You use it and I use it.  One difference might be that I am entirely ashamed of my involvement in Twitter.  But I’m not the only one who has his hands covered in the blood of one of societies failed experiments.  Many of these aftershocks affect all of us.   Of course when it comes to my Twitter account, people are simply drawn to me because of the truth I was born to speak.  Nonetheless, I present to you the Top Reasons why Twitter Blows:

#4.  Corporate News forcing their Employees to be “Hip”

Watching the talking heads on the News channels try and utilize Twitter is like watching fat people have sex.  Horrifying to behold and yet oddly fascinating at the same time.  Too often a once respected news anchor suddenly interrupts his otherwise intelligent commentary to mention that Buttocks555 thinks the recent Canadian election is “a total waste 4 U”.   Great, just what I want.  Another uninformed couch potato getting a chance to voice their worthless opinion on national television.   I can only pray that the machines rise up soon and kill us all. 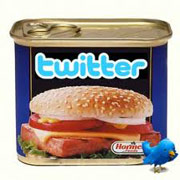 #3. Spamming “Internet Marketing Coaches” want to be your friend

Who are these people?  Can we form a cyber-posse and go after them with pitchforks?  Clearly these wastes of human potential are nothing more than spamming sacks of filth.  Seriously, anyone who uses Twitter to sell a product is either a freaking retard or high on some cheap 80’s dope.  I look at my Followers and yes…I have succumbed to my own failure as a human being and followed some of these “coach” bozo’s back.  Maybe I’m inwardly insecure and want my numbers to increase to wash away my failures.  Lord have mercy on my tainted soul…

It’s not just all of them, it’s me too.  I have a whole whack of followers and honestly, I really don’t care who you are, what you’re doing, or even if you’re tied to a train track and a quick call from me could rescue you.  Facebook at least has some familiarity for their users.  Twitter has none.  Yet despite that painful and obvious fact many think that their Tweet jokes are absolutely hilarious, their insights mind-boggling and their followers hanging on every word.  Indeed, Twitter is a unique environment where someone can get tens of thousands of followers and literally none of them could pick their top dog out in a police lineup

Nobody reads your tweets.  You don’t read anyone else’s.  You think I care?  Pffft!  You’re all just walking bags of Soylent Green to me kids, so don’t cry about the fact that I look upon your tweets with a thick veneer of hatred and loathing.  Yet we still ask people to join, and people ask us to join them.  Spock wouldn’t even comment on how illogical this is, he’d just curl up into a ball until his head exploded from the insanity of it all.  It seems Twitter will survive until such time as people finally understand that their fellow man honestly doesn’t give a crap about their one sentence observations.

Where do we go from here?

For those who claim language is evolving, social experiments like Twitter are a slam dunk rebuttal.  We’re clearly not evolving but rather breaking down into our base components of knuckle dragging stupidity where the future Dictionary will be reduced to three pages of grunting noises.  I can only cower in terror on what the next big step in social networking will be that disconnects us further from reality.  Instant messaging to our cerebral cortexes?  Surgically implanted iPods?  GPS devices hidden in our rectums?  Share my journey of fear, or at least strap on the nipple clamps and share my pain.