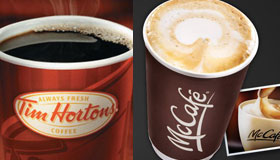 Let me tell you a little something about your friend the Dysfunctional Parrot: I don’t have a refined palette like a bunch of high falootin’ wine-tasters.  A $5.00 bottle of Baby Duck from the Liquor Barn is just as good to me as an imported $50 bottle of Pinot Noir.   Upon reflection I must blame my simple and utilitarian nature on being the son of a hog farmer. 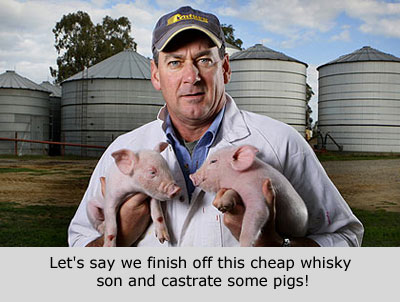 But when it comes to coffee I know what works.  Mainly because I react to caffeine like a toddler reacts to a shot of tequila.  So based on my unique physiology I am going to answer the eternal question once and for all, which is better:  Tim Horton’s or McCafe?

To be sure, both are comparatively speaking to more expensive blends, complete crap.  But then again this is a battle for the king of the dung-heap.

This coffee is going to be black.  No sugar or cream to water down the experience and neuter the cup-bearer.   I want this raw and yes, once again I must reinforce that I like my coffee the way I like my sheep…black. 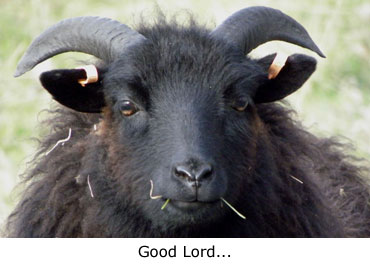 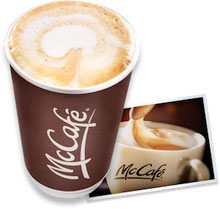 First Sip:
The initial sip of a McCafe hits you like a slow wave.  Nothing shocking, no heavy overtones.  And that’s pretty much where it ends too.  It’s a steady ride to the finish.

Aftermath:
McCafe sits well in the gut, very much counter to McDonald’s previous incarnation which was pure, unadulterated sewer runoff.  I know this because as a kid I worked the counter and had regularly had to divert the flow of grey water into the coffee grinder in between picking Filet o’ Fish patties off the floor and staring at my female co-workers hind-quarters because they wore pants one size too small.  Sorry, what was I talking about again? 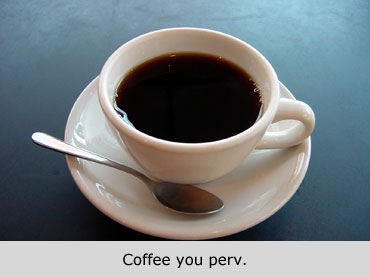 Uh, right.  Anyway, McCafe is like a slow release hit to your system while I will demonstrate how Tim Horton’s is like a railroad spike to your frontal lobe.  That’s not saying one is any worse or better, but they do have different roles to play.  If you need a slow wake up before going to work the McCafe might be your choice.  If you need a sudden jolt because you’re 14 hours into a 20 hour truck drive then it’s Timmy’s all the way.  Speaking of which…

First Sip:
The first slug of Timmy’s is admittedly, very pleasing.  Despite the reality that there is no MSG in Tim Horton’s coffee ( thanks internet for more idiotic “facts” ), you’d swear there was something in this that told my innards otherwise considering how it hits my bloodstream like a brick through a windshield. 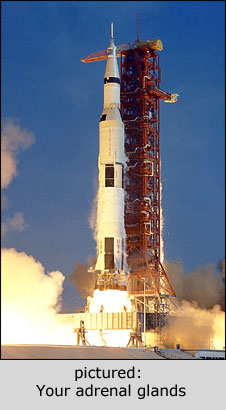 The initial heroin-like high of Timmy’s coffee will have you feeling like your mouth is dancing with angels but it is also met with equally great lows.  I liken it to a can of Cola.  The first cold sip is great, but by the time you get to the bottom of the can it is reduced to warm sugar water and thus goes from being a pleasure to a duty.

End of Cup:
What was initially a wonderful flavor has now become a test of will to finish.  I’m guessing the dramatic shift happened around 3/4 of the way through the cup.  By the time you get to the end things start to loose their initial appeal.  When the last sip comes you will be thankful it is over, not unlike a colonoscopy from a Dalek. 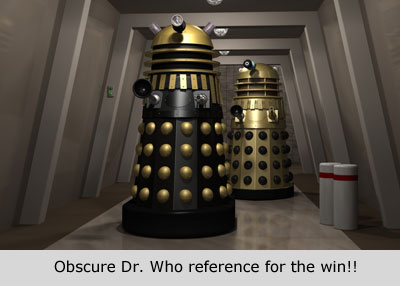 It’s a personal choice.  A slow yet enjoyable carousel ride or a pants wetting roller coaster to the top ending in a spike pit drop.  McCafe is an average coffee on the go and wants to market itself accordingly.  Tim Horton’s pushes the “early mornings at the hockey rink” image and true enough, you’ll need the extra energy to curse out the away-team for being the unmotivated little twerps that they are.  Blasted little league players.