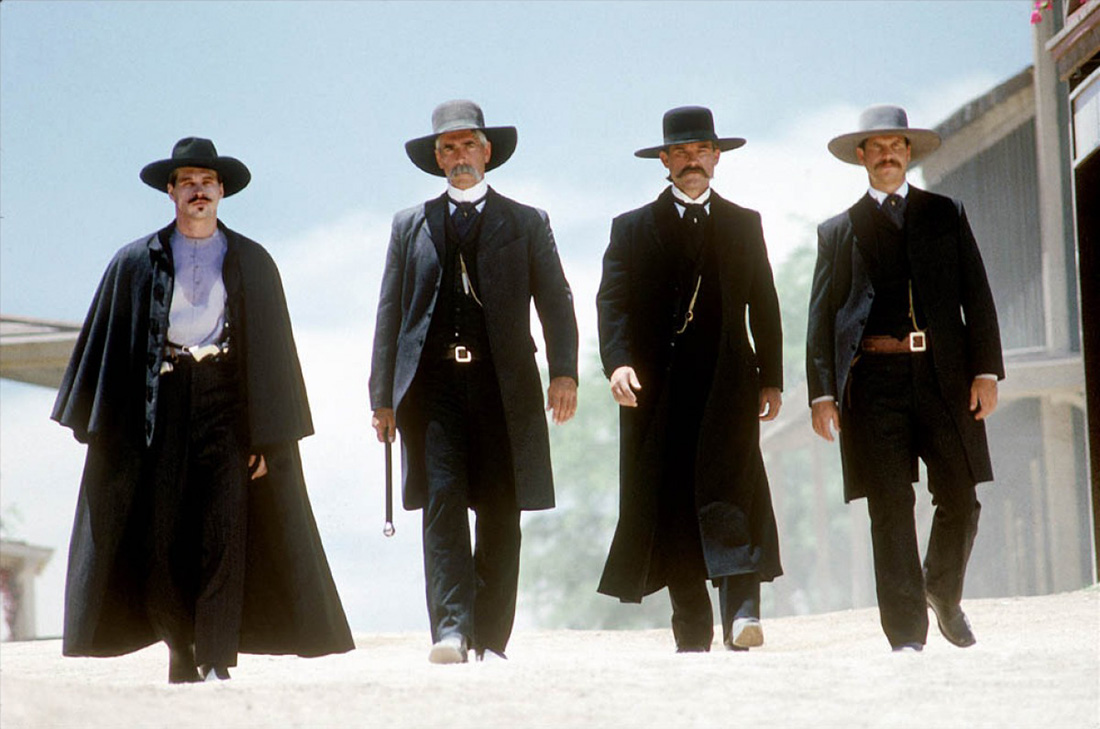 If you’ve followed my advice up to this point, you’re probably in a world of trouble.  Remember when I said fighting back against a bully is the best policy?  Well, there can be a caveat to that.  Sometimes the bully decides to bring in the cavalry.   You may have self-respect and good intentions, but unless you have Wyatt Earp and a posse of your own to round up, things are about to get bleak rather quick.

My posse consisted of one friend, Barry.  Just.  Barry.

During the early summer of 1988, it became abundantly clear that my social capital in the community had come to an abrupt end and I was dipping into the overdraft.  My newfound courage to fight back also made me a moving target.  If one person couldn’t take me out, it seemed a group was formulating a plan to do so.   Individually, nobody would risk the first punch because rumor had it, I was in karate.  Back then that was akin to having mystical powers, or so I made it seem by having an overconfident swagger.  But at some point, someone was going to call my bluff.  It was improbable I would be on the winning end of that exchange, and impossible I could avoid it for two more years.

It was also the time I was starting to think more about girls.  A lot more.  This was probably due to “I Dream of Jeannie” reruns kick-starting my hormones, so I accept only partial blame.

I also realized that not a single eligible female in this dust-ball town would go near me.  Well, not one with decent teeth anyway.  Not to mention, the idea of returning for two more years of high-school made me physically ill.

The school year ended and I spend a great deal of time hanging out with Barry.  Barry was somewhat overweight and had all the motivation of a glass of water.  But we shared a common interest in cars, computer games and completely unattainable women.  Barry also had the most bitchin’ car ever…a metallic green Mercury Bobcat.  It only had a four cylinder, but the stick shift made it so cool to drive.  I think I loved that car more than he did.  We would go to Winnipeg almost every week for no other reason than to just get out and play the Beverly Hills Cop soundtrack cranked up.

Barry also had a job tailor made for him; sitting on his duff in a tour booth as you enter the town.  Every now and then some schmuck would need a map and Barry would do 30 seconds of effort.  The rest of the time we read comics and wondered how we could survive the next school year.

Around this time I also got a summer job doing part-time work at a McDonald’s in the big-ol city of Brandon.   To me, this was Metropolis, although it was also an hours drive away.  It was weird…people I worked with liked me.  Girls would talk to me.  And every now and then we would chat in the lunchroom which would always bring up one question.

“Which school do you go to?”

And we’d talk.  If she turned her head I’d grab a quick glance at the wild sweater muffins.  Then later during another lunch break I’d talk to another young lady.  This was becoming downright habitual.  I’d mention my hometown and nobody knows where that even is.  These kids all go to the big city schools.  I imagine how neat it would be to go to school with these people instead of…

Suddenly a crazy idea takes root in my brain.  Yes, this might actually be possible.  Once again I sneak a quick glance at youthful bosoms and have two firm reasons to put my mad scheme into action.  But first I needed to run my idea by a trusted confidant.  The only person alive who could possibly have the insight and intelligence to see things my way…

Barry sat in the tourist booth eating a muffin, gawking at the latest Punisher comic and occasionally passing gas as a sign he was still alive.  It was a day off work for me which meant I hung out with Barry and pondered life’s mysteries.  Like if Mr. Fantastic ever got a pulled muscle or if Superman and Lois could ever really have kids.

“You know, at work yesterday I must have spent a whole half hour talking to a babe.”

“She have nice hooters?” Barry says, barely taking his attention away from a comic book.

“See, this is why you can’t make head-roads with women.  Your crudeness aside, I prefer to remain a gentleman,” I say.

He turns to look at me like I’m full of it, as I clearly am.

“Yes!  They were freaking amazing!”

A few moments pass, as does more of Barry’s internal combustion.  Whatever he’s eating, the man needs to stop.  I crack open the door to get some fresh air and conclude it’s time to put my plan into motion.

“Dude, if I have to spend one more minute in this hayseed town I’m going to set myself on fire,” I tell him.  Barry understands all too well.  He’s less than thrilled with the place too.

“Well unless you’re going to run away and join the circus, you better just accept it,” he says.

“Do we?”  I raise an eyebrow and shift to salesman-mode.  “What if I said I was thinking of graduating somewhere else?  Like Brandon.”

“You’re going to drive an hour to Brandon every day for school?”

I smile.  “What if we got an apartment?  Think of it!  Me, you, the big city and none of this garbage.  No more small-town and stuck-up girls who won’t give me the time of day.”

“Barry…Bartholomew…we have to do this.  Destiny demands we do this!  Man, I’m even starting to think your sister is cute.”

Suddenly the inspiration takes over and I stand like I’m about to break into a scene from Shakespeare.  “I want to wake up and smell the freshness of dreams come true!  I want a woman who isn’t my mother or sister…or yours, to stand in my personal space and want to be there.  I want to get all up in it yo, even though I have no idea what that even means.”

I reach for a couple of bran muffins and fondle them gently like endangered tribbles.  “I want the radiance of warm hooters shining on my face like the noonday sun!”  I bite into a muffin and pause like its pure ambrosia.

Barry’s face becomes very serious.  Like me, I know he often pondered the anatomical complexity of a fine set of hooters.  I drive the stake home, “Clean slate, dude.  I’m not Ralph Macchio’s discount stunt-double and you’re not, well…Barry.”

He’s sold, but not without reservation.  “Parents.  No way they’re going to accept a couple of seventeen-year-olds doing this.”

I sit back on the bench and give a cocky grin like I know what I’m doing.  I really don’t.  “Oh ye of little faith.  Leave that to me.”

To my parents credit, my degrading situation had been something they were also concerned about.  When a simple “How was your day?” becomes “So, any fights today?”, things probably could be better.  I think that background made the following conversation go much easier than expected.

First, I had to get them together in the living room for a family one-on-one.  These didn’t happen often at all.  In fact, the last time it did was when my then seventeen-year-old sister said she was pregnant.  They momentarily wondered if I had knocked some girl up, but then laugh to themselves at the absurdity.  This kid had the sex appeal of Napoleon Dynamite and wasn’t getting anywhere near a female reproductive system.

“Mom, Dad…what would you say if I wanted to graduate from a Brandon high school?”

The idea is not dismissed outright.  In fact, they slowly say that it might not be a bad idea.  Wow, that was easy.  What a couple of suckers.  Time for phase two.

“I think it’s a great idea.  I know some kids who tell me Vincent Massey is a good place.  Of course, it’s a long drive to make every day.  Soooo…”  I take a deep breath and make every effort to sell that Indigenous northern native a fridge.

“Me and Barry were thinking of renting an apartment.  Roommates to share the cost.”  There.  I said it.

They sit there and look at each other and nod.  Wait, are they agreeing this quickly?  Was I that impossible to live with?  I conclude that being an insufferable dick really does pay off.

“On one condition,” my Mom says.  “You both graduate.”

“I’ve already got the school picked and I’m absolutely not going to be a dropout.  Deal.”

And just like that, with no arguing, I got the green light to start over and leave home at seventeen.  It seemed a little coincidental that my parents were soon dancing in the living room and spraying champagne on themselves, but like Cheap Trick says, Mommy and Daddy just seem a little weird.

The next day me and Barry scour Brandon and bag a nice two-bedroom apartment on the south side.  We would move in during August, and school would start in September.  I managed to get more work hours selling cancer-sandwiches and everything was firmly in place.  It didn’t just feel good.  It felt euphoric.

Barry likewise secured the same deal from his parents.  But I knew things were strange when I went to my new high school to do the application paperwork.  Barry never came with me.  In fact, Barry never bothered to do any application at all for any of the schools.  It soon became clear that Barry was not going to finish high-school but instead opt to be a dropout.  Knowing this, I did the only honorable thing.  I kept my fat mouth shut.  I did not want my parents to find out and pull the plug on my operation.  I would tell them…after they signed the forms.  Maybe.

My first walk through Vincent Massey High on registration day blew my ever-loving mind.  It was a monstrous school compared to what I had grown up with.  My mom accompanied me to sign forms since I was still legally a minor.  All I knew was that as long as I could get dear, sweet Mother to sign on the dotted line, I could get back to more serious business like sticking my bare ass out a car window and saying goodbye to Hicksville.  Come on, sign it.  Sign it you gullible sucker…come onnnnn…yes…Ha!  Done!

We got a tour where the designated staff showed me the facilities, in particular the art room.  I was floored by all the high-end equipment and signed up for that class right away.  Mom had a sense of peace about it too, seeing her boy happy and free of the schoolyard BS that had been my life for so many years before.  I looked around and saw tons of other parents with their kids during orientation as well.  And by extension, lots of girls.  Yowza, there must be like, hundreds of them!

The warm feeling in my heart, and groin, was all I needed to tell me the next year was going to be great.

Still, I needed to make one last, and somewhat illegal, goodbye…

To be continued in Part 5:  Never Insult a Ninja

THIS HAS BEEN AN EXCERPT FROM THE UPCOMING “SELF-HELP” BOOK BY JOHN PAUL PARROT.