It’s me again, the Dysfunctional Parrot.  Some of you know me as the most trustworthy fitness expert in cyberspace.  Others know me as that dishonourable Gaigin dog who said something bad about their martial art once and therefore needs to be stoned to death with bonsai trees for the betterment of all mankind.  Clearly, the internet is a fickle mistress.

Given that I occasionally point the finger at the goofy world of martial arts, it should also be made known that I only do so because you fight the most with the ones you love.  But relax and allow me to demonstrate how I’m really not all bad and bask in 5 Reasons TaeKwonDo is straight up awesome.

For the purposes of clarity, this article is referring to WTF ( World TaeKwonDo Federation ) style TKD.  ATA style TaeKwonDo is not now nor ever will be awesome.

Traditional martial arts are incredible.  Karate movements take TKD moves to the damn cleaners.  They are sharp, fluid, amazing and nothing is there that should not be.  When that reverse punch is coming, that sumbitch is going to connect with legendary force.  Yes, traditional martial arts have the power, but they also have one small problem.

They are also boring as all Hell.

WTF TKD saw karate and said “hey, what if we added some spin and a cheap polyester uniform to that?”  Thus a new martial art was born.  As a die hard traditionalist, I find flashy kicks to be the epitome of useless fluff more apt to get yourself killed than providing an effective defence.  But you can’t deny the skill level involved in pulling some of those acrobatic kicks off.  Doing a flying spinning back kick and breaking a few boards is actually kind of neat when you think about it and most karate-ka wouldn’t come anywhere close to being able to do a stunt like that.  Also, can you imagine if someone connected with one of those haymakers in an actual real life situation?  It would be awesome.  It would be like winning the lottery.  They should write songs about that person and have it sung by Vikings.

So yes, there is tremendous skill involved in TKD fancy kicks that have the potential to pack a hearty dose of Vitamin Wow.  Just please, don’t BS me in the comment section about how you or someone you know managed to do a 360 spinning back kick and took down a gang or roaming thugs only to stand over their bodies as the sound of oriental pipe music filled the night air.  They were either comatose or Scottish-level drunk.

#4. Family is not a liability

As someone who spent most of his training in hyper-traditional karate, I can honestly tell you that family is seen essentially as a liability.  Don’t believe me?  That’s because you’re either unmarried, under 18 and living at home, or full of Gaigin feces.  In fact, the number one reason people leave karate is because they get married and have kids.  Naturally I have no statistical data to back that up.  However, neither do I see any evidence to the contrary.  Seeing as this is my site I guess that makes me right. 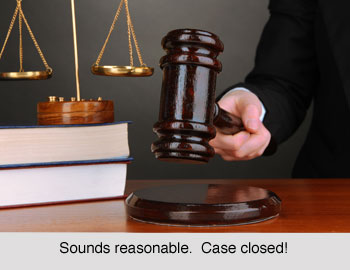 TaeKwonDo?  Hell, bring the kids!  Who cares if they’re still in diapers!  TKD doesn’t see age as a liability, they see it as a business opportunity.  TKD doesn’t seem to have a problem taking itself so darn seriously that they cannot understand that families exist in a post-Shogun society.  For me, having kids was the final nail in the coffin for my karate training.  And no…it wasn’t one dojo.  I’ve been in a ton of dojo’s across Canada and I can truthfully say that karate is very family unfriendly compared to TKD.  Only when your kids reach past 12 are they seen as potential members and not little sacks of dishonour that take your time away from pledging allegiance to a dead Okinawan.

Finally, be honest with yourself people: none of us martial artists are as good as we think.  Ahh, I saw you crack a smile!  Even GSP must submit to the Louisville Slugger with a nail driven through the end.  So given that we are most likely not training to be Navy Seals or Israeli Commandos, why not have fun with it?  It’s either that or your kids rotting the remaining remnants of their 8-bit brains away on Minecraft. 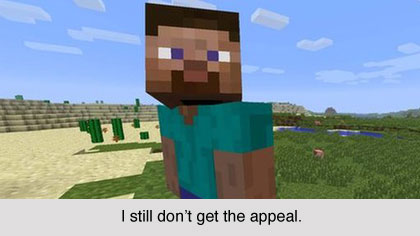 Many TKD clubs have opted to spice things up to stem the tide of people who walk out the door never to return.  Brazilian Ju Jitsu classes?  Sure!  My old TKD club even had some P90X classes which ultimately led to me quitting because why would I pay to do an at home workout somewhere else?  Nonetheless, their intentions were good if not somewhat shortsighted.

Personally I despise this kind of gimmickry with the red hot intensity of a collapsing star and think stupid badges in “BJJ” do more to make the practitioner look like a Harlem Globetrotter than a serious martial artist.  But then again the numbers don’t lie.  My die hard traditional Shotokan Karate club had a strong core of devoted members but the biggest dojo I attended maxed out at maybe 30-40 students.  Many TKD clubs double or triple that with much larger registration fees to boot as well as providing multiple classes for different age groups on the same day!  Evidently people dig variety.

Another huge point for TKD is weaponry.  Yes, this is not exclusive to TaeKwonDo by a long shot but it is a plus nonetheless.  Now I don’t know about you, but a lot of clubs in Canada teach nunchaku once you hit black belt.  That is straight up awesome.  What will be less awesome is when the Mounties haul your ass away for using an illegal weapon in a fight, but don’t bore me with such trivial legal details. 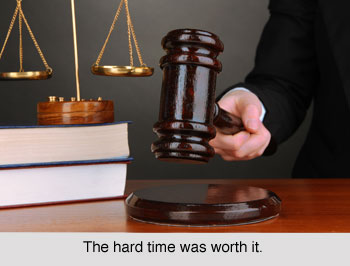 Other clubs give the option of escrima sticks.  Or bo staff.  Or whatever that bamboo sword is called.  The point is that TKD has no problem throwing in some good old fashioned toys into the mix and they should be congratulated for it.

#2. Who said a black belt has to take X number of years?

No really.  Who made up the rule that a black belt had to take a certain number of years to obtain in order to be worthwhile?  I’ll tell you…the style that made it take just a bit longer so they could feel superior.  In other words, guys like me of ten years ago.  You know what, screw those people.  If someone out there is keeping score then that person needs to take a long look in the mirror to see the obsessed martial arts loser they have become.  Quit your dojo, tear down the oriental imagery in your homes and throw the bonsai trees to the composter. 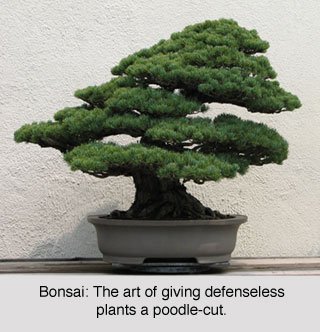 I’ve said it before but it bears repeating that a piece of cloth around the waist has no value apart that which the owner bestows upon it.  The most reputable combat training has no belts whatsoever.  None.  So to be consistent it would therefore stand to reason the belt has no value at all outside the dojo walls.  It cannot be used on a resume or college application unless you want people thinking you’re some kind of total weirdo.  Just lie and say you’re into sport-fishing, carpentry or at least something well adjusted folks enjoy. 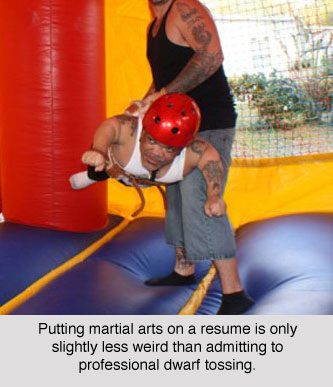 So do you have a black belt in TKD and it only took you two years?  Good for you.  You probably have amazing kicks, have a had a lot of fun and even had some bonding moments with your kids.  And odds are you didn’t even have to become a martial arts nutjob to get there.  If that’s the case then in the grand scheme of things you’re ahead of the game.  Just remember that if your black belt is in ATA, it actually has negative value as technically it is not really a martial art.

Ok, your mileage on this one will vary radically, so if you come from a great dojo run by normal people then give yourself a polite golf clap.  Now, for the rest of us 99%, let me tell you another thing about traditional training…they will punish your dishonorable ass should you take a hiatus.  Twice I took a one year break and twice I was received with a certain level of suspicion and oh yeah, once even a demotion.  Wait…they can do that?

Sigh, no problem though.  You get knocked down you get back up again right?  That’s just what you expect for Kyu ranks but once you hit the big Shodan you start to feel a bit resentful.  At Nidan even more so.  I mean, you PAID for that test not to mention those completely indecipherable certificates on the wall which cost a pretty penny even though they probably never came from Japan and took almost a full flipping year just to be shipped up from Philadelphia…damn you ISKF. 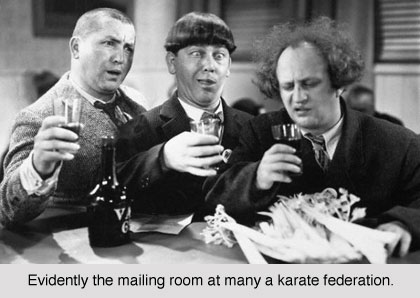 Walking back into TKD is a little easier I found.  Need time off to be with the family?  Have a kid?  Climb Mount Kilimanjaro and brag about it on Facebook even though you only made it half way up?  The WTF TKD clubs I went to were all cool with that.  No attitude and not even a rank demotion, just picking up where you left off with the expectation you will need time to get back up to speed.  Hey, that’s all one can ask for!

You can even move from dojang to dojang with no problem.  WTF TKD membership is like a passport.  If everything is in order, then come on in and have a seat!  In karate, screw you.  Your previous credentials are met with scorn and summarily set on fire and extinguished by being pissed on by yellow belts.  OK, maybe I’m exaggerating just a bit there.  But often when I mentioned my old instructor I got the “oh…that guy.  Well we do things differently here”.  Of course the training was never any different so I have no idea what any of them meant by that.  Sadly I was never good at politics which ultimately led to my undoing.

I still see this today.  In fact most comments on the martial arts articles come from many other styles generally saying “Your style was bad. My style is good”.  This is a very common example of the infighting within karate.  Especially when Kyokushin-Ryu is in the room. 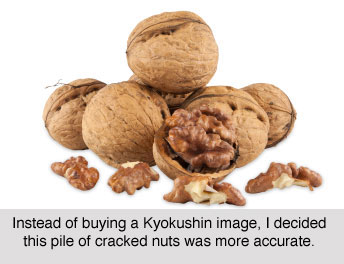 So there you have it.  While WTF TaeKwonDo is certainly not without its major problems, take comfort in knowing that in many ways it is still a pretty decent way to spend a weekday evening.