As a rule, I despise diet plans with the fire of a thousands suns.  They all seem to follow the same path of living on the extreme.  But I guess that’s a by-product of our society that does this with everything anyway.  Never is this more obvious than the vast majority who eat the standard North American Diet and are pork licking tubs of lard who eat meat like it was the only food in existence.

First you may be asking: WHAT IS THE HALLELUJAH DIET?  According to their site, it is a vegan diet plan based on Genesis 1:29 and thus they call it “God’s Ultimate Diet Plan”.  Oddly enough, they ignore Leviticus, which goes very much in detail regarding the foods God gives the thumbs up ( ie. kosher ).  But I’ll get into that in just a bit.

Unlike many who would critique this system, I have firsthand experience with the Hallelujah Diet.  I have family members and friends on it.  And yes, it is overall a good system.  Kind of.  Allow me to elaborate with 5 things you should know while at the same time hoping everyone I know who is on this diet doesn’t read this article.

Let me state first that I am indeed a God-fearing Christian.  And as such I was willing hear out Dr. Malkmus, the founder of the Hallelujah Diet, through several of his many videos presenting his new way of stuffing food in our pieholes.   I should also state that Dr. Malkmus is not actually a medical doctor, but instead a theological one.  And even then, a very questionable one.

Let me also state that I am a habitual theology junkie.  That means I make Jehovah’s Witnesses and Mormons cry on a regular basis.  It also means that I have many, many problems with Dr. Malkmus’s use of Bible verses to justify his expressly vegan way of living.  For example, using Jesus’ reference to being the “bread of life” should never be taken in a dietary view.  That’s just common frigin’ sense.  But he does stuff like this repeatedly…taking Bible verses out of context and using them to push his product.  Thus, his obviously flawed hermeneutic is so either by incompetence or intent.

My point is that if you’re looking for a Biblical justification to go 100% Vegan, you’re just not going to find it without some serious interpretive acrobatics.  But also true, you won’t find anything AGAINST it either.  It’s just an argument from silence.  Somehow I think Moses and the prophets had bigger issues to convey. 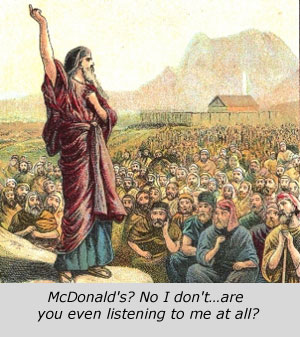 If I wanted to pull the theological dietary trump card, then the Bible’s book of Leviticus is pretty much the death blow to any notion that the Hallelujah Diet is God’s chosen food plan.  Leviticus, although forbidding meats such as dog, pig, scavenger birds, shellfish and your Grandmas’s liver-patte, does explicitly allow for poultry, eggs, cheese, dairy and proper types of fish.  Vegetarian it is not.  And Vegan?  Not even slightly.

If you eat like most Americans then you are statistically speaking, a fat un-kosher slob with bacon fat running down your chin.  Weighed down with McDonald’s slop, processed foods and a near complete absence of fruits and vegetables will leave you ripe for the picking when the zombie horde rises. 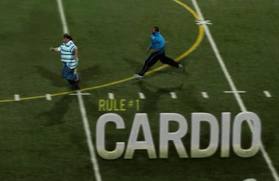 For these people the Hallelujah Diet will initially give health gains never thought possible.  Weight loss, increased energy, a positive attitude and erections you could hammer a spike with will all be welcome signals that the body is ready to chew bubble gum and kick ass.

Just watch out for the sudden drop once you fly too close to the sun.  That happens about 2-3 years in when your body has completed its swing to the other side of the pendulum.

The reason for this is simple.  As a society we live on the extreme.  Our typical North American diet is one extreme and Hallelujah Acres is the other.  While you are moving from one extreme to the other you will feel great as you pass through the middle.  Unfortunately, when you arrive on the other side you are in the same mess you were in before.  Malnourished and prone to illness.

That’s why people who have abandoned veganism likewise initially feel great…until they complete their meat-scarfing journey to the other side.  Then the vicious cycle repeats when old health problems re-appear.

Your body is actually a pretty smart thing.  For the most part it knows what it wants nutritionally, and will punish you mercilessly like a back alley thug if you ignore those warnings.  Ignore your fruits and vegetables?  Enjoy your mid-life tumor.  Ignore your moderate intake of heathy meats?  Good luck getting out of bed in the morning.

Me and my wife were quite successful at doing the Hallelujah Diet for a while until we arrived on the other side of the extreme.  At that point my wife’s IBS ( Irritable Bowel Syndrome ) became an issue, and my ability to do the workout programs I love so much ( P90X, Insanity ) were starting to back off from the gains I initially had.  We were confused.  We were so healthy doing this system, so why was it failing us now?

This turn of events also came with a symptom.  A hunger for the roasted flesh of defenceless animals.  This left us with 3 options…

Odds are many take options 2 and 3. If you can choose Option 1 then congratulations. You have just found the middle ground.  Give yourself a cookie.

To complete my story, my wife’s IBS practically disappeared when she had a regular intake of clean meats such as poultry.  Thus we now live a mostly vegetarian lifestyle with moderate ( that word again!! ) amounts of good clean meat.

#2. Why Are We Supplementing “God’s Diet” Again?

For a diet that supposedly is all you ever need, Hallelujah Acres sells a lot of supplements.  To me this is the red flag that signals the obvious:  This system is trying to fill the gaps with pills and powders.

As a rule I have no problem with supplementation such as whey or creatine.  But the point is that supplements are supposed to “supplement”…not become the primary source.  Without B-vitamin pills your intake under the Hallelujah Diet would be jack squat.  Normally I wouldn’t nit-pick like this, except for the “God’s Ultimate Food Plan” label they give themselves which to be honest, sounds like a snake-oil label from the start.  HAcres can deny it all they want, but the fact is humans are omnivores.

OK P90X-fans!  Guess what…Tony Horton has a diet that lives in the middle.  That means by his own words he is primarily a vegetarian, but understands occasional ( the bold print is for a reason! ) consumption of clean meats ( ie. no red meat ) like fish, eggs and poultry.  The guy is in his 50’s and has better health than many athletic 20 year olds, so I’ll assume he knows a thing or two.  Shaun T of Insanity/Asylum fame is much the same way.  These guys are professionals, and they are successful at their craft because they do what most people cannot: live with moderation in the middle.

Contrary to popular opinion, elite athletes do NOT eat a ton of meat.  But they do eat it nonetheless.  This is a difficult for our society of 6-pack drinking and 2 pizza eating garbage-hounds to comprehend.  Yeesh, we’re so messed up that when we think “protein” a vast majority of us thing a cheeseburger is a viable choice. 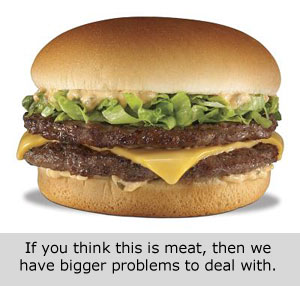 Now I’m also not saying someone cannot be a fit vegan.  Daniel Mite for example will kick any of our butts.  But it makes your food lifestyle unnecessarily difficult.

To conclude, the Hallelujah Diet is indeed a good diet as long as you dispense with the strict veganism and sneak in occasional clean meat sources such as once per  day.  It’s also good if you’re on one end of the burger-scarfing extreme and need to get your act together fast due to major health issues.  Just realize that you will need to adjust your food intake again later and spend some time working to stay in the middle.

If you do choose to go this route, I just ask of you one small favor.  Don’t call it “God’s Food Plan”.  Please.