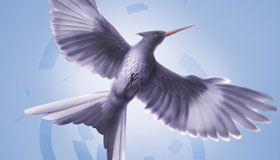 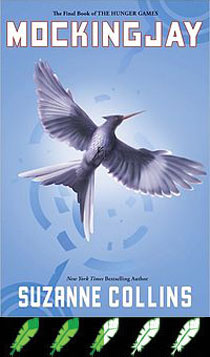 I understand how they made the book Hunger Games into a movie as there was a lot of material to work with and it played off that teen angst pretty well.  Catching Fire was a book that tried to basically do the same thing as the first book by throwing Katniss into the game ring again with Peeta and trying to keep that weird “loves-me-loves-me-not” thing going between the two of them.  And the third and final book, Mocking Jay, is about, well…let’s just say the series ends on a low note.  I’m not saying Mocking Jay sucks or anything.  I’m just not sure it deserves the accolades it it receiving.

In case you haven’t read it, Katniss joins the resistance in District 13 after District 12 is pulverized into near oblivion.  Although she was rescued from the games in the previous book, Peeta is instead now being held captive in the Capitol.

Mocking Jay then becomes a novel about Katniss putting on the face of the resistance to strengthen the resolve of the rebellion and after a while it becomes sort of ridiculous.  But in some ways it plays up to modern conflicts such as them being televised and heavy on propaganda.  Not unlike the Gulf Wars.

Unfortunately Mocking Jay feels rushed, as if the writer ran out of steam and as such many loose ends are not resolved, or are done so way too fast to feel satisfying to the reader.  The deaths of two main characters for example, President Snow and Katniss’ sister Prim are handled in maybe a couple of sentences.  Heck, Snow’s death is merely a recap and that seriously takes the wind out of the ending.

There are some good highlights however.  The effects of Peeta’s interrogation and torture are well handled as are the hidden intentions of the resistance.  The love triangle falls completely flat compared to the first book because for reasons I cannot fathom Katniss clings to her old friend Gale who has the romantic appeal of a grapefruit and also loves Peeta who is now a psychopathic ex-fake boyfriend.  The girls messed up!

No two ways about it, Katniss is a tease.  Plain and simple.  But that seems to be what sells these days with angst two-timing trollops like Bella in Twilight.  So in that sense, I weep for the women of tomorrow.

The final chapter with Katniss and Peeta feels like you’ve been airdropped into the middle of a different story.  I would have appreciated some resolution instead of hey, guess what…they got married!  A few extra pages to clear things up and avoid confusion wouldn’t have hurt.  They also have kids too, which at least means after the end of three books they finally moved past the whole “kissing” stage into some humpty action because that stuff was getting kind of repetitive.

Rumour has it this will be made into a 2 part movie finale.  No two ways about it, that’s just a straight up cash grab as there’s barely enough material in this book for one movie.  But that’s Hollywood for you.

Mocking Jay, while satisfying to many fans simply feels rushed and lacks the same intensity of the first book.  Therefore the final score is 2.5 Feathers out of 5.  Not bad, but not really good.  Just an average read and kind of a slow end to a series that had a much stronger start.