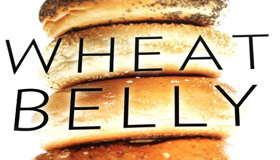 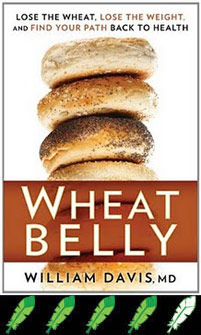 William Davis, M.D. knocks one out of the park with Wheat Belly.  If there’s one book today that can change the health of America, this one certainly fits the bill.  This book takes everything we thought we knew about whole grains and health, and turns it upside down.

Dr. Davis makes his case that wheat as we know it today has little in common with the wheat of old.  And it is this modified variety we now have that is pure poison to our bodies and contributes to visceral fat ( abdominal fat ) due to the insulin spike it gives.  And I’ve seen this spike as I myself had it many years ago.

Rewind to ten years ago.  Me, the not-yet-Dysfuntional Parrot is in the doctors office.  My blood sugar sucks.  My health sucks despite regular exercise and a well rounded diet.  Doctors had nothing for me but a pat on the head and a future with insulin medication.  Next patient please.

I then went to a naturopath and one of his recommendations was to lose the wheat.  Things started to happen.  Belly fat evaporated.  Energy levels up.  Blood sugar levels stabilized.  I’m now doing online fitness reviews by actually doing them for Pete’s sake!  So from experience I can say this book speaks truth about how wheat screws with your blood sugar.

The book starts off with some history.  Around the 1950’s wheat changed due to manipulation and son-of-a-gun…America rapidly became the diabetic, fat slobs they are today.  And it doesn’t stop there.  IBS, celiac, psoriasis, compulsive hunger, and the explosion in gluten intolerance all testify to what is happening.  When your intestinals and blood sugar go crazy, your whole body literally falls apart. Wheat quite honestly, is killing us.

And don’t think substituting for gluten-free foods will get us off the hook.  Dr. Davis shows how replacement flours have just as bad an insulin spike, if not the near heroin-like addictive reactions of wheat.  This evidence for wheat’s addictive nature are presented as being mind-altering, triggering the same sensors in the brain as opiates.  And if you doubt that last statement, ask someone who is desperate to change their heath to maybe go off wheat.  Odds are they’ll find every excuse to not do so and would rather be fat.

What’s worse is the stuff that gets passed off as “whole grain”.  That “healthy” whole grain loaf at your store is quite honestly, pure unadulterated sh-t.  You think Dempsters and Wonderbread are actually good for you??  Yeesh.  If that’s the case then this book is definitely for you. 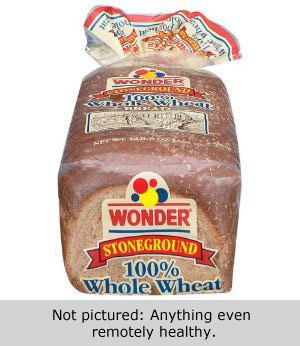 Bottom line, our nation needs this information really, really bad but we’re instead being told just the opposite.  Wheat and gluten are killing us and making a nation of fat wheat-addicted junkies.   And don’t expect help from the American Diabetic Association.  The ADA is stuck back in the 70’s and are clueless as they encourage a diet rich in “whole grains”.  They pursue a cure, not understanding that prevention is worth a pound of it.   One thing is certain, if a cure means being able to eat crap, I doubt one will ever come.

According to this book, the solution to these problems begins with the first step:  Eliminate wheat in all its forms.  Breads, cereals, pastas.  100%.  The whole shebang.  This isn’t a partial removal, but rather an all-out abandonment of all things wheat.  And from experience, it’s not as bad as it sounds.

My only real complaint about Wheat Belly is the pace of the author.  He repeats himself a little too frequently and he drags a bit more on the second half.  But if you’re the kind that is slow to be convinced, this may work in your favor.

So if you’re having one Hell of a time getting rid of that gut, maybe its time to try something a little radical.  Stop doing what you’ve always done.  As such Wheat Belly is not so much a slap in the face, as much as a firm jiggle of our love handles to get our attention to a potentially grave situation.