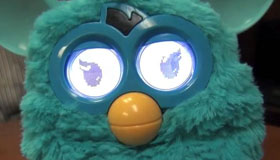 Every Christmas we ignore the global oil shortage and buy our personal mountain of plastic.  But some plastic is just so much more useless than others and as such I bring to you the Top 5 Gifts that are utterly worthless yet are tragically flying off the shelves.  Sadly, many of you have run out to buy them all.  For shame.

You know why everyone wants a Furby?  Because they’ve been told everyone wants a Furby.  Welcome to the epitome of useless recycled 90’s gadgetry.  If you don’t have even a tingle of buyers remorse after spending your hard earned cash on this pile of plastic and faux-fur, you need to be removed from the gene pool right now by any means necessary.  Preferably by getting stuck in a combine, but that’s just my personal preference. 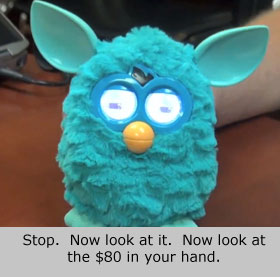 It’s as if we haven’t learned a damn thing from the Tickle Me Rot in Hell Elmo.  Or the Cabbage Patch kids.  Crazes like these prove we need to work on honing our kids abilities to resist impulse purchases or they’ll spend the rest of their lives in living in our basements and unable to put a downpayment on a house. 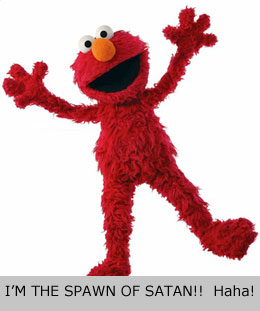 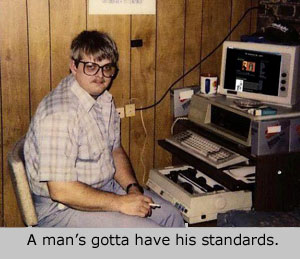 But give those Swedish programmers credit, they made a zillion dollars on what amounts to catchy graphics.  They pulled off a modern day Pac-Man and marketed the living hell out of it in similar fashion while the getting was good.  So while I appreciate the success they have earned, I can’t offer the same respect for those who have forked over cash for t-shirts and stuffed dolls. 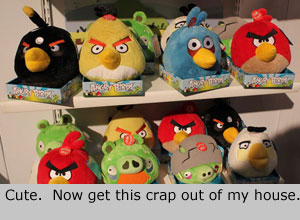 As seen by popular groups such as One Direction!!!  Sorry, but until I saw this sad excuse for a unitard, I had no idea what a Onesie was or that One Direction existed.  But who cares!  Someone more famous than you is wearing it and despite the fact it looks freaking ridiculous ( not to mention difficult to go and have a pee with ), you simply have to buy it.  Wait, you bought one?  Get your filthy eyes off my site!!! 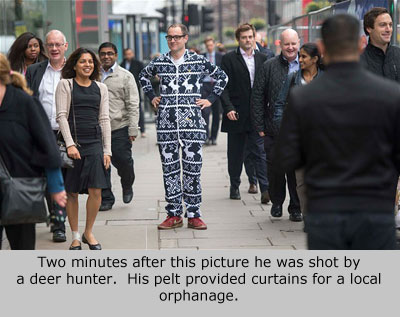 There’s only a few excuses to wear a Onesie: If you’ve a super powered alien from Krypton, a billionaire vigilante, or just beamed down from the Starship Enterprise.  Barring that put on your damn pants, buy a nice belt and stop being such a blasted pushover for mass marketed fashion.

Stop.  Will all you parents just stop.  Think for a nanosecond what you’re doing to your little girl.  Forever they will be convinced they should live the high maintenance life of fancy cars, own sugar-Daddy boyfriends named Ken, and possess impossible figures.  All without the reassuring comfort of being secure with their anatomically correct genetalia. 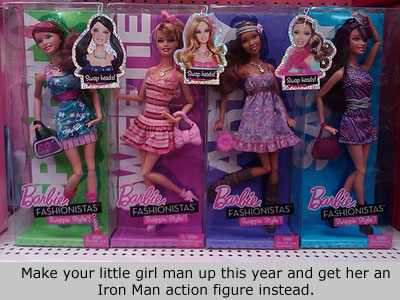 Before I get labelled as sexist again ( look, all I said was that women wash dishes better than men.  Is that a crime? ), I understand that the boys like their toys too.  It’s just that ours have a point.  While Barbie is sitting on her lazy gold-digging white ass, action figures like GI Joe are saving the planet from inept terrorist organizations.  Even the drunkiest of the drunken action figures, Tony Stark, has enough time to put his womanizing ways on hold to don a cyber suit and save the day.  So don’t even compare the two!! 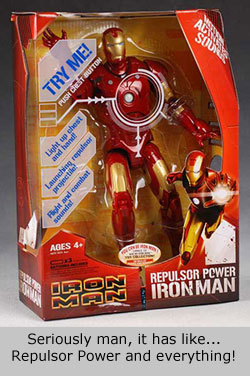 A saturated market of posters and toys of young men catering to the Elementary school-girl demographic make One Direction more vile than last years dried fruitcase.  It’s like someone took New Kids on the Block and Jonas Brothers and put them into a human sausage grinder.  And as cool as that sounds the result is anything but.  Instead you get yet another group of five boys hand selected by music corporations to sell love ballads to little girls.  Doctor Doom was never so diabolical. 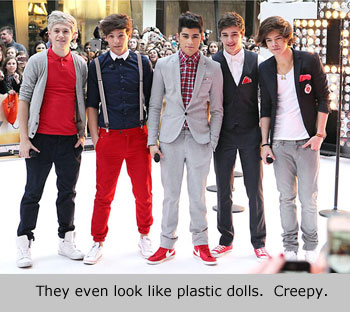 While I don’t begrudge these guys for their success, it really lifts my butt off the can when people compare them and their flash-in-the-pan-ilk to the popularity of the Beatles for example.  The Beatles affected a generation.  This steady churn of boy-bands go out of style the second their audience is old enough to buy tampons.

So do your little girl a favor.  Delete her entire iTunes collection.  Trust me, she’ll love you with all her heart for your loving gesture of care for her well being, and you will truly have a Christmas you will never forget!