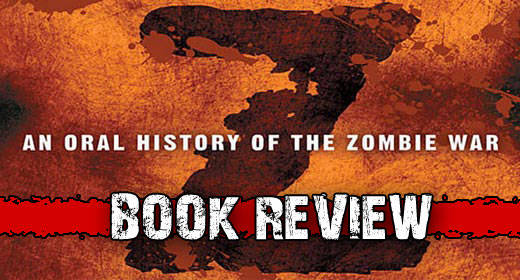 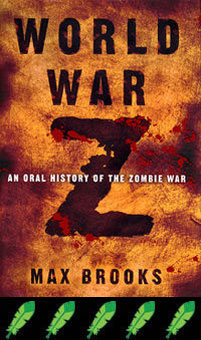 Some think I enjoy zombie literature out of entertainment.  Those people are fools.  I am rather preparing myself for the inevitable feeding frenzy of the zombie apocalypse.   Yet while I await the shuffling masses of the undead, Max Brooks provides a refreshingly new style to zombie fiction.

In the follow up to his Zombie Survival Guide, Max Brooks has compiled a brilliant novel based upon the foundation of his previous book.  In it Brooks plays the role of a United Nations PostWar Commissioner who interviews people involved in the great Zombie War.  In that sense, this book looks back on past events but relives them in real-time as the stories are told by the survivors ( a Chinese submarine being attacked by clawing underwater zombies totally rocks! ).

What makes World War Z so blasted entertaining to read is the multitude of short stories that all resonate with the common plot.  Each story is an interview from a new character(s) all over the globe and every story touches on the consequences of the outbreak on such things as religious, environmental, and political views.  It’s far, far more a study into the psyche of the living and not in any way a simple “zombie chases girl through the woods” story.  In doing so Brooks exposes just how fragile society is…and corrupt.  The devastation was as much a result of corporate greed and deception, political infighting, and outright denial than it is the roaming dead.

WWZ is easy reading because you can read a chapter, get a story, and then the next day do the same.  So if you happen to have a short attention span this will certainly cater to your situation.  Or in my case, having a household of needy children who bother me with such trivial request like, “I’m hungry”, “I’m thirsty”, or “Kammy’s caught in the gears of the treadmill again”.  Nag nag nag. 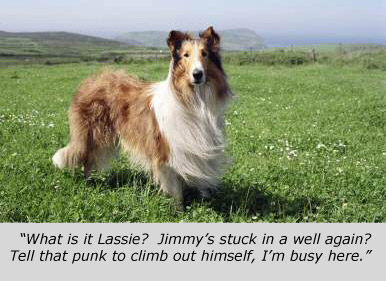 So is Max trying to send a message with WWZ?  Clearly, yes…and it is a relevant message that we would rather be comfortable in denial than have to take any responsibility for action.  As such, the groping, gnarled reach of this book extends far beyond what would otherwise be a simple premise.  And with all due respect to George Romero, I think Max Brooks is doing a far more competent job at getting his message across as old George should probably just stop making zombie fiction entirely because it well, kind of sucks lately.

By the end the book the fire of the zombie apocalypse has been relatively contained, but there are still brush fires being put out across the globe.  Some places are still under complete undead control.  I imagine that’s the need for the Zombie Survival Guide…to be equipped to pick off the legions of the damned who may still be out there!

WWZ is good, filthy fun and Max Brooks breathes life into the decaying corpse of the zombie genre that has had more ups and downs than Apple stock.  The audio book ( which I may get if Jean ever pays me with an iTunes card for fixing his PC…and I hope you see this you cheap son of a bitch ) may be a temping buy as it has voices from Alan Alda and Mark Hamill and has even won an Audie Award in 2007.  Tempting indeed!

I gladly give this a 5 Feather rating for originality, a relevant message, and a book that can be easily picked up for a fresh story each time.

UPDATE:  MOVIE STUNK.  But we all knew it would didn’t we?