When I packed up my bags as a young man and went to Bible college, I was ready to begin studying my newfound faith.   But as a young Padawan, the Jedi council informed me very early on that Pre-Tribulationism was just the best scenario out there.  I was totally cool with that as I had no reason not to be.  Beam me up? Why not…where do I sign?

But as I grew in my studies, the supposed scriptural support for pre-trib theology wasn’t materializing.

To compensate for this lack of proof, Pre-tribulationism has resorted to an all-out Christian advertisement campaign that is getting, in my opinion, totally out of hand.  Video’s “left behind” for your family explaining the sudden appearance of empty laundry and my personal favorite…pet services to pick up little fluffy after the rapture event.  Yeah, like anyone is going to honestly care about your stupid cat or dog AFTER you’re gone!

After much study in the area of eschatology, I am convinced that the scriptural support for pre-tribulationism is at best, creative interpretation.

Most pre-tribber’s will admit Christ describes the “rapture-event” in Matthew 24:31.  Revelation 14:15-16 places this event almost verbatim significantly into the pre-tribulation timeframe.

Then we have the destination problem.  Pre-Tribulationism states we will meet the Lord in the air and reside forever in heaven.  Problem is, he’s not on his way to heaven…he’s on his way to Jerusalem.  And it would seem we are too.  That is of course, unless we just plan on waving at each other as we pass by.

These are only the tip of the iceberg for arguments against this popular theory.  So why the rabid adherence to this escapist theology

Probably 90% of the reason is that we give 90% of our eschatological Bible study thinking over to big names like Tim LaHaye and the like.  Now let’s be clear…these are good men and this is not a salvation issue.  They have good things to say and I do not question their hearts or motives. 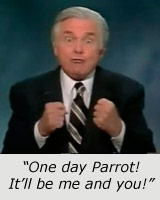 We need to step back and realize that although Pre-Trib may be the most popular view…it is also the most unlikely to happen based on the scriptural evidence.   It’s a snowball effect.  And now we have most of North American Christians making rapture preparations. ie: doing nothing. This in my opinion, is leaving us totally unprepared for whatever comes down the road.

Now I’m not endorsing stocking up on beans and ammo.  Not unless you like shooting guns all the time while having explosive flatulence.  In that case load up.  But neither do I advocate doing nothing but playing “Left Behind-The Video Game”.

Sure, I hold a pre-wrath”ish” view, but I’m also open to the idea that I’m completely full of crap when it comes to my particular views on this subject.  I’m not going to tell you that this is CORE doctrine because it shouldn’t be.  It’s a mystery that we all are doing our best to solve to the best of our ability.  This is not salvation, and should NEVER be put on the same level.

Yet we need to open ourselves to the idea that pre-tribulationism, despite it’s Christian pop-culture popularity, is almost certainly not even close to the real deal.

Chapter 52: Too Many Roosters

Chapter 3: You’re In the Army Now