The internet is all abuzz with the latest Beachbody workout, Les Mills Combat and reviews out there seem generally positive.  However, until I have anything to say all that talk is just chatter from the unwashed masses who will forever sit at the feet of the Dysfunctional Parrot.   Friends, if its one thing you can count on from the DP it is brutal honesty.  That and inappropriate gas during family get togethers.

WHAT YOU GET:
Program Guide, calendar, food guide, a tape ruler which the kids will destroy in seconds, and 5 DVD’s containing a total of 11 workouts and 1 orientation video ( which I will skip over ).  Your lead instructors will be Dan Cohen and Rach Newsham, two exceedingly happy yet fit New Zealanders.

First thing you’ll notice is the happy people.  Say hello to them. 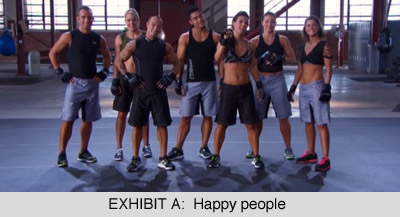 Secondly, you will also notice immediately that this is not RushFit.  It’s dance martial arts cardio.  In other words, TaeBo with better production values and thankfully no blinding color co-ordination.  For that at least I’m thankful. The music also has heavy vocals which really threw me off and more than once had me wishing it would just go away, but it won’t because unlike other Beachbody DVD’s the option is not there.  And it also seems Rach likes to occasionally sing.  Well…ok then.  OK, I’ll try and be positive.  This is a very good cardio routine but no harder than any other martial arts style cardio workout.

I’ve taken karate for fifteen years and I know kata.  But I’ve never done a kata to “Walking in Memphis”. 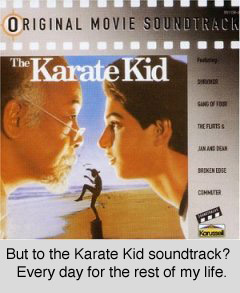 This one will burn you but good, giving you the added benefit of having your own personal musical montage and as such you should be able to defeat the Kobra Kai in the All Valley Karate Championship when it’s done.  Another advantage is…Holy Mackerel is Dan singing???? 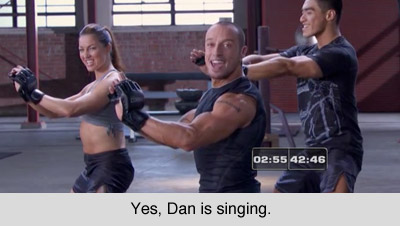 Kata has a way of making every move count, so I give it high marks for that.  It also wears out Dan and Rach and by the end they’re thankfully knocking off the goofy antics.  And the singing.  But tomorrow is another day.

The cast is oiled up and ready to put on the show.  This is an hour long musical montage of kicks, punches and uppercuts while jumping about to the beat.  And because of that you will spend 90% of your time trying to remain in step with the music.  Either you will like that or find it annoying.  But then again, that’s just the nature of this workout program and if it drives you nuts you probably wouldn’t have made it this far.

Occasionally the other cast members speak words of encouragement and hey…is that a purple skunk streak in Rach’s hair?  Was that always there?

Dan takes the lead here as you get into total body circuit training drills that kick your ass.  No kidding, the use of weights makes this knock out anything P90X or Insanity has to offer and I don’t say that lightly.  The trainers even cut back their manufactured excitement and seem uncharacteristically authentic as I imagine singing and dancing is hard to do when you’re on your final set.  The only downside is that this is only 30 minutes long.  But wow…what a thirty minutes.  This is like Asylum- Strength in terms of the cardio weight aspect, but I think even Shaun T would be out of gas after this.

After a good 4 minute warmup it’s off to the races with Rach taking the lead.  As with any plyo progam you will endure squats, jumps and burpees.  Many sequences are repeated several times such as the Plyo-Lunge/run/powerclimb…all done to the beat of the music.  There is supposed to be weights involved, but it only gets used for one move in the whole thirty minutes.  Probably just as well as this is pretty quick and intense as it stands.  The upside is that it is high intensity, but low impact which means your knees won’t start to kill you as if you just did an Insanity workout for the tenth day in a row.

Happy Dan is full of jumping beans and ready to rock.  Don’t chuckle too hard though as he is going to royally give you a beat-down today.

UBB is pushups, presses, rows, weighted uppercuts and press squats that combine together for a truly exhausting cardio circuit that feels like it was straight from Shaun T’s kitchen.  A word of advice, watch it with the squat speed shoulder press…I clocked myself in the nuts with a 25 pound weight.  I then proceeded to spend the next 20 minutes praying for the sweet release of death.

It may be only just over 20 minutes, but you won’t be able to do a single push up after it’s…wait…is that a remix of The Final Countdown by Europe?? 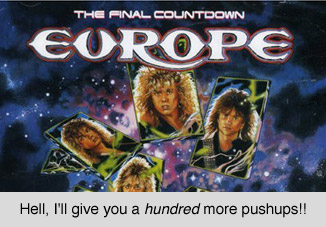 Rach leads the workout in what is really another cardio routine with a martial arts flavor.  That means kicks, squats and some plyo…but mainly kicks.  That means if you ever find yourself in a bar surrounded by ninjas, you’ll be good as gold so long as a funky beat is playing on the speakers.

This is a good one that in my opinion does more to work out the glutes than anything and helps develop flexibility as you try and kick higher each time.  In fact, I was shocked how bad my kicks had gotten over the years.  So if you’re looking for the perfect side kick to break your opponents femur and then dance over his broken body then this is thirty minutes well spent.

You guessed it, it’s an abdominal workout.  But be warned, this one is probably tougher than Ab Ripper X.  The occasional use of a weight will see to that.  In every sense of the the word, this lives up to its name.

There is also a strong emphasis on strengthening the lower back and that makes this a true winner in my book.  Either the music is better than usual here of I’m warming up the this programs style of music…right down to doing some crunches to a James Brown-ish remake of War.  What’s it good for any way? 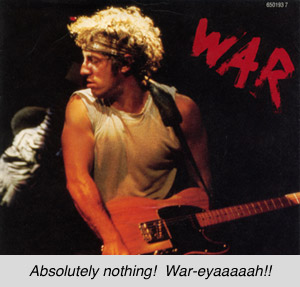 It’s a lot of slow moving blocks that are done while holding a stance. It ends with a few minutes of old-school stretching, but contrary to the name this doesn’t really stretch you out that long or that effectively. It feels more “Tai Chi”-ish in contrast to the fast moving rhythm of the main workouts. Just keep in mind this won’t in any way replace a good yoga or stretch session.

I do appreciate the good form of the cast, as clearly they have indeed taken some decent karate training ( not sloppy TaeKwonDo McDojo stuff ). Their blocks are sharp and deliberate and their stances long and strong.

Times: 30 and 60 minutes respectively.    Trainer: Both Dan and Rach

Going live is tricky business.  Like when you go to a U2 360 concert and The Edge plays “Streets With No Name” in drop D tuning.  Interesting, but it’s…NO!!!…that’s just not how it goes!! 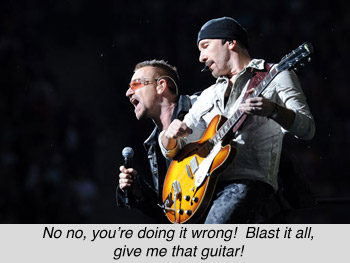 I’ll review both LIVE from Bristol, UK workouts at the same time because they’re essentially just stage versions of their counterparts except now you’re working out with hundreds of sweaty strangers.  They’re really just repeat workouts so I suppose they’re here to add variety in what you see, but not really in what you do.  Hard to say how many times you’d want to work out to this kind of video before it got a little old.  Personally I always find things like this sort of awkward.  Like when someone in the adjacent urinal comments that I have a nice watch. 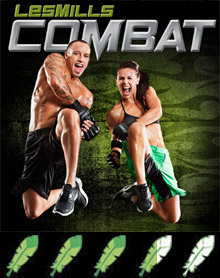 The big push with Les Mills workouts seems to be the music soundtracks.  It’s techno pop with lyrics.  Between you and me the music took a long time to ease into as I honestly feel good music died in the 70’s ( when people could play more than 3 chords ) and that techno is the essence of uninspired computer generated junk.  But that might just be me being an old fart.

The skill of the instructors is never in question.  They obviously have a solid background in martial arts and bring that skill to you in a very unique fashion that will absolutely work you in very creative ways.  The main way they do this of course is with music.

Being a cup-half-empty kind of guy that I am, I also must speak of some bad news.  Unlike other Beachbody workouts, the option to kill the music is not there.  Turn it down yes…but not off.  In a way that makes sense as having co-ordination with the music is just about inseparable from the actual workout itself.  Without it your rhythm with the cast will seem extremely random.

What about the instructors?  Don and Rach will either motivate you or irritate the ever-loving Hell out of you.  Let me elaborate:  Does Tony Horton not sit with you?  Then put your credit card right back in your wallet because although Tony can be a little well, Tony…he is nonetheless authentic.  To many Dan and Rach might come off as displaying phony, manufactured energy and humor.

That’s not to completely write this off.  As a martial arts cardio package this will work you to the extreme, it just might take a little getting used to for most people.  If you’re under 25 and therefore have had all musical taste genetically removed from your DNA and think autotune hacks like Beyonce are actually legitimate musicians, then this might be the cardio-ticket you’ve been waiting for.