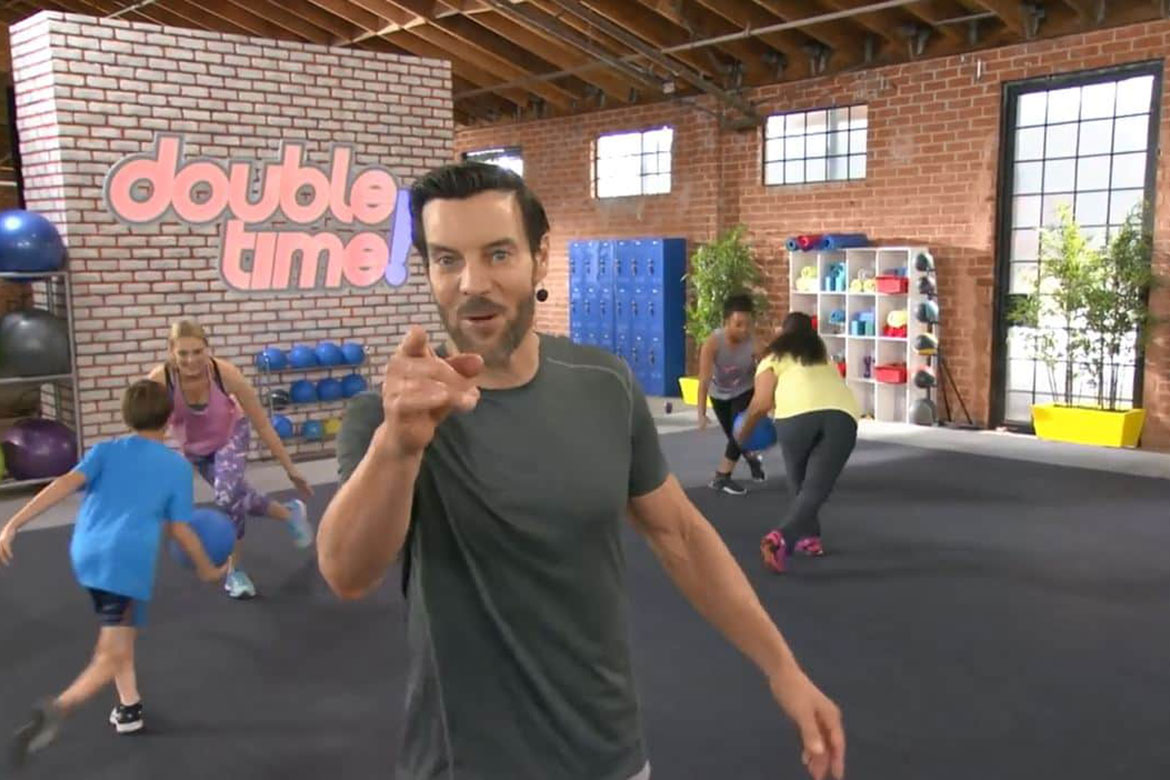 These days it seems family fitness is all but a forgotten enterprise.  Sure, we dad’s often fall back on such time honored traditions as chasing the kids with power tools, but even that is being eclipsed by Nintendo, X-Box or whatever thumb-trainer is sucking the life-force from the youngsters.  Honestly, I haven’t a clue.

Enter once again Tony Horton of P90X fame to bring a week long program, DOUBLE TIME to get little Jimmy and Jane off their obese rears and transform their junior-fat-rolls into lean muscular power.  Barring that at least you can tire the little brats out for an early bedtime so you and the spouse have more time to get freaky.

To share in my review I have drafted my 4 kids…who under threat of no supper for a week and giving all their possessions away to Goodwill, will give their insights.  Rather than use their real names, they will be referred to by their call-signs.  Allow me to introduce my crew:

Catchphrase: “If I watch this, can we go shooting coyotes this weekend?”

Catchphrase: “Let me get this straight, people actually want to read your opinions?”

Codename: TRIX ( hey, she’s a kid and liked the rabbit )

Catchphrase: “I’ll do this if I get a second cookie.”

A couple soft yoga mats would be required for ground work.  The main equipment though is just a regular ball.  Soccer or basketball would be perfect.  Avoid medicine balls unless the kid has been an insufferable twit all day and needs to be reminded who the alpha-buck is.

The workout almost exclusively uses a ball as a means of trading off the work.  For example, one will so sit ups with the ball while another mountain climbers.   Shuffles, passes and low impact jumping make this a primarily cardio workout.  It’s an easy introduction into the program.  Agent Special K felt the pace was just right and thought Tony was a funny guy to train with.

There’s more of a strength workout at play here with planks, squats and crunches.  The ball is there of course to keep engagement between workout partners.  Agent TRIX felt the moves were just hard enough to be challenging without causing frustration.  It helps that Dad is a bit of a nut too.

Cardio by means of passing the ball.  Jump passes, lunge passes, twist passes…you get the idea.  It’s definitely low impact and low intensity, so don’t expect a Max 30-level but kicking.  Captain Crunch liked the cardio, but probably would have preferred a workout that used resistance more.

Lunge, squat and crawls.  I re-enlisted Captain Crunch for a second round as this one looked to have more resistance.  I think he liked it a lot more, especially when partners push against each other with ball lunges.  Seeing as this kid is already 6’1″, we were pretty well matched for strength which means either I have to train more or cut his feed ration.

Agent Trix signed up for this one based on the name.  I had some concerns that the speed and complexity might be too much for a 9 year-old girl but you’d be surprised how much a kid can enhance their performance after a bowl of Frosted Coated Sugar Bombs.

Lots of fancy footwork will keep you both on your toes.  I was surprised how much this one was making me work so hats of to Tony for finding a way to make it challenging across the board.  Side skips, planks, running, jumps…I think Agent Trix was having more fun watching Dad try to keep up.

This is another routine focused on resistance and this time Agent Special K is back to show just how much internal rage a 12 year-old girl can possess.  Here’s a hint: it’s quite a lot.

While there is some arm work, it really focuses more on legs and core.  The parts where you push against each other using a ball is always fun, especially when your kid knows they have to give it their all.

This one had Agent Sugarbear written all over it.  It’s recess after all!  While this is primarily stretching, there is a little core work to keep it interesting by throwing in moves like Superman/Side Bananas and some balance postures.

Gut-buster time.  I enlisted Agent Sugarbear due to the short running time, and because 8 years old is not too early to shoot for a steel core.  This is an easily adaptable ab workout that is all spent on the back.  The last move, Tour de Floor makes each partner push against the others feet.  Thus, gauge your push-back accordingly.

Tony Horton is probably the only natural choice for a program like this.  I’m trying to think of any other Beachbody trainer that would work but am coming up with limited candidates.  Thus far I’m having comical visions of Sagi yelling “beast up!” at a ten-year-old pinned under a bench-press or a frazzle-haired Autumn surrounded by kids running amok.

Double Time is a great way to introduce kids to the concept of putting fitness into a regular schedule, and doing so in a fun way.  It also has the added benefit of requiring pretty much just a ball to get going.  So what do the kids say?  A post-workout briefing decided on a 4 Feathers out of 5.  The younger ones liked it more while Captain Crunch wanted to have some weights involved, yet still thought highly of it.   This is a grade based on how it appeals to kids so don’t think the number reflects overall difficulty.

A great way to spend a week getting the kids to do something besides work out the thumbs. Based on my own test group, the program scored well with the 6 to 15 year old range.