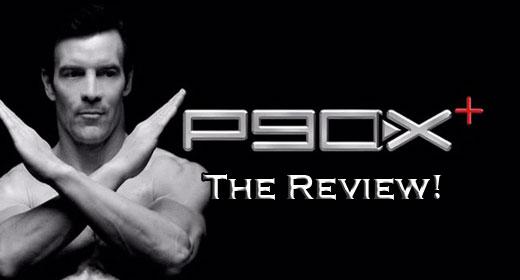 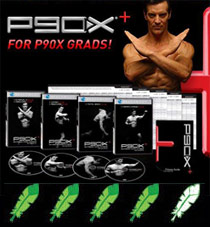 P90X+ is for lack of a better term, an expansion pack for the highly acclaimed fitness video series P90X.  In many ways it is similar, but in almost every way that matters it is a separate beast entirely.

The original P90X was a well laid out schedule of workouts that concentrated on a very specific purpose on any given day.  P90X+ can be somewhat confusing as it can be difficult in knowing how or where to fit them into the P90X schedule.   I argue that may not be as daunting as we’ve been led to believe.  P90X+ is probably best thought of as a recovery week set of DVD’s or to be used the week after your recovery week and not necessarily meant to be replacements for an existing P90X workout.

The stars of the show are Tracy Morrow and Mark Briggs.  They are both very likable people even though they really don’t say much.  Like all of Tony’s video’s they are there to work hard and sweat, not smile like mannequins. 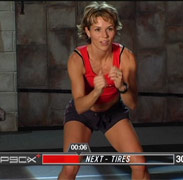 Tracy is a mother of six and like Tony I’m convinced she gave birth to them from her biceps given her excellent shape!  I appreciate the use of real people like her who really work out, not some nineteen year old cardio bunny from Ming’s School of Discount Actors.

Mark is a police officer who has harder abs than RoboCop.  He stands like a mountain and is a ripped specimen of fitness.  In every video he brings his A-game.  He demonstrates using the bands in the weight videos and shows how they can be utilized in powerful ways.

Tony Horton is of course, the ring-leader.  He’s found his niche from his experience after P90X and comes off as very easy going and relaxed.  This has a lot to do with the extreme lack of downtime in these videos.  They move fast from one move to another resulting in high cardio even in the midst of a weight workout so there’s not a lot of time for jokes!

The 5 workouts are best discussed in some detail:

1.  TOTAL BODY + ( 45 min ) :  This is the monster in the batch.  Like the name implies, it’s a total body workout that will make use of the pull-up bar, weights, and push-up stands.  I have to recommend Tony’s Power Stands simply on the basis of their height.  Dips and Hindu Pike Presses are near impossible with other brands.  Think of this as a circuit training workout as it goes from move to move very quickly, especially the 3&3’s or 1&1’s which are similar to a Navy Seal training routine.  Total Body Plus can be a great substitute for Core Synergistics.

2.  UPPER BODY + :  Chest, Shoulders, Triceps and Biceps.   It’s a blaster and one of my favorites when I want to pay attention to my upper body strength.  Especially during a week that I do a lot of cardio and my legs are too trashed for Total Body+.

3.  INTERVALS + ( 41 minutes ):  Despite accusations that P90X has less intense cardio than Shaun T’s Insanity, this proves otherwise for at least this one DVD.   The proof was in my heart rate monitor.  The idea of intervals is to do each move slow, medium, then full bore.

4.  KENPO + :  It’s no secret that Tony wanted a redo of the original Kenpo Cardio.  This is it.  Harder moves, less downtime, and a better overall feel.  I spent about ten years in karate and wish I had something like this is use at home to help out my cardio.  For those who like Billy Blanks, this is a far superior alternative because you won’t need to tolerate harsh colors, smiling choreography and crummy music.  Then you should get lobotomized for liking BB Tae Bo!

5.  ABS CORE + ( 20 minutes ) :  Here’s something a little different!  Is Ab Ripper X starting to get stale?  Try this on for size as you will utilize the pull-up bar for serious ab work and spend time on core balance to boot.  The last move says it all…Cherry Bomb.  Blam!

P90X+ if used properly can be an invaluable part of your muscle confusion arsenal.  The program might have done well to consider an additional Yoga + DVD to satisfy the P90X masses who were never that crazy about the length of the original 90 minute yoga.  There is heavy use of BowFlex Select-Tech dumb-bells for what is obvious product placement by virtue of the infomercial at the end of the DVD’s.  I’m not a big fan of the Select-Tech, but that’s no strike against P90X+, just me voicing an opinion on equipment.  The videos also make use of the actual P90X Pull-Up bar which is at least more accessible to the average home gym owner.

Like P90X the music is there but not in your face.  It flows perfectly with the workout but was obviously put in after the fact so you have the option to turn it off.  The set is rustic and dark toned so it will remain in style for much longer than a regular workout video.

With the upcoming P90X: MC2 arriving late in 2011, there stands a good chance that the + might get lost in the shuffle.  This would be a tremendous crime against fitness because this series is an absolute winner at muscle confusion and should absolutely be in the collection of any P90X fan. 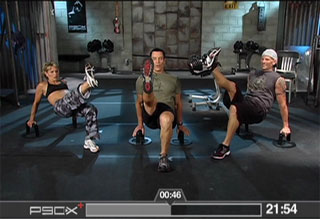