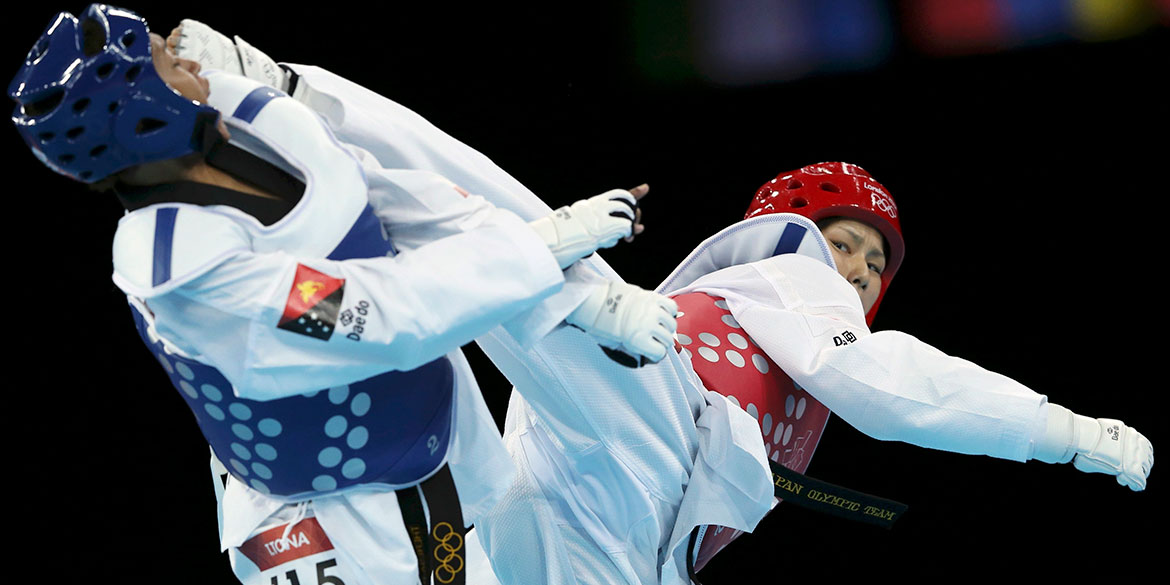 Before anyone freaks out…again…about this article, know that I only hurt the ones I love.  I never regret taking TKD, but I also have no fun poking fun at it.  Please accept this in the spirit that was intended.  Thank you.

Some time ago I wrote an article called 5 Reasons Karate is Useless and since then the martial arts world has never been the same.  For starters, it united in a single monolithic force to inform me what a complete traitor I was.  And for months on end they came at me like a stubborn Plantar Wart attempting to defend their honor or some weird crap like that by throwing an endless volley of MMA artists who apparently rubbed up against a karate dojo once.

However, since my soul is fueled by the rage of others I thought it wise to explain why another martial art I am also very much familiar with, TaeKwondo, is also just as useless.  In fact, TaeKwondo is so dreadful it makes karate look like magic.

Let’s make a distinction right now.  For the purposes of this article I’m talking about WTF TaeKwonDo ( World TaeKwodo Federation ) since that is my experience.  While ITF ( International TKD Federation ) is also useless, it is a much more respectable style in contrast.  However, you could also go all the way and discuss the ATA ( American TaeKwondo Association ) which is the poster child for McDojo’s.  So if it sounds like I’m being too harsh on any WTF readers, relax.  At least you’re not ATA, but I digress.

To say TaeKwondo is somewhat random in its delivery is an understatement.  There is almost universally no foundation taught because that stuff is repetitious, boring and tends to send the little moneybags away.  Nope, it’s just wild haymakers.  That’s why the day you begin sparring is also the day to you purchase expensive padding which is intended to insulate you somewhat from the inept flailing of your fellow students.

Once I had a sparing match where I got nailed fairly hard by a black belt in what was either an act of incompetence or an attempt at teaching me “discipline”.  A black belt is expected to have control, especially when dealing with junior belts.  He however was unaware that I had 15 years of karate in my resume and as such when the ref gave the green light to continue I decided to give a Shotokan style ass-whoopping to the “black belt” and see if he could take what he liked dishing out.  Where I came from, that sort of lack of control was met with an equal amount of “incentive” to get your shit together, asap.  Suffice to say, we weren’t really on speaking terms for a few weeks after that.

So let that be a lesson to all TKD black belts with inflated ego’s.  Don’t piss off a junior belt that has spent any time in another fighting art unless you want to discover just how low TKD is on the martial arts food chain.

Few things in life lack the low quality of TaeKwondo uniforms other than perhaps Chinese made guitars.  They are thin, polyester, and generally riddled with ad placements from Adidas,  club logos, badges, and other tacky garbage.

By the time you’re done taking the special “Black Belt” classes, or the “Delta Force” badge or whatever else they offer, you’ll look more dolled up than a Vegas prostitute.  If you take nothing else from this article, please…please just remove these hideous iron-ons from your already hideous uniform.

Truth is that most martial arts uniforms in general are sort of useless when you get right down to it but they give a sense of decorum and people like that.  Judo, Aikido, and karate for example all have heavier weight cotton uniforms that don’t stick to your body like warm spaghetti and are at least made to give a good “snap” noise when a punch or kick is thrown.  Performing kata in a Tokaido is almost sex.  The same move in a poly-TKD uniform will have all the acoustic impressiveness of a mosquito fart.

When your Dojang is over 70% populated by children, you probably should take a serious look at your “martial art”.  When a fair number of those children are “black belts”, well…that’s just bullshit.

Hey, I’m a parent.  And as such we usually want the path of least resistance for our children’s success at a young age as not to prematurely burden them with the crushing disappointment that is adulthood.  That’s why we don’t put our kids in Krav Maga classes taught by hardass Israeli ex-paratroopers.  We want kindly looking, happy Sensei’s who are more than happy to give our kids colored belts in exchange for copious amounts of cash.

Let’s be honest, TKD clubs are great daycare centers.  Any club that advertises a “Junior Dragons” group should be seen as the perfect place to drop the kids off…but not the perfect place to learn how to actually fight.  Don’t get me wrong, TKD can teach kids how to get along and all that wonderful social crap so in that sense it is actually not useless.  Just don’t expect little Timmy to become a killing machine, and certainly don’t expect that belt to be worth anything more than the cheap cloth it is made out of.

Want to know how to defeat a TaeKwonDo practitioner?  Simple.  Punch him in the face.  Preferably with your fists.

No joke.  TKD is all about throwing those haymakers with the feet.  The hands are just there for, I dunno…balance or something.  In fact I drove sparring partners nuts by doing a little trick I picked up from karate called blocking.  Allow me to elaborate with an actual dialogue during practice sparring:

BlackBelt:  “What was that”

I think you see what I’m getting at.  To prove my point, watch Olympic TKD and try to spot a punch.  You’ll have a better chance of spotting BigFoot judging the match.  But I guess the positive side is that TKD is the perfect martial art for amputees.

Let’s be up front…not all black belts are created equal.  Some take a couple years and some take even more.  The most respectable training facilities don’t offer belts at all.

I’ve already mentioned how the value of a TaeKwondo belt is dubious at best given that it only takes a couple years and that they are universally handed out to children in the WTF for the sake of parents posting a “my kid is better than your kid” picture on their Facebook page.  But lets break down the actual cost of that black piece of fabric shall we?

After tests for a gazillion belts, equipment, required tournaments, other “fees” and an expected 2 year time frame ( standard McDojo black belt time ), it came to $5000.

If you’re not mentally dropping more colorful metaphors than Beverly Hills Cop 1 AND 2, then you need to rethink your emotional investment in your training.  For that much cash you could fly Tibet and probably get a few quality lessons from a legitimate Shaolin Monk.  Or you could spend a hundred bucks and buy any one of the fitness programs I review and come out further ahead physically.  Your call.