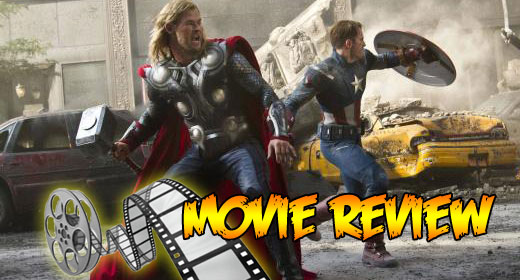 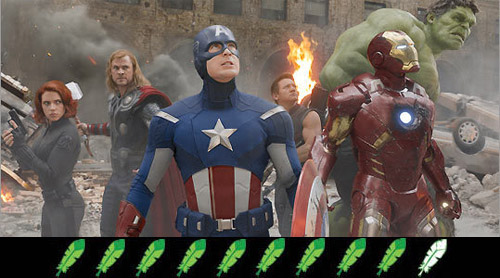 When Loki ( Thor’s half brother ) decides to trash the planet, it’s up to Earth’s Mightiest Heroes to save the day.  Captain America, Thor, Iron Man, Black Widow, Nick Fury, the Hulk…and that “Other Guy” deliver the goods in the first real mega-hit of the summer ( up yours Hunger Games! ).  OK, to be fair even Hawkeye rules in this.  Can you believe that?  Even friggin’ HAWKEYE!! 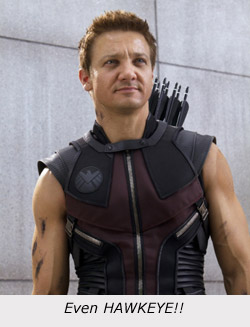 Every actor in this movie is clearly having the time of their lives playing their roles, right from Samuel “MF” Jackson to the absolutely amazing villainy of Tom Hiddleston as Loki.  Robert Downey Jr. is the kind of actor who could do nothing but read the phone book for 90 minutes and still keep an audience of the edge of their seats.  As Tony Stark/Iron Man he’s serious, funny, tortured, and all at the right time in the right amount.   Chris Evans pulls off Captain America despite having to wear the cheesiest uniform of the bunch.  And Chris Hemsworth as Thor plays the role so naturally that the story never suffers from the logic of having a Norse God as a member of the team. 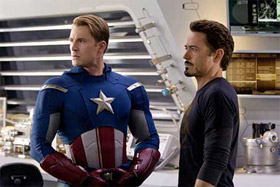 What also amazed me was Scarlet Johansen.  Sure, she’s there so we can look at her backside in tight black leather.  That’s a given.   But her character, Black Widow is explored and surprisingly complex.  Yet thankfully, she’s not reduced to being anyone’s love interest nor being a dumb sack of uselessness like Megan Fox.  In fact, the default “love interest” sub-plot is not in this movie at all.  Good thing because it wouldn’t have worked due to not being enough time for it, despite the movie being 2.5 hours long.

The best part about this movie for me isn’t even the effects.   It’s the interaction between the characters.  Can you freaking believe that??    Actual character development takes place in a movie that takes advantage of each actors unique gifts and not just repeating the lines on a script.  The last time that happened in a sci-fi movie was The Empire Strikes Back.

Oh yes, the action.  Unlike Bay’s Transformers, Avengers is not a total clusterf— of convoluted CGI.  You can actually make out what the heck is happening when it comes down to fist-o-cuffs.  And wow…do things ever go boom.

Marvel’s Avengers is ten pounds of awesome in a five pound bucket.  It manages to be faithful to the source material without miraculously becoming a steaming pile of sun-rotten blue cheese.    Throughout the movie I was constantly telling myself, “Wow…this is good.  This is actually really, really good.  HOW IS THAT POSSIBLE???”.  So do yourself a favor and see this in theatres because this much super-concentrated action demands the big screen.