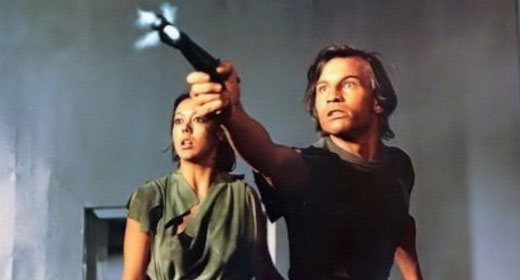 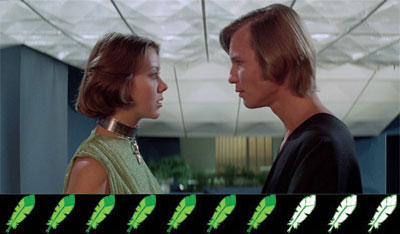 Logan’s Run 1976: For the Christian audience, Logan’s Run is a “what-if” adventure that is a good demonstration of the logical outcome of an unrestrained Hedonistic society. The movie is based on the book by the same title, but like most adaptations it strays from the source material rather far.   But no matter, as it attempts to make up for this with a relatively deep message, and well…a significant amount of hooters.

The setting is a future society in a sealed off city where the occupants are all under 30. That’s because when you hit 30, you attend an event called Carousel where you bite the eternal banana in a Colosseum by which participants float and get shot by a laser beam. Those who are too chicken to commit this entertaining form of suicide are called Runners, and they are hunted down by the policemen of the city called Sandmen. 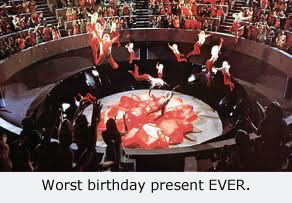 Logan 5 ( Michael York ) is a Sandman who rather enjoys his work. In fact, when he hunts down a runner he spends time playing cat and mouse with him, enjoying the moment. So right away its obvious that this guy is going to be a hard convert!

Runners hope that they can find “Sanctuary”, as many have been able to get away but nobody knows to where. It’s like running from the IRS and hoping to find a tropical island to live out the rest of your days. In the hope of finding Sanctuary, the city computer drafts Logan to go undercover as a runner by screwing with his own timeclock…a glowing gem in their hand. Logan becomes somewhat annoyed, as the computer dodges any question about whether this process can be reversed. 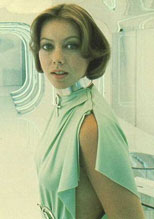 Logan suspects Jessica 6 ( Jenny Agutter ) is planning to run when her time comes. Therefore he tries to gain her trust.  Jessica is easy on the eyes even by todays fashion standards, so don’t worry having to endure that laughable 60’s “Go-Go Girl” crap.  The two make their way to try and find the way out of the city, all the while pursued by Logan’s best friend Francis ( Richard Jordan )who has no idea of Logan’s mission and thinks he truly is trying to run.

The acting is pretty good, but there’s a couple scenes that could benefit from the Justin Timberlake School of Acting. There’s a scene with Farah Fawcett that is painfully forced.  She’s there for the cute smile and not a heck of a lot more.  Personally I never found her overly hot, but it may have a lot to do with that explosive hair.   It’s like she broke into Twisted Sister’s hairspray stash and couldn’t stop.

On their way out they find the runners.  Sort of.  They’re dead and frozen at the hands of BOX. BOX is what would happen if C3P0, some old boxes and a pound of aluminum foil collided with the psychological profile of a box of rabid gophers.  Hey, it was 1976 and special effects didn’t come cheap.

Eventually the two escape only to freak out about the outside world which is abandoned. Sanctuary wasn’t what they expected. Kind of like Euro-Disney. But they finally find one lone old man played by Peter Ustinov who seems to be all that remains of the old world. Peter owns every scene and is simply an actors actor.

As they try and get the old man back to the city, there’s one scene that is pure cinematic awesomeness if you pause to think about it. City life is non-stop spring break, promiscous sex and no couple bondings. Even babies are made in a lab. As Logan and Jessica sit by the campfire they unknowingly exchange something similar to wedding vows, ushering back a small part of a lost society. It’s incredibly brilliant storytelling that finally moves the characters from a place of selfish pleasure to caring about the other. It is at this moment they abandon what they knew and choose a better way.

Then ending of Logan’s Run is well, uh…sort of good I guess. It’s one of those situations where a computer gets confused, and then blows up the city. One would expect rather a blue screen or even a good old fashioned kernel panic. It’s like if your iMac crashed opening Firefox, and exploded into shrapnel. But I guess Star Trek consoles even have this problem every damn episode. Stop being so blasted cheap and put in a 5 cent fuse already.

Logan’s Run is must see science fiction for anyone who is a fan of the genre.  The message is that a society that worships youth will eventually grow to fear the ravages of age.  So much so they will eradicate it from their sight.  It also has a positive message at the end that shows how true love and selflessness can only find itself in a husband and wife union.  Due to mature content, this movie would not be suitable for children, nor a Bible study for that matter!  But for those who are able to watch this, Logan’s Run is without a doubt one of the best films to depict a future dystopian society and the consequences within it.