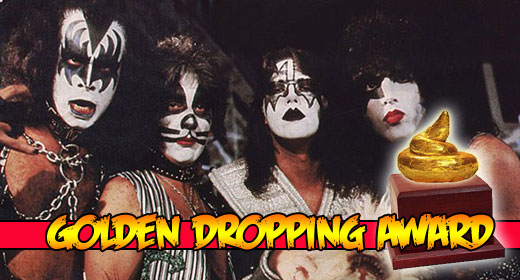 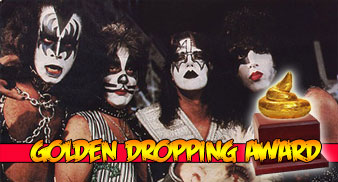 Sometimes YouTube can be a gold mine of classic film.  And sometimes it can be a backed up sewer of utter garbage so hysterical that you cannot keep silent!

Out there…somewhere…is someone who remembers this steaming pile of parrot droppings from the 70’s.  Yes, it’s KISS the heavy metal band in their first ( and thank the Creator, LAST ) made for TV film.  It’s an unholy mix of bad acting, cheap effects and more gnarly chest hair than you’ve ever seen in one film. 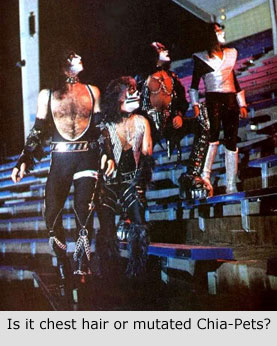 Phantom of the Park was the misguided inspiration of Bill Aucoin who felt this whole rock and roll shtick was going about as far as it could and wanted the band to tap into film revenues too.  I assume that Bill is also long dead, his body dismembered and his bones sold to voodoo necklace makers in Jamaica in the hopes of concentrating bad karma.  To make matters wore, it was made by Hanna Barbera.  Yes, the Yogi Bear and Scooby Doo people.

The film begins with what can only be described as a scene created while under the influence of some pretty low quality 70’s dope.  It also brings in one important part of the story:  The band members have super powers which we later find out have their source in silly plastic molds with led lights. 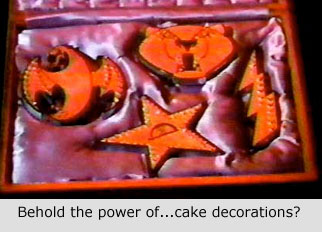 So what’s the story?  Well, uh…there’s this amusement park that has a mad scientist under it who makes robot copies of people and uh…some girl’s boyfriend gets kidnapped and has some kind of mind control done on him, and I guess KISS helps by beating up robot monkeys and eventually their robot copies.  I think.  I guess what I’m saying is that NOTHING in this film makes one iota of sense.  It’s like someone making you watch Plan 9 From Outer Space while punching your cerebral cortex with a brass knuckle.

From a Christian perspective, I have to respectfully object to anyone saying this is demonic.  That suggestion gives this film way, WAY too much credit!  If anything Satan did a face-palm and is still trying to forget the whole thing ever happened.

If you like KISS, this will take every song you like and beat it with an iron bar until you loathe them as you would a thousand Rick Astley’s.   You cannot listen to them again without images of Gene Simmons acting like Rain Man or Peter Criss as Catman who lives up to his persona by being a complete pussy as his awesome “power” is merely jumping.  Or other band members who shoot lasers from the eyes for no reason whatsoever.  It’s no wonder the band has ordered that this movie NEVER be mentioned in their presence.  It is movie-non-grata.   And it is without a doubt one of the biggest sellouts ever witnessed for a popular band.

It comes as no surprise that KISS was given a crash course in acting and failed miserably.  In fact, the bulk of the movie has no scenes with KISS in it at all, just to spare the audience the additional torture of seeing their favorite band reduced to low-budget stooges.  Every line of dialogue can only be described as heinously awful to endure and you feel nothing but embarrassment for each of them as they stumble around in a fog of their own incompetence.

Because of that dearth of talent every single band member comes across as a complete and utter lobotomized hobo who is incapable of wiping themselves properly let alone solving a crime.  Add to that the impossible-to-take-serious fighting scenes and you have the first ever candidate for the Dysfunctional Parrot Golden Dropping Award!  This gets no feathers. I couldn’t live with myself if I gave it any!

DROPPING HIGHLIGHT: The police come to investigate KISS over suspicion of “Demon” ( Simmons ) being involved in a crime. The band is at the pool…in silver robes on high chairs looking like stoned druids. The whole scene is just freaking hilarious. 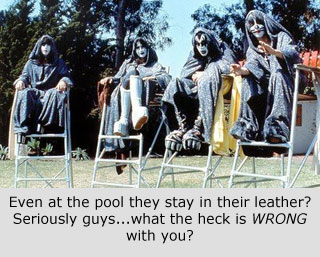 REDEEMING FACTOR: Having problems with your kids being into rock and roll too much? Strap them down and make them watch this film. They’ll be in violin lessons before supper.

WHERE TO FIND: On YouTube as a 14 part video. Or maybe get a backstage pass and ask someone from the band where you could find a copy!

CHRISTIAN COMMENTS: Nothing will inspire you to clean up your music library like this film. I already deleted every KISS song I ever had just so I could feel clean again. I indeed love rock n’ roll…but not like this. Not like this!!