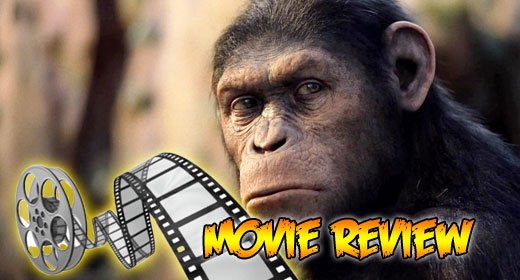 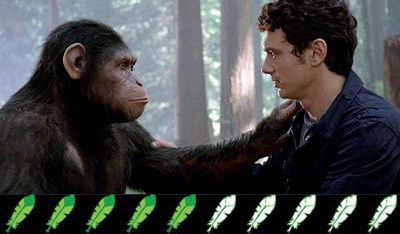 Apes in labs become the flash point for the ape-ocalyspe in the prequel to The Planet of the Apes.  Why a prequel?  Heck if I know.  Thanks to George Lucas and his stillborn Star Wars prequel creations, it seems everyone needs to make one.   It’s like some twisted rite-of-passage for Hollywood directors.  Trust me, there’s one on the way for practically every film ever made.

It all begins when genetic researcher Will Rodman ( James Franco ) is desperate to develop a cure for Alzheimer’s, a disease being suffered by his father played by John Lithgow.  Naturally this is tested on the first damn dirty ape, Caesar’s mother who through a chain of events kicks the bucket.  Her baby, Caesar get’s the genetics passed on to him and thus becomes the big chimp on campus.

There’s much entertaining in this movie.  The CGI is quite flawless as there is actually no use of real apes in the making of this movie.  The problem is that I’ve had a couple cups of coffee and I didn’t sleep well last night.  Therefore yours truly, the Dysfunctional Parrot, would much rather bitch and complain about this movie.  It’s either that or I punch my co-workers.  Aww heck… I can do BOTH!!

For starters, the need to portray certain humans as unredeeming dicks is a tired plot device.  It’s like the Sergeant in Avatar…“Gar!! Going to kill me some aliens and come back to the base for some beer and MEAT!!”.  I guess the whole outcome of this story would be different if the guard only fed Caesar a cookie or two.

Well one thing leads to another and wouldn’t you know it…we have a full scale chimpocalypse.  That’s where it fell off the rails for me. To be honest the whole ending was a cop out.  Why?  Allow me to explain.

When the apes become more self aware and begin their rampage, they take the moral high ground.  By that I mean they attempt to not kill anyone and feel remorse when they do ( usually ).  So at what point did objective morality enter the picture?  Technically they should have taken advantage of their stronger position and raised Hell.  But no, that would make us feel less sympathy for them.  As such the story feels forced.

Aside from theistic belief, having a moral standard only serves to delude you from the truth of your meaningless existence.  Belief systems such as Humanism are just a desperate last gasp to find moral reason in a worldview that demands we are no more than atoms in the cosmos.  If that’s the case, then these apes should have just steamrolled anyone who got in their way starting with Richard Dawkins, because that’s how nature works.  Morality is meaningless if all we are is dust in the wind….dude. 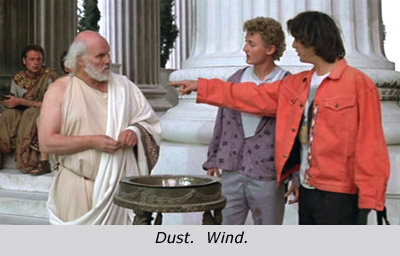 Obviously I don’t buy into the sales pitch of secular evolutionary humanism by any measure.  But what kind of ticks me off is people who do AND cannot follow the logical path of their own belief ( still looking at you Dawkins ).  That’s practically everyone I know who is one by the way.  But maybe I’m being too hard on the wrong people.  After all…this is Hollywood, not exactly a think tank for philosophical and theological studies.

Rise of the Planet of the Apes is entertaining, but it lacks consistency with its own message.  That somehow humanity is undeserving of its role in the world, while a species of animal is, simply because they’re not as cruel as we are.  I guess that means if I walk up to a pride of lions in the Serengeti with an outstretched hand of friendship, they’ll show me the same courtesy.

Many critics love this, but I just can’t get on side.  It’s too plot-by-the-numbers and lacks any real curve ball in the story.  What happens is what you’d expect, so you’re really just along for the ride.