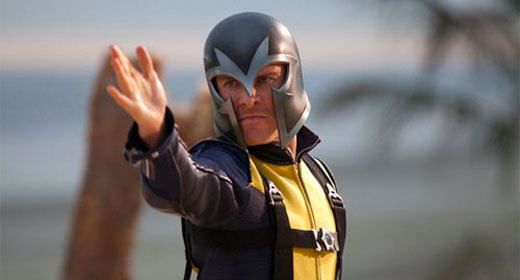 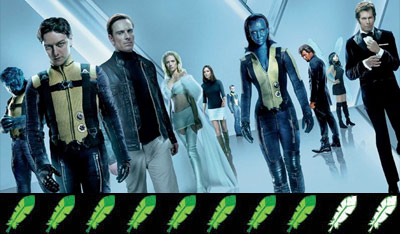 No doubt about it, X-Men 3 completely wet the bed.  In a franchise that started off so strong it ended with a whimper so crushing that somewhere an angel died.  Then to make matters worse, it kept digging the hole to the pits of damnation with X-Men Origins: Wolverine.  Any sane person could only conclude that the Marvel tale of mutants was a deader than a chicken-fried alligator.

And then X-Men First Class comes along and makes me a believer again.

XMFC is an original combination of 1960’s James Bond films and comic book lore that you just don’t see every day.  The timeline for this story is somewhat original as it takes place during the 1960’s with President JFK running the US.

The actors portraying Charles Xavier ( James McAvoy ) and Eric Lehnsherr (Michael Fassbender ) rock the house.  They’re really just the white versions of Martin Luther King and Malcom X.  The two have differing philosophies about how the mutants should proceed.  Xavier favors peaceful co-existence.  Eric however has had just about enough of this mankind crap.  Although he hasn’t yet turned to the dark side of the force, his intentions are fairly clear when he has a private chat with Mystique about how mutants should never hide themselves.

Kevin Bacon plays Sebastian Shaw, a two-bit villain who I never gave two-bits about in the comic book.  He’s corny, and sometime a bit over the top.  He’s…Kevin Bacon.  But in all fairness this is not a story about Kevin Bacon’s cheesy character  ( ha!!  bacon and cheese! ), it’s the “bro”mance story about Charles and Eric and how Magneto eventually becomes the greater villain.

The first X-Men movies took the concept of being a mutant and not-so-subtly made connections to homosexuality.  For instance, in X2 when Iceman tells his parents he’s a mutant and they respond, “Have you tried NOT being a mutant?”.   Some of that hidden agenda crap is still very much present which doesn’t even remotely come across as serious.  Mutant Pride? ( eyes rolling ) It sounds cliche, lame, and the lines feel so forced the actors barely get the words past their teeth.  Yeesh, the comic was about accepting different races and defending those who otherwise fear you, not where one decides to put their genetailia.

There is naturally an over-riding theme of human evolution that permeates the film.  Depending on your faith convictions or lack thereof, this will either offend you or not bother you at all.  Being a creationist myself I see evolution as being just as fictional as a guy who controls magnetism or shoots laser beams out of his eyes anyway. So in that context I have a fun time and eat my popcorn without proclaiming Jihad against the infidels…or something like that.  And hey, so should you!

The real story is that Magneto was never born evil.  We probably envision men like Hitler as being just a bad seed.   But evil is a process that takes advantage of what already lies within.  We forget that within monsters like Hitler also lied the potential to become a gentle man.  The most frightening thing is that the same potential for evil exists in all of us.  The greatest message of XMFC is we are all capable of becoming another Nero. Stalin. And yes, even Hitler.

XMFC shows how in us two natures are at war.  The choices we make can take us down a path of forgiveness or one of unquenchable revenge.  It is the journey of Eric from a Holocaust survivor to Magneto who as we all know sees humanity as inferior and unworthy of co-existence.   Thus Eric starts down the path of becoming the very evil that tried to destroy himself and the Jews.

If I have any complaints about this movie it’s two points.  One: Sebastian Shaw’s sinister plan is really, really dumb.  As in Dr. Evil kind of dumb.  Something about blowing the planet to kingdom come because nuclear radiation doesn’t affect mutants.  Uh…I’m pretty sure it does.

And two…the final battle of the movie shows Michael Ironside as a military commander.  This poor shmuck couldn’t get any other acting role if he tied a bomb-belt to his waist and walked into a room full of film directors.  And his lines were just sooooo cliche!  My suggestion, look at his part as comic relief.

Violence: Oh heck yeah.  Magneto is a one-man Nazi take down squad and rather creative.
Nudity: Well, none.  Technically. How do you define a topless blue woman?
Language: Counted two.  One F-Bomb courtesy of a cameo appearance by a surprise mutant, and one “G– damn-it”.
Family Rating: Not recommended for children under 13.  While the story is indeed campy and comic based, the action and themes are intended to appeal to the more adult viewer.

The Dysfunctional Parrot has the mutant power to clean out an all-you-can-eat East Indian Buffet and proceed to alter the immediate atmosphere around him.