Showing that truth and common decency have no place at FamilyRadio.com, Harold Camping and company are proceeding as if nothing ever happened.  Familyradio.com also cleaned away any references to May 21 in an effort to hide the embarrassment that they so rightfully deserve.

May 21 was going to 100% be the day.  Absolutely no ands, ifs, or buts. Rapture, earthquake, and rock and roll!!  Not anymore as according to Harold Camping, he is more sure than ever that October 21st is going to be the new deadline for the end of the world!

So what happened May 21st then?  Judgement of course, silly!…but it was invisible! Yup, Harold pulled a rabbit out of the old Jehovah’s Witnesses bag of tricks.  Unrepentant, unfazed, and unapologetic, the wolves in sheep’s clothing continue their  crusade of lies.

As a Christian myself, this whole situation just burns my backside big-time.  The legitimate, historical faith is being dragged through the mud by people who are NOT Christians in the first place.  Camping does not acknowledge the Trinity, is an annihilationist, and a flat out false prophet ( duh ).   It lifts my butt off the can every time the news calls this heretical twit an “evangelical”.

The gospel is being ridiculed more than ever as something that requires BLIND faith to believe in.  The scientific, historical, and archeological evidence for the real deal is being ignored due in part to the idiotic antics of Harold’s followers.  And make no mistake, they are followers of Harold Camping…NOT Jesus Christ.  Despite all the claims by Camping that he is well versed in the Bible and has devotedly studied for years, he is without a doubt the most incompetent of amateurs when reading the Biblical text.

Camping hasn’t even maned up and had the decency to apologize.  When May 21st happened he just hid himself away in a motel like the coward he is while trying to find a way to save face. He has demonstrated to be the worst kind of scum sucking bottom feeder…preying on the gullible and foolish.   People who want to follow the Bible, but instead have been reeled in by the worst kind of charlatan.

My suggestions?  Massive DOS attacks on FamilyRadio.com perhaps?  A huge advertising blitz by evangelicals to counter his crap?  Maybe mailing a rock to FamilyRadio.com for a touch of symbolism.  YEAH!!!  Seriously, if Camping tried this crap with Moses, he’d wind up more stoned than Keith Richards. 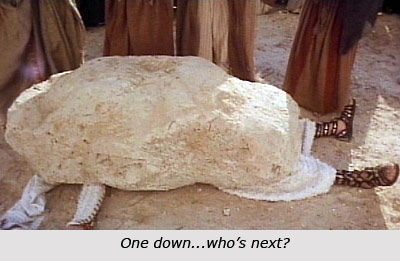 To anyone still following Camping…there’s just no hope for you.  You’re determined to follow a man not the Bible and there is no way to deny it.  It’s worse than the Watchtower cult.  Worse than Mormonism.  Yikes…Harold camping makes Tom Cruise seem like a freaking scholar.  Read your Bibles…WITHOUT the corrupt filter of FamilyRadio.com and you will see that October 21 will not be a your new Judgement Day.

The Bible guarantees it.