I can assure you all that there is no shortage of 5-step programs, modern techniques, and pop-psychology books all ready to give the desperate parent the ammunition they need to tame the unholy terror they have unwittingly brought into the world.  Some days you just feel like you have all the parenting skills of Anakin Skywalker.

This rant is for you. 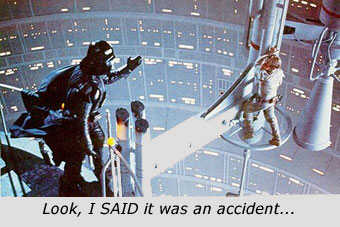 About 8 years ago I knew all there was to know about parenting.  I could even parent YOUR insufferable brats because I had the inside track.  Yes, I was a genius.  I was convinced that rearing a child was as easy as the Pavlov’s Dog experiment.  I even had my own newborn son who responded perfectly to my intellectually superior parenting.

And then he turned two, and decided to teach us some lessons!

My son, who is now 7, is my right hand man.  His sisters who are 5 and 2 are growing into wonderful women.  But my son, well…he had us in a parenting panic as when things didn’t go his way…BOOM!  Every now and then he asks what it was like when he was the age of his youngest sister.  I pull him close, give a man hug, and calmly explain that when he was two I would have happily abandoned him to a pack of raccoons if it were not for our oppressive liberal laws.

After we emerged from the terrible two’s ( 3 times, and one more “in the oven” yet to go ), we came to the only conclusion we could…me and my wife obviously DON’T have all the answers.  And it was at that point when we finally grew up a little.  That was when we stopped looking with veiled disdain at the mother trying to handle a screaming toddler in the store, and instead with a kindred understanding.  In short, we stopped being immature pompous asses.

I tried thinking about what it was that made us think we were “all that and a bag of chips” in the first place.  And it was so obvious…

We had them all.  “Dare to Discipline”, “The Strong Willed Child”.  All of them great books if…and only if…you happen to have a child who simply needs a little adjustment or is capable of rational thought.  In other words, if your child is the same as the authors!  We even had a series written by an Amish family that we had the nerve to give to people!   A useless series of books, as my kids have a combination of Scottish tempers, French tempers,  the German desire to rule and the Jewish intelligence to accomplish that goal.  That Amish author would get eaten alive in my house like a three-legged rabbit surrounded by hungry coyotes. 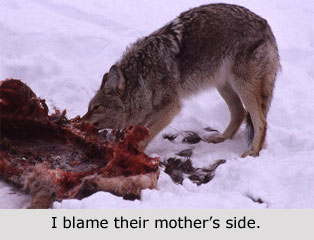 But the biggest joke is a book by Dr. Kevin Leman called “Have a New Kid by Friday”.  I’m planning my own follow up to his book called, “Have a Disillusioned Parent by Saturday”.  All I can say is if you happen to have a kid that easily gets “led by the carrot” then good for you.  But just so you know, your come-up-its are on the way!  I wanted to do a book review on that steaming pile of disappointment, but I’ll just get to the point and grade it right here… 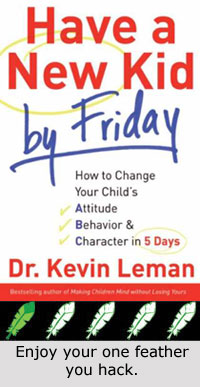 For the other 90% of us, such lofty goals in such short times do nothing except make us hyper-focus on our obvious imperfection.  Allow me to console you all with this…we’re all sucked out parents.   Your kids suck too.   Parenting is often the art of herding cats.  It is meant to be a humbling experience.  If your kids are going easy on you ( or biding their time! ), don’t be too quick to take credit!

Parenting is as much a character building exercise for the parents as for the kids.  It’s like the stock market: you have your gains and you have your recessions.  But by the time your kid is done being a projectile vomiting baby, to a snarly blue-haired teen with enough facial piercings that it that looks like they fell into a tackle box, to finally wrapping your new SUV around a telephone pole while fleeing his girlfriends father…you just have to hope that the gains outweigh the losses.  There’s no guarantees with this job.  You just have to love them and pray really, really hard!

That having been said, a few weeks ago I was asked for some parenting advice from a person who didn’t SEEM to be a complete moron.  I only had three key points to pass on that I’m actually sure about:

First, love your kids and take an interest in their lives. Do they like to study the effects of dry-ice on a zip-lock bag full of garden slugs?  I suggest you find a way to enjoy it too!  And relative to that, try to make your life interesting to them.  Get involved with each others interests.  Well, unless your interests are video games and Nascar of course.  In that case maybe work on being a more interesting person!

Next, I highly recommend meshing your spiritual journeys.  Group bible memorization is a great idea.  You may even want to try talking about really complex theological concepts with them in a casual setting.  They’ll understand more than you realize!  My son is probably capable of destroying a Mormon theologically just because we talk about Dad’s latest encounter with them.

And finally…and definitely most importantly…burn your parenting books.  Really!   About a year ago we gathered most of our child rearing books into a pile and I gave my older kids the propane torch ( the then one year old was not ready to be an arsonist ).  They earned the right!  I even sent a picture and an apology to one of my relatives of whom I’m sure thought I was an insufferable know it all.  Rest assured that I’m still a fat-headed over-confident egotist.   Just not about parenting.

So the next time you’re doing all you can do and nothing seems to work, don’t let some author whose kids moved out in the 80’s tell you they have it all figured out.  Take their advise in context:  that what works for them may not work for you.   I’m not suggesting never listening to advise, because that would mean you’re a confused parent and a habitual butt-head. I  would only caution falling for the one-size-fits-all approach which tries to fix an S-Type Jag with a manual for a Dodge Ares.

Any book that pushes this kind of pop-psychology is more or less useless to you.