Robert Dziekanski took a “combative stance” with his fist clenched around a stapler, causing at least one RCMP officer to fear for his safety before the Polish man was stunned with a Taser at Vancouver’s airport resulting in his death.  Such were the events on Oct. 14, 2007 when Officers received a call over their radios about an intoxicated man throwing luggage around the international terminal.  Apparently however, he wasn’t drunk, just crazier than a pet raccoon. 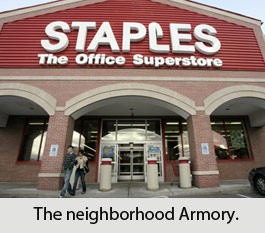 I’m a little distressed with how the media is trying to downplay the stapler.  Let’s just say that if a grizzly bear and an office intern with a stapler attacked me…and I only had 2 bullets…I’d have to shoot the intern. Twice.

Most would say this officer used sound judgement, as pumping several rounds from a glock would have been front page fodder for any news outlet.  I don’t know…maybe this is one of those instances where a distracting, “Holy Crap it’s Christian Bale!” and a football tackle could have really paid off.

But if banning tasers means more criminals will be fatally shot, then all I can say is…“dude, where do I sign?”.   Really people, I don’t think disarming law enforcement is in anyones best interest here unless we want them taking down armed bank robbers with billy-clubs…unless of course those clubs had nails or shards of broken glass in them, but I think that goes without saying.

My brother is a cop, and I have to say I don’t know how he does it.  And by “it”…I mean not emptying a round into every jerk who tries to test his limits.  I once contemplated the career path of a police officer before I took a deep look inside and saw the kind and gentle soul of a good Christian man…barely holding back deep childhood repressions that could at any moment erupt into a deadly hail of bullets while bellowing unholy screams like Lawrence of Arabia charging into battle!! HAAAAA!!! AAAHHHH!! AAAHHHH!!!!

So instead I chose the low stress career of a Systems Analyst.  Oh crap.

So what should the officer have done?  Easy, grab the nearest stapler and have a Mexican standoff.