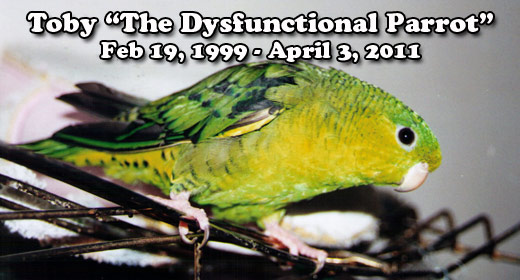 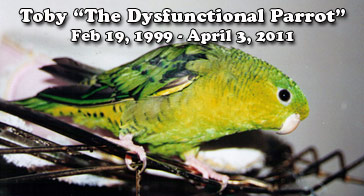 Surrounded by her human family, Toby entered into the presence of God on April 3, 2011.  At least I assume she did. Toby never made a personal confession of faith so its highly possible she’s roasting on the eternal grill of the Beast-Master.  My wife told me to keep that crap to myself however and not freak out the kids. 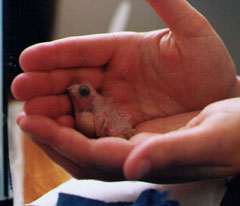 Many years ago me and my wife raised parrots and Toby’s Lineolated Parakeet parents were one of our many breeders.  When they laid the egg that would one day become the “original Dysfunctional Parrot”, we had little idea she would become the snorting, foot obsessed and slipper fornicating animal that we all grew to love if not somewhat wonder about privately.  Many a quiet evening with friends would be interrupted by Toby’s passionate relations with her slipper that would have the guests asking, “uh…what is your bird doing?”.

Toby had more lives than a box of kittens so I’m somewhat amazed she lasted this long.  She had a free run of the house in her early years and as such chased feet like a dog chasing a car.  After being stepped on I discovered that leg-splints for a bird are surprisingly expensive!  But we nursed her back to health only to have the dumb animal break the same leg again not a year later. 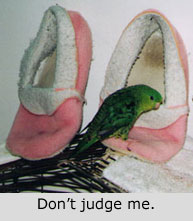 In total her leg broke three times in her life, but in all fairness the last one was not my fault!!  My son was carrying her and she flew off.  Down the basement stairs.  Splat.  Sigh, get the splint…

A couple years ago her room-mate Baily ( a black masked lovebird ) died and it was obvious that she missed her.  That too was a surprise as Baily was like that irritating college dorm mate that always goes through your things.  But I think Baily’s chipper nature was good for crotchety Toby much like Felix and Oscar from The Odd Couple.

But in the end Toby was quite old, having lived a long and well loved life.  She was surrounded by four very sad children when she went.  I wish I could say me and the Mrs. were overly crushed, as through the watery eyes of my wife I could also sense she had plans for the spot where the empty cage now stood.  And now we could wash the shooting bird crap off the wall and not have to constantly repaint it, so that was hard not to get a little excited about.

So goodbye Toby, the original Dysfunctional Parrot.  I certainly owe you for the inspiration. 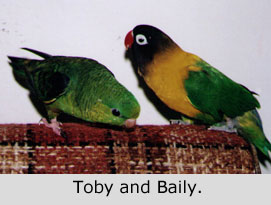