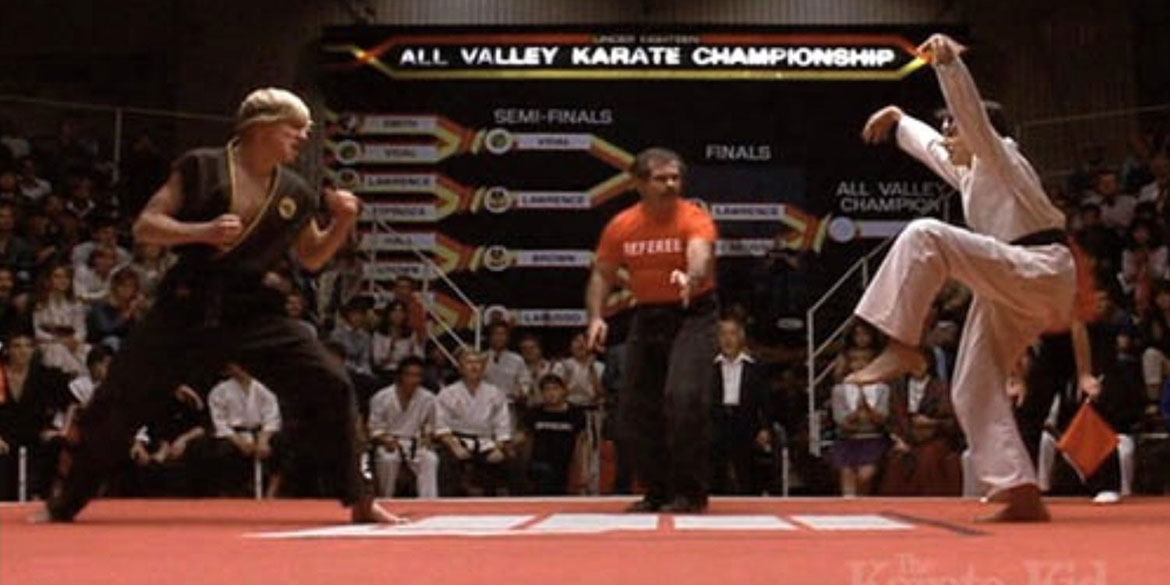 *Before anyone freaks out…again…about this article, know that I only hurt the ones I love.  I never regret taking karate, but I also have no fun poking fun at it.  Please accept this in the spirit that was intended.  Thank you.

Almost 15 years. That’s how much of my life was spent pursuing the perfect front kick.  The perfect punch.  Honor, loyalty, and everything that Mutant Turtles and Canadian Maple Syrup stood for.  Karate was my past-time that grew to overtake all else.  So what happened?  In short a lightbulb went off, I had a walk in the snow, and I finally knew it was time to get out of Dodge.

To give some background, I trained nearly fifteen years in Shotokan karate under the watchful eye of the infamous Yutaka Yaguchi Sensei, so to say my training was traditional would be the understatement of the century.  Even to this day I hold the highest respect for the man who is one of the last of a dying breed of true karate-ka.  But sometimes things that start off so fantastic, well…fizzle out and walking away becomes the best option.

Thinking back, I suppose I can trace the flash point for my joining the dojo life down to one man:  Mr. Miyagi.  That’s what you get for being an 80’s kid I suppose, but I guess you have to start somewhere.  So for your pleasure here’s 5 Reasons why Karate is Useless, all in good humor of course.

#1. Karate Teach You Not To Fight

You have no idea how true this is.

It is possible you have the impression that by taking karate you will radiate such confidence that everyone would be afraid to mess with such a highly trained killing machine.  In truth karate taught me as much about fighting as home economics would teach about kayaking.

Karate is broken down into two parts: kumite and kata.  Kata is a pattern of moves to give you the illusion of fighting multiple attackers who apparently have no problem coming at you one at a time, and with the speed of the slower-than-frozen-syrup lizard monster Captain Kirk fought.

Kumite on the other hand is basically putting up your dukes and seeing who can lightly tap the other guy first when the Sensei says “go!”.  Ever wonder why karate is often mentioned but never actually used in UFC?  Because traditional karate practitioners have one style of fighting…playing tag.  Sadly, that doesn’t stop every sad karate practitioner from trying to use some big name to justify their art.

Taking out a karate practitioner is fairly easy.  Get him off his feet.  After that he’s more cooked than a chicken fried alligator.  Without the sparring stance, he’s useless.  That’s why no karate expert would survive MMA without also taking Ju-Jitsu, which seems to be the fighting art of the conscientious consumer these days.  On the ground a trained grappler can still easily fold his attacker like a paper airplane.  But just to be clear, I’m not a fan of ridiculous MMA mini-mall dojo’s either.

Karate is for life.  Thus sayeth Sensei.  No conflict of interest there I’m sure.  But eventually you will grow up, get married, and have kids.  When that happens the dojo will treat you like the traitorous dog you are for having the audacity to put anything above karate.  It’s a total cult mentality, I swear.  And this is rampant in practically every dojo I have been in which at last count has been around six.  Mr. Miyagi had it backwards.  It’s not the world squishing out karate, it’s karate squishing out the things that truly matter…which I guess is anything besides karate.

This became strangely clear when I had my first child.  Naturally I had to miss a class or two due to the chaos that always follows a newborn.  Yet the attitude was veiled silence at my lack of attendance and when I tried to mention the little bundle of joy nobody seemed to have any sense of understanding.  As far as Karate is concerned, your family and friends can fend for themselves.  Honor dictates that you must prioritize practicing your horse stance above them.  I’ll leave you to decide how rational that is.

Leaving karate generally means several other things will happen.  Like most cult organizations, you will be accused of having no honor.  Or a bad Sensei.  Or your “style” was inferior.  Or you obviously went to a McDojo.  Or your training stunk like the inside of the dead gaigin dog that you now are.  Literally everything and anything will be blamed except karate itself.    As someone who deals with religious cults on a semi-regular basis, I’ve noticed the tactics are often the same albeit on a smaller scale.  Therefore if you plan to leave, don’t announce it.  Just stop showing up.  Trust me on this one.

Discipline is probably not the right word.  Tolerance would be best.  As a junior belt you will be afforded some leniency as fresh meat is needed to pay the bills and you don’t want to scare the little money-bags away.  But once you get about 5 belts up you will start to look like fresh brains to a starving zombie.  In short, welcome to the world of politics.  Are you now a black belt?  Prepare to drown in it.

Politics in martial arts is as prevalent as it would be in any other sport, only in karate is is veiled with the tagline “honor”.  In involves having fishing trips with the Sensei and suddenly wow…you’re getting more points noticed in a tournament ( I kid you not ).  As a senior belt I could never do this without feeling like a sellout.  It was dirty, it was despicable, and it was cheap.  It never taught discipline, it merely demonstrated ass-kissing.  That’s why TaeKwonDo is so monetarily ahead of Karate.  It pushes a “family” mentality that makes for happy parents willing to fork over more cash.  That having been said, I’ve seen little old ladies fight better over a Bingo card than TKD fighters.  Compared to Karate, TKD has horrifically sloppy technique but that’s another article.

It probably goes without saying that the original reason many start martial arts is to become a good fighter ( a questionable life goal, but whatever ).   The idea of slicing through the air like Jet Li and levelling a crowd of ninjas who are threatening you and your hot date is pretty much is every guys fantasy.

Truth is that if you attempt to use karate the results will not be everyone looking at you standing victorious over your aggressor.  Gorgeous young women will not fall into your arms and the unruly gang of teens will not stop, give a polite Japanese bow and allow you to carry on with your new found honor as the sound of oriental pipe music whistles in the background.

Most likely you will assume the fighting stance, and a Georges St. Pierre clone will dive-bomb you in the midsection so hard that you will literally fly through the air onto the concrete in two separate pieces.

Ok, we all know this assumption is baloney right from the start, but nonetheless there is a misconception with many karateka that their art is the King of the Hill.  Everyone else style sucks but yours, right?

When I first started I wanted this to be true as I had a dream to walk up to the school bully and punch him so hard his organs would liquify.  To round kick him in the gut with so much raw intensity that he would literally excrete his kidneys out.  And the solution was obvious…the crane maneuver!!  If done right, there’s no defence.  Damn you to Hell Mr. Miyagi.

But that of course, was just a movie.  What about reality?

Although every karateka will readily admit that there is no such thing as a “no can defence” set of moves that gives you an invisible shield of invulnerability, you’d never know it judging how they talk about how their style is so much better than everyone else’s.  Trash talking other styles is practically a requirement.

I’ve been in karate tournaments.  I’ve even won a few.  But one thing you can never, ever train into someone is that natural fighting instinct.  Daniel can wax the car and sand the floor until his arms are instinctive blocking machines, it just doesn’t matter.  The second an experienced fighter gives you the poker face and proceeds to fold you in half it’s game over.

There are guys who train all their lives and who are extremely good, yet never win a tournament.  Ever.  If you’re not born with the natural instinct of a fighter then experience shows one rarely can attain such skills outside of a hardcore military environment.

Maybe they should have just painted fences instead.