The year was 1986 and I was certain I was going to be a ninja.  I had the drive and I had the…well, I had the drive.  But I also had unrestricted access to piles of sheet metal for throwing stars, a woodshop for nunchaku and about a half dozen copies of Ninja Magazine.  Those skills coupled with my rad BMX, adventure and good fortune were a certainty. 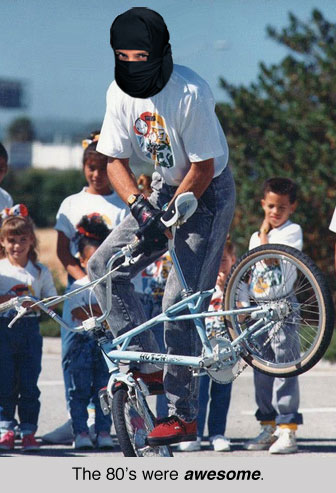 But I soon realized that running around on our acreage in a discount ninja uniform purchased with beer bottle money was not exactly going to turn me into a fighting machine.  So after an all night brain-washing session which involved watching The Karate Kid three times in a row with a six pack of Mountain Dew, I signed up at my local YMCA karate club.  From there I spent nearly fifteen years getting trained in several Shotokan Karate dojos under the regional head, the legendary Yatuka Yaguchi Sensei.  My career as a martial arts expert had begun.

But all things must end and from there I went to World TaeKwonDo Federation ( WTF ) dojang or as we call it in Shotokan Karate, slumming it.  As such I soon became a fluent in two martial arts languages.  Several of my family also have TKD black belts in various dojos and my son has also joined the local dojang.

So everyone ( yes, everyone ) asks me “DP, what’s the difference between karate and TaeKwonDo?  Which is better?”  Let’s start with the key components…

The difference in sparring between Karate and TaeKwonDo is dramatic at minimum and out-worldly at worst.   Simply put, we’re talking about two completely different animals here.

Admittedly many different organizations do things differently.  However, as a rule karate tournaments do not use padding with perhaps the exception of knuckle pads that only serve to minimize your opponents wedding ring imprint on your face. Karate uses a one hit/one point system which means both fighters move around a bit and look for the opportune moment to strike.  Reverse punches are probably the most common scoring technique as kicks are deemed too slow and tend to leave the attacker open to a counterstrike.  Each successful point stops the match and is resumed by the chief referee.  The match is over when the winner usually reaches 3 full points.

WTF TaeKwonDo uses full gear and this is probably for the best as the extreme volume of kicks practically begs for the occasional high impact body shot.  For that I admire TKD’s attention to safety because there’s nothing honorable about a concussion.  Points are tabulated by a panel of judges and recorded on a digital scorekeeper.  The point ranges can reach into the dozens and are almost exclusively kicks.  Attacks are rarely blocked and punches are not viable point-getters.  Generally the winner is whoever can activate their internal Tasmanian Devil Mode© and overwhelm the opponent.  There are occasional pauses in the match to allow regaining of composure.

To watch Tanaka perform Unsu or Gankaku is like watching a stalking tiger.  It is art.  The air itself is sliced and the power of each punch has no doubt caused many a cameraman to hemorrhage.  There is not a single movement that is not deliberate and laser precise.  I spent some time in Goju Ryu and Uechi Ryu and they are much the same.  Putting it mildly, there is no screwing around in kata.  A punch is a damn punch and a block means business.  A stance is a stance and getting it right takes years of practice.  Extraneous moves are severely discouraged.

Poomse in TKD seems an afterthought as sparring is the primary focus.  The stances are much higher to the point of not being much of a stance at all and movements bob up and down to the point of distraction.  The punches are unconvincing and the blocks just plain pitiful.  Worse yet, nobody seems to even care.  Out of five dojangs I visited I saw no perceivable difference in Poomse quality.  A multitude of YouTube videos showed much the same thing from high ranking WTF instructors.  Sad to say that when it comes to forms, WTF TKD is woefully inept compared to traditional karate.

So tell me why most TKD clubs are over a $100/month and many karate clubs are $20 or less?  It’s all in the business model my friend.  And it is here that WTF TKD is the undisputed champion.

While karate had it made in the 80’s, they certainly are a dying breed in todays consumer driven martial arts economy.  Rarely does a traditional karate club own its own facilities.  For many years I trained in a racquetball court.  These low prices mean you buy your own uniform and any other gear you require.  When I passed a test I even had to buy my own belts.

TKD on the other hand takes the high prices and puts it into things like large dojangs and equipment such as punching bags, loaner pads or complimentary uniforms for beginners.  It’s hard to say if one system is superior to the other as while karate is cheaper, it would be nice to have access to all that sweet equipment TKD takes for granted.

This of course brings up the classic term: McDojo.  I hate this word because I have seen it used in the wrong context so often.  If a dojo/dojang finds a way to be financially viable, that is NOT an acceptable use of the term.  True, WTF TKD is thought by many to be classic McDojo, but that should not be because they’re smart at business.  For this they should actually be congratulated.

When I hit the big time in karate I splurged on a Japanese uniform that cost well over $100 at the time.  It was thick, snappy 100% cotton and was worth every penny.  Karate uniforms are almost always made out of cotton and range in quality from the discount Century uniforms to top of the line Shureido and Tokaido with a whole lot of middle.  The top is put on like a jacket and the one side goes over the other.  If there is any flair on the uniform it is usually restricted to a small crest.  When I train at home I still like to put the old thing on from time to time just because it feels so badass. 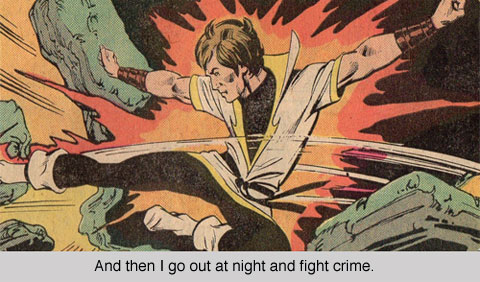 The same quality range goes for TKD although they are generally 100% polyester such as what was used back in China thousands of years ago.  They hold up to heavy use well, are lighter on the body and generally less expensive than their karate counterparts.  TKD tops are also one piece V-necks and more often than not the waist band is elastic.  Often higher up ranks have brand name uniforms that well… sort of advertise themselves a bit.  Adidas stripes are the most common effect and you can decide on whether that appeals to you or not.  TKD also likes to put club logos on the back and in extreme cases pepper that dang thing like a Boy Scout uniform with goofy badges although this practice is usually restricted to the kids.

Politics are one of those things that is very personal so my experiences may not reflect the greater whole.  Your mileage may vary but be warned, I have seen the inside of many dojos and my experience is rather vast in this arena so don’t tell me about your problems if you’ve only been in this game under 5 years.  You don’t know jack Junior.

One of the nice things about TaeKwonDo is surprisingly the politics.  Don’t get me wrong, TKD can be a dog-eat-dog world like any other when you reach higher ranks.  But let’s face it, with a WTF Certification it is easy as pie to pack your bags and move to another dojang down the block because there’s probably a half dozen of them.  As long as the check clears you’re welcome anytime!  With karate it would be easier to just smash your head through concrete. 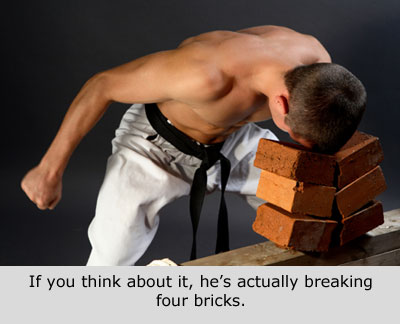 Karate politics are friggin’ intense and I discovered this when I was a brown belt.  I REALLY discovered it when testing for first Dan and once you’re a black belt it is nothing BUT politics.  And if you decide to leave your dojo and want to still continue with karate then well, you’re pretty much screwed.  Odds are there is not a similar dojo anywhere within driving distance and even if there was the Sensei’s exchange notes.  That means in karate you have to eat poop much more often because the club is the only game in town. Plus, because most clubs are volunteer operated your money is worthless.

Also, ever wonder why karate is not in the Olympics?  Simple.  Too many styles that would never agree to a common set of rules.  Yes, there are other TKD styles but the World TaeKwonDo Federation is big enough that they don’t really show up on the radar.  Karate organizations divide like a Starbucks loaded bacteria.

In short, karate politics are hip deep in power games and woe be it upon you if you pick the wrong side.  TaeKwonDo politics are more about business.

Ah, the ever subjective argument over which belt is of more prestigious value!  It is here where we will dive into the proper use the term McDojo.

First, remember that either belt has no intrinsic value in itself.  It is cloth.  If it is worth something to you then that’s all that matters.  Got it?  I myself still keep my silk Shureido belt in its original case so evidently in the back of my mind it must still have some importance.  Now chill out and continue.

WTF TaeKwonDo…well…how can I put this tastefully?  Look, I’m not saying having a club full of 10 year old black belts dilutes the…oh the Hell with it.  That’s exactly what I’m saying.  If a ten year old can pull it off then I think I know what the “WTF” means in WTF TKD. 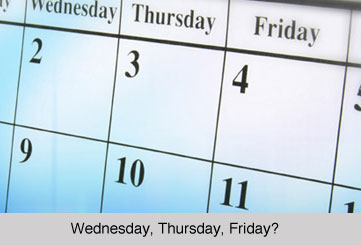 When I was in TKD I was amazed that after a year I was already half way to my black belt.  Wow!  It would have taken me twice that long in karate and I not once had to take Sensei out for an expensive lunch!

Sadly, this is where TKD is a victim of its own success.  I mean, you can’t exactly say “no” to all these paying customers who expect a black belt in 2 years can you?  The parents want a picture to show on Facebook for cryin’ out loud and maintaining high principles means managing a small bank account balance.  If Club A makes getting a black belt too hard, people just move over to Club B down the street and Club A goes out of business.  This causes an infinite loop that dilutes the art of TKD even more over time.

To conclude, if you can ignore the color around your waist and see past all the Kung-Fu Theatre idiocy then both TKD and karate can still be incredibly rewarding recreational pastimes.  The key to enjoying the one of your choosing is knowing what your tastes and expectations are before walking in the door.  If you can do that then maybe you too can enjoy a good run.

But if Facebook bragging rights are your intent I suggest buying a cheap uniform, belt, and fake certificate online.  Take your snapshot and move aside you lazy barnacle.