Before all you crypto-fans out there put the boots to my neck, understand that there are probably many reasons that Bitcoin is not entirely dumb.  In fact, I have a Bitcoin account myself and find the whole digital currency revolution a fascinating study.  So the DP is up with the jive with all you cool kids yo.  Down with the man.  Word up.  Plus, if you all don’t mind donating a little Bitcoin to my cause that would be appreciated. 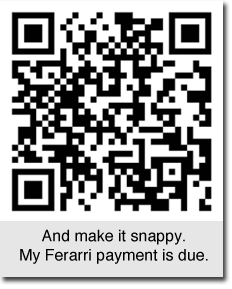 That all having been said, in recent weeks I have done a fair amount of research into crypto-currencies for the sake of a novel I’m writing and as such have come up with some rather interesting observations.  As cool as Bitcoin is, there are a few rather dumb aspects about it worth mentioning…

“What are you doing?” my wife asks as I lay on the floor with an open PC case. I look up and lift my goggles to reveal eyes filled with seven kinds of crazy.

“It’s a science experiment!”  I flip the goggles down and grab a soldering iron.  Truth is I’m not soldering anything, but it makes me look more professional.  I’m also not upgrading but rather taking compressed air and ensuring the CPU fan is all clean for the task at hand.

My mining rig was unimpressive and destined to fail.  I used a straight up CPU miner on an i5 Hackintosh ( CPU mining vastly inferior to GPU ) and an NVidia graphics card ( ATI is much preferred ) in a Windows 7 PC.  Total hashrate was barely 500kH/s which in lay-men’s terms…sucks.  It’s like taking a ride-mower to Nascar.  But this was just designed to be an experiment so it was full steam ahead. Due to Bitcoins being astronomically out of reach for my rig, I started with Dogecoins.  For those not familiar, Dogecoins are the pimply faced Buckwheat cousin of Bitcoin originally created as a joke.  It would take a whack of them to equal the penny you just found on the floor.  But the hashrate was do-able and the community rather fun to interact with so I thought it was a good place top start.

Once my allotted time was over the moment came to count my vast crypto-currency hoard.  The end result?  Over the course of a few days and a little downtime to let the CPU’s occasionally cool,  my total tally came to barely $1. 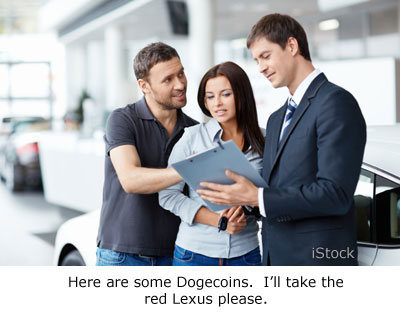 That would buy me a pack of gum as long as I was able to find a quarter between the couch cushions to make the difference.  Oh wait, after power costs I’ll need you to loan me the whole amount for the gum.  My second option was to bump up the video card but that would still be insufficient to warrant my time.  Bottom line, with huge companies doing high end processing in server farms or kids using their parents power at no charge to them and having multiple high end video cards for processing, the average middle income schmuck is hopelessly outgunned and is best not to even bother.

4. Woefully inefficient use of time.

Like I said, after my short lived experiment my take home total was barely $1.00.  Technically I can make that or much more doing practically anything else such as…

Recycle 10 aluminum cans for a dime each.
Have a medium latte instead of a grande or skip coffee altogether.
Bag a lunch.
Drive the speed limit and save gas.
Fall asleep on the couch with the lights off for a few hours.

It should also be noted that none of these require any start-up costs such as buying expensive video cards with good hash-rates.  It’s just all 100% profit.  So at this point if you absolutely must have some Bitcoin and the idea of holding cold hard cash in your hands is distasteful, just go out and buy some. 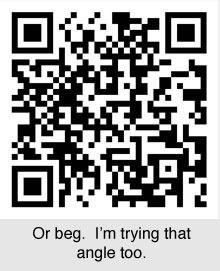 3. No buyer/seller protection. None.

Once you send a payment via Bitcoin or any other crypto-currency, she’s gone and there is no recourse if your seller stiffs you.  There is no Bitcoin hotline or central agency to reverse the charges or nail that sumbitch to the wall for fraud.  Protection is not in the cards.  Some say this is a strong point of Bitcoin but I’m not sure how that logic works.  Seems like one Hell of a glaring omission if you ask me. For example, there has been much thievery done through PayPal where a buyer obtains coins on eBay ( dumb in itself ), gets them and then gets a refund for goods not delivered.  The seller is out the coins and his money.  With a credit card system at least there is some wiggle room but without an escrow service you might as well kiss the coins goodbye forever.  Which brings me directly to the next point…

Quick quiz: Who on the Internet can you trust besides me?  If you guessed any number other than zero then I’d like to buy your Bitcoins with PayPal.  The problem with Bitcoin is that the level of trust between transactions resembles a gang deal.  Vinnie shows up with his boys and you scan his QR code to make a deposit.  The money is confirmed or the boys break your legs.  In that sense Bitcoin transactions do seem to have a traditional if not interesting means of trading hands.  Perhaps this is the reason the currency has been associated with drugs and laundering.

Suffice to say, dealing with reputable individuals is not that easy given the recent implosion at the now 6-feet under trading firm, Mt. Gox.  To summarize, 850,000 Bitcoins flew away to the land of Oz.  What was Mt. Gox’s solution?  First it was panic.  Then all the employees started stealing the staplers and fleeing the building.  Finally it folded up shop and left account holders screwed.  As their holdings had no recognized value in the first place because they were just imaginary bits, customers might as well forget about any recovery. Ok, so hackers are going after online firms and wallet companies to get your coins.

Well if you can’t trust online wallets to keep your Bitcoin safe, why not create and store one on your own computer and skip the middleman? I want you to stop and think about that.  As a systems analyst the idea of average people taking care of personally encrypted wallets with passwords of “12345” and a backup strategy best described as “never” gives me hives.  Compound that with the fact most people use Microsoft Windows and surf the Internet with a “lets see what happens when I click on this…” attitude, I’m not sure that option is going to pan out very well. 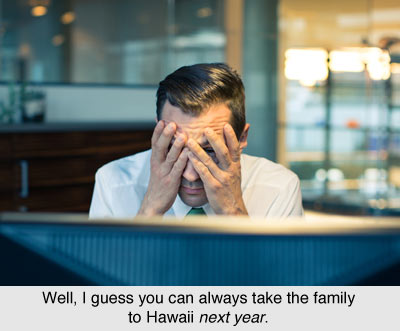 1. Bitcoin has no Real Value

I get it, real paper money has no actual value either beyond what the government says it does.  Trust me, after the Y2K fiasco I’m intimately aware of the basics of currencies.  But at least with cash if some North Korean hacker wants it he’s going to have to get on a plane, come to the northern tundra of Canada and physically take my wallet.  And banks are really, really good at making sure nobody takes their money.  Plus with a bank or credit card your account is insured.

In truth there are only 2 things in life with real intrinsic value.  And if you guessed gold and silver then congratulations…you’re dead.  The cannibals are eating your corpse and using your gold coins to pick their teeth. No, the only things with true value are food and shelter.  Gold and silver have traditional value, but neither will help you if all currencies fail.  At that point beans and ammo will be the currency of choice. 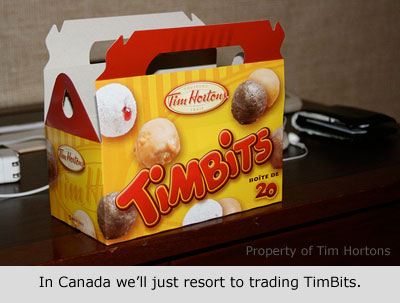 Due to being a physical object, no matter what happens gold is gold and it will always have some value.  Bitcoin is, well…nothing.   It is just a concept like WoW coins or Miley Cyrus’s career.  Unlike paper money you can’t even burn it to keep yourself warm.  Plus, most Bitcoins are owned by a very small amount of people which makes it ripe for price manipulation so it seems it is not necessarily the libertarian currency everyone was hoping for.  So please knock it off with the Guy Fawkes masks already.  You’re scaring the children.

Right now Bitcoin has less of an investment feel and more of a Cabbage Patch Kid vibe to it where everyone wants one because everyone else does until one day someone says “Hey!! It’s just a doll!”.  Then will come the panic unloading.  The Emperor will be seen for the naked exhibitionist he is and prices will hit the floor.

That having been said, at the moment Bitcoin does have significant perceived value and appears to be doing relatively well despite the negative press.  Who knows?  Maybe this is where it’s all going.  Will Bitcoin be the final image of what crypto-currency will be?  Not likely.  But it is a glimpse into what may well be our fast approaching future of trade and commerce.  At the end of it all, perhaps out there is one coin that will rise up and have something for everyone. 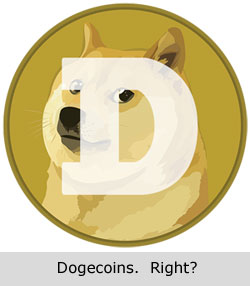