My initial reaction to Hip Hop Abs was expected…what the Hell is this??  So for some time it sat collecting dust as I ventured on to other more traditional workout videos like P90X or Insanity.

Yet in all that time it glowed in the back of my shelf.  Calling me.  Whispering to me in my sleep.  So after years of denial, self-hatred, wetting the bed and discount therapy,  I finally obeyed…

Like a seasoned actor training for Hamlet, I too had to get in character.  I had to forget I was a 40 year old white, suburbanite systems analyst.   This required some additional equipment to make an accurate measurement of my progress from two-left-feet-goof to cool.  With the use of my patented BRO-METER©, I took regular measurements to monitor my progress.  For accurate calibration I set the meter to the coolest man in the known universe, Samuel L. Jackson.

Now, I’m ready.   If funky dance was a drug, I’m prepared to sell it by the gram…even if I have no idea what I’m saying.

The intro starts with a mini rap montage by Shaun T.  Suddenly I feel like I’ll need to add a couple shots of tequila to my recovery drink to get through this.  Yet it begins…

The formula for HHA is Tilt, Tuck, Tighten.  What this does is make the entire workout one long isometric crunch.  The last 6 minutes are on the floor doing more conventional ab exercises. Regardless of what you think of the whole package, at the end you indeed burn your gut but darn good.

The routine itself and Shaun T were not that awkward.  In fact, I like Shaun.  It’s his interesting co-stars that made me feel like I stumbled into the Blue Oyster Bar.   Therefore my first day was going to be spent getting conditioned to these small irritants.   For example…can someone put some duct tape over Tonya’s mouth so she can STOP BLINDING ME WITH HER TEETH!!!   If you have time to smile non-stop during your workout, you need to work harder.

After my workout it was time to check in with the Bro-Meter©.  Wait…what the…???

After my dismal first day, I vowed to give it my all.   So when the time came for Fat Burning Cardio, I had to get in touch with my inner-Homie.  This workout is a series of dance-like sequences that always remind you to tilt, tuck and tighten.  The workout has you jumping all over the place by doing series of movements that get the sweat going.  At about the 15 min mark, I was beginning to loosen up and not feel so weird.   Afterwards it was time to read the meter once more…

Interesting.  I would have thought Donny was whiter than mayonnaise.

Second verse same as the first.  The main thing that separates this from the others is the addition of a lot of squats and knee lifts.  Awkwardness aside, this was actually really tough!  Almost as tough as watching the co-stars.   The little self-congratulatory twirls at the end of each sequence by some of the more flamboyant members really made me have to work for this!

Really…just who are those guys in the back and why do I feel like they’re stalking me?   One of them looks like rock-hard-abs were grafted onto Justin Beiber and he’s always smiling at me.  I feel dirty.  But at the end, I strapped the meter to my nipples once more for a reading…

Son of a bitch.

This is a special feature done on a dance floor, not in the standard gym studio of the other workouts.  Everyone is in their proper attire and ready to bring their A-Game.  For me it was immediately clear…I’m in way over my head.

Therefore the time had come to invoke the nuclear option:  tap into the only white man to ever completely understand true hip dance culture.  Yes, it was time to draw upon the white hot, intangible power of Vanilla Ice.

Learn to Dance is less about fitness and more about teaching you how to get a series of dance moves to take with you to the dance club that you have no intention of going to.  So get your baggy pants on and be prepared to slide, hop and get giggity wit it YEAAAAHHH!!!!!

Learn to Dance took at least five attempts to get somewhat skilled at it.  What gave me the edge was ten years of Karate which spent much effort memorizing complex sequences of moves.  If HHA was karate, this would indeed be the kata.

All joking aside, if you can nail this sequence then I have to admit you’ll look pretty impressive.  Just don’t expect fast results if you’re anything like me, as when it was over I still had the dance-floor skills of a drunken bear.

So at the end of my introduction into the world of Hip Hop dance, how did I finally fare on the Bro-Meter©?

My overall opinion is that this special feature is best intended for those who have at least some desire to dance.  For most of us it will be like a drunken trip to Vegas.  Interesting, but best left forgotten and certainly something you can never tell your children.

If your first introduction to Shaun T was his Insanity and Asylum workouts then my friends, you are in for a treat straight out of the corners of the Twilight Zone.  Hip Hop Abs was Shaun’s first foray into the Beachbody.com fitness video scene and as such he is much less trainer and much more a metrosexual dance instructor.  That having been said, you’ll like him anyway for his fun “Will Smith” style.   He’s like a really cool guy who just happens to have a lot of creepy-as-all-Hell people surrounding him.  Much like William Shatner at a Star Trek Convention.

I’m not going to come down hard on Hip Hop Abs for production values as this came out in 2003.  For its time, this was a pretty bad-ass production compared to what was generally available.  The video quality is superb and the sets are actually really good.  Nothing complex: No blasting primary colors, no over the top color-coordinated participants and no nerve grating music ( unlike contemporary hip hop music ).   That means these videos had a bit more staying power compared to their flashy counterparts that can be so hard on the eyes you need snow goggles to get through them.   Plus the apparent success of Hip Hop Abs was the springboard Shaun used to create the Insanity training program as well as a host of others.  One of them even being a rebooted dance-workout known as CIZE.

But does Hip Hop Abs work? 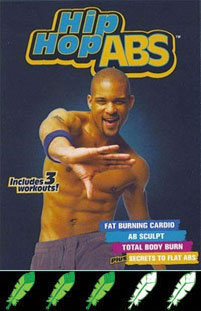 I committed myself to 3 weeks of Hip Hop Abs for the sake of this review.  During that time my abs did indeed feel like someone was dropping coconuts on them from two stories up.  And like it or not, the active cardio movements did indeed make me sweat awfully darn good.   The fat burning cardio is the key to the success of HHA because the less fat you have, then obviously the more defined your midsection will be.  Plus I have to admit that after my initial awkward feelings during the first week, I actually was having some fun with the whole thing!

Rating Hip Hop Abs is a difficult task.  For me it was an interesting journey into the realm of getting down like a deadly sweet da-bomb…yo.  Ya know what I’m sayin’?  ( No really.  Do you?  I sure as hell don’t. )  But as a long-term fitness plan it just was NOT going to work out!  HOWEVER...for those who love to dance, groove, get down…or whatever you dang kids call it these days…this will absolutely be your thing.  I would give it 4 out of 5 based on production values, originality, and fun.  But I would also drop it to 3 Feathers for not being a program you could keep with long term and probably a 2 for the way-too-happy co-stars.   Therefore, I’ll split it down the middle and rate it as 3 Feathers.

Now if you’ll excuse me, I need to spend some time getting out of character and return to my regular self.  A few days of doing the Chicken Dance and the Makarana should suffice.

The Dysfunctional Parrot would advise all husbands to NOT let your wives catch you doing Hip Hop Abs unless the idea of spending thousands of dollars on marriage counseling appeals to you.