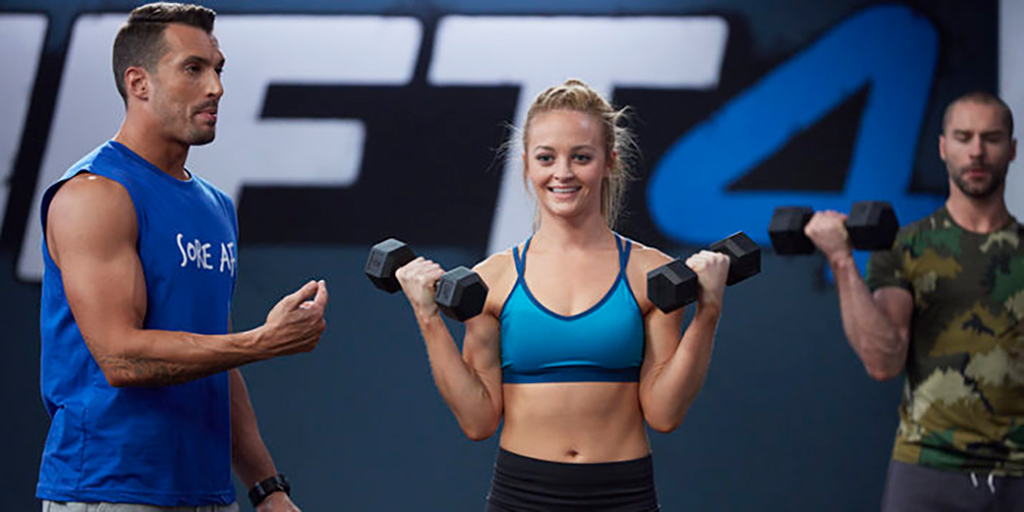 REVIEW: LIIFT4
8.3 SCORE
Pros
Cons
Summary
LIIFT4 combines heavy lifting and intense cardio to transform your body in 4 days a week.
Trainer9
Production Values8
Strength8
Cardio8
Is it just me or has there been an extended quiet time between workout releases from Beachbody?  I should probably be grateful given that it has afforded me time to finish a book and catch up on some long overdue fishing.  But summer is over, kids are back in school and it’s time to once again see what’s new on the Beachbody tele’.

Joel Freeman is now getting the push from the dark overlords to take a more prominent role in the trainer roster at the Big B.  You might remember him from Core de Force which was a martial-arts themed series.  It was an acceptable first outing, although I’m a hard one to impress with punch/kick workouts since they all seem alike.  LIIFT4 however, looks to have significantly broader appeal.

Some may also wonder what my delay is in my reviewing this.  Well, blame Beachbody.  If I waited until Oct 1, it was available on BOD.  Early access was $50.  I’m half Scottish, so that wasn’t happening.  Hard copies had one heck of a price range to add to the mix.  $75US not including shipping for just the disks, which is pointless if you intend to get BOD.  From there it went all the way up to $470US for the mega bundle.  You can play the bagpipes over my rotting dead body before I’ll part with that kind of cash.

You might as well pony up the cash and pay for a round of Beachbody on Demand because it’s the better deal.  Once I navigated the seventh circle of Dante’s Inferno trying to re-activate my account on their insufferable website, I was able to finally get down to business.

It appears the diabolical scheme is to bring about the best of both worlds: combining lifting big with strong cardio.  LIIFT4 is an 8 week / 60 workout program that has no repeating videos except the recovery ones.   Workout duration hangs out in the 30-40 minute range.  Word has it Caesar Daikeler Augustus told Joel to give them something that mixes a little Body Beast with a dash of Insanity.  Should he succeed, Joel earns the sweet nectar of freedom.  Otherwise, his dog dies.

You will be well served by a medium to heavy set of weights.  LIIFT4 is mostly circuit training, so you’re not going to need maximum iron like Sagi might demand.  Still, you are expected to work hard and pull off 10 reps for the resistance portion.  A foam roller and a yoga mat would also help for recover days.  I found a bench was more preferable to using the floor, so if you have one by all means use it where applicable.

All workouts from Weeks 1-6 follow a weekly format of 4 main routines:  Chest/Tris, Back/Bis, Shoulders and Legs.  Three days are left for recovery or stretching.  However, how each workout is performed changes from week to week. Generally if you do weights for a workout one week, the next is “Liift 50/50”.  This alternating schedule continues until Week 7 where it gets a minor shuffle.

LIIFT is a loose acronym for Lift and HIIT.  When a workout says it is LIIFT 50/50, that means it’s half weight training, half HIIT.

The moves are refreshingly not complicated.   The format is doing a sequence of moves, resting, then repeating that sequence three times.  If the workout is 50/50, then there is a HIIT and Core sequence in the mix.  If a circuit, then a Burnout and Core component is added.

Here’s the deal, LIIF4 moves fast.  Have your weights ready to go and easily accessible from the start because this is essentially cramming a P90X-worth of moves into roughly half the time.  Even the warm-up is only a couple minutes at best.  The rapid succession of moves has the added bonus of giving the weight training portion a significant cardio punch.

Switching things around so Chest and Tri’s starts with a circuit instead of 50/50.  That means 2 4-move circuits, one burnout session and a final core circuit.  All of there are performed 3x.  All moves are standard presses, flyes, kickbacks…old school goodness.   This is a killer on par with Body Beast.  I’m pumped to see where this is going to be by week 8.

Back and Biceps 50/50 likewise switches things up by having the last half being mid-impact cardio.  Shoulders LIIFT keeps it simple with 3 sets of three moves all done the usual 3x.  And finally, Legs LIIFT 50/50 foregoes the weights entirely this time to focus on only one set of 4 moves ( 3x regular/2x burnout ).  All finish with a Core/abdominal component of 2 moves done 3x.

Optional audio tracks are great…when they work and all.  The problem, at least in iOS anyway, is having 2 apps running simultaneously that use the audio function.  If you recall my gnashing of teeth over the same problem with 80 Day Obsession then I won’t repeat myself.

This is starting to catch up with me as I’m not taking a whole lot of rest days.  In order to get this review out I’m going straight from one week into the next with no rest.  So my goal is to get through this week then take advantage of the rest before going for the grand finish.

Ches/Tris now moves into super-sets with three rounds of lifting followed by three HIIT moves performed 3x.  Back and Biceps returns to circuit with rows, pullovers and curls.  You are expected to up the weight which makes the two rounds of three moves rather grueling.  Some back extensions and full bicep curls finish it off in a burnout session.  Shoulders remain LIIFT Intervals for the entire first 6 weeks.  Legs LIIFT 50/50 absolutely kills the legs with lifting only to finish them off with a cardio+burnout circuit.  Take that rest day folks.

At the end of each week, the cast sits round Sensei Joe and bask in his wisdom like petunias in the noon-day sun.  The previous weeks trials are discussed and the upcoming week is explained.  Also, you will be subtly told that if you want to succeed at not being a fat loser, it might be best to rack up the MasterCard and buy a years supply of Shakeology.  I guess the kids don’t get shoes this year.

Chest/Tris keeps the weights the same as Week 3, but instead of super-sets we have 3 rounds of 4 moves that alternate between chest and triceps.  The end burnout round is a #$@! killer, but that might be due to my lack of rest days catching up with me.  Try not to pass out when you lie down for the obligatory core work.  Same with Back/Bi’s  which is back to 50/50 this week.

I do want to offer a personal opinion on the 50/50 workouts…I’m not really a fan of them.  The circuit workouts are freaking amazing but stopping a good weight training session to do relatively medium intensity cardio feels like trying to put the freight train in reverse.  Maybe it’s because I’m older and hate change.  Stupid kids.

Shoulders retain the same format of LIIFT Intervals, so the 50/50 issue seems to bother me most with Legs.  Lifting has more benefits for me, so going just HIIT on the lower half makes me feel like I skipped a week.  Again, just my observations.

The only real difference here is increasing weight as the moves are just recombinations of previous motions from Week 3.  This is the last week of this particular combo before going into Week 7: Shred It.

The last week of the Build It cycle is upon us before Joel unleashes the Hounds of Hell in weeks 7-8.  Six repeats the same concepts as Week 4.  After this the muscle groups get shuffled around for the final two weeks.

The Shred It weeks are now upon us.  Your cries for mercy will not be answered.  Joel is now intent on crushing our bones to dust, seeing his enemies flee before him and to bask in the lamentations of the women.

Things change a little for weeks 7 and 8.  What used to be Chest and Tris now switches up to Chest/Back.  Legs are 50/50, Shoulders again stays the same for 7 and becomes Shoulder/Arms for week 8, and a Full Body HIIT is thrown in.  It is clear that at this stage of the game your weight should be noticeable higher than when you started.

The only real new workout is Full Body HIIT.  In Week 8 this one has all hands on deck.  All the moves are familiar from past workouts, only now the entire time is spent doing them.  I recommend finding a decent soundtrack to help you through this.

When Week 7 is over, the cast has one final walk through memory lane before plowing through the final week.  As before, the peons worship at the feet of their demi-god and those who have not been bathed in the waters of Shakeology shall be sacrificed in a volcano.

It has been a long, long time since Beachbody has come out with a program that really took weights seriously while adding a cardio component that didn’t overtake the program.  The P90X series might be the last time this was really done to true success.  LIIFT4 is almost like the basic movements of Body Beast combined with a toned down T25 cardio.  For me at least, this was a welcome addition to a catalog that was starting to feel very cardio top-heavy.

Although modifying is possible, LIIFT4 is not a program designed for beginners and that was a smart move.  There are already a host of programs at Beachbody to choose from and to be honest, I was wanting something with a little grit to it for a change.  Fact is that as one gets older, weight training becomes critical and is probably the only way you’re going to get out of bed.  As such, LIIFT4 is not just a program for the young.

The iOS Beachbody on Demand app does have its times that try men’s souls.  I’ve had a few instances when the thing would not log in or load content.  At 6am, that makes a crusty bastard like me pretty sour.  If the wind is blowing just right, you can still hear me yelling.

I give LIIFT4 a score of 4.5 feathers out of 5.  It visits old ground that has long been ignored and the weight training is simply fantastic.  The lack of music track is unfortunate, but at the same time I noticed it less and less as the days went by.  Joel Freeman as a trainer is superb.  Funny, but not over the top and always careful to explain ahead of time what is expected of the viewer.  I eagerly await what new project is around the corner for Joel, and hope he maintains a strong focus on resistance training.