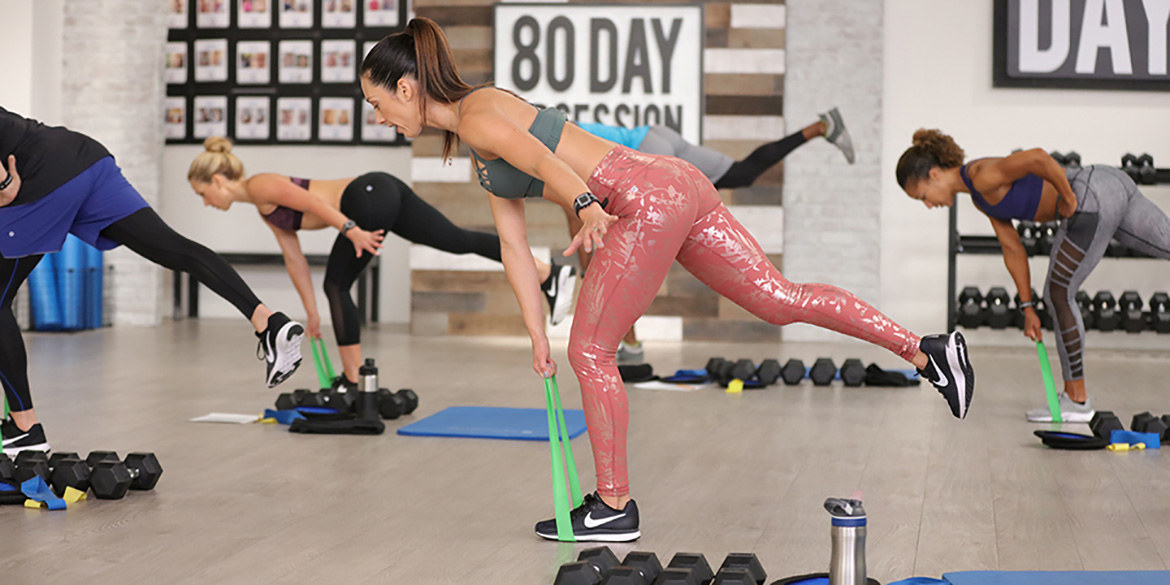 No rest for the weary as I dive straight from A Little Obsessed and right into 80 Day Obsession, the next in Beachbody On Demand’s exclusive releases designed to drag you kicking and screaming into giving them your credit card information.

I was going to break this review into several parts but decided against it for several reasons.  Not the least of which is that the workouts, although individual recordings, repeat themselves so my concern was that a 2 part review would be redundant.

First, be aware that like A Little Obsessed, there is no tracker bar or music track.  Therefore the option given is a collection of Spotify playlists one can fumble through in the Program Materials section.  Moving between 2 apps is somewhat of a pain but I guess that’s the way it goes.  I took a quick gander at the tunes and well, Autumn’s playlists look like they were curated by a committee of soccer moms.

Equipment required will be the same as A Little Obsessed:  a decent mat, a set of resistance loops and strength slides.  One commenter mentioned swapping with furniture glides and be damned if they don’t work just peachy.

How it comes together

80DO is broken down into 3 Phases, each lasting roughly a month.  The workouts, although repeated each week are individually shot videos, so there will be little to no repeats.  As each phase progresses, so does the difficulty.

I would be remiss not to mention that the BOD app is a little flaky at times.  I’m currently using an iPhone 7 ( iOS 11.3 ) and Air-playing to an AppleTV.  The Airplay option is reliable only if I turn mirroring on/off, then Airplay the content.  Sometimes I have to force quit the app and restart for workouts to show up at all.  A little disconcerting at times.  The company is fairly quick on patches so things seem to be improving as Billy the app-programmer gets occasional motivation via electrified nipple clamps.

Squats, leg-lifts done with and without weights throughout.  Sometimes we have to break out those bands but for better or worse I was able to modify.  Expect to develop rather impressive power-packs and a cure for those long days of sitting at the office.  I also noticed some increased durability on my lower back which was very welcome.  The old thing has seen better days.

While highly effective from a heart-rate point of view, Autumn’s cardio routines are in my experience boring as a Nunavut weather forecast.

Lots of skipping and hoping.  Occasionally you break out the sliding pie-places for some ab work.  It feels a bit repetitive ( because it probably is ) and eventually I just grabbed a jump-rope and did my own thing.

Two rounds of 15 motions that alternate from abs, arms ( curls, rows, flyes ) and the backside.  Sorry to say, I really didn’t like this set of workouts at all.  It’s a little of everything and a lot of nothing.   Plus using those sliders and bands just add complexity where some imagination could discard them entirely.

Men in general will find the limited collection of upper body movements frustrating as they amount to little more than a warm up.  Doing a few cycles of curls a week for example, will provide exactly diddly-squat for growth.  Like all of Autumn’s workouts, the top half really takes a backseat.

If AAA is a pointless voyage into the abyss, Legs brings us back to what should have been.  Instead of floundering randomness, this one is clean, targeted and delivers on the name.

Again, legs are Autumn’s bigger strengths which makes sense from a female perspective.  Women tend to want the firmer butt and lean legs like Black Widow, while men desire to be shaped like Johnny Bravo.

That all having been said, this one rocks and I can almost forget that I was asked to use resistance loops.  I did have concern that Autumn’s “co-stars” were going to be the victims of a Janet Jackson level wardrobe malfunction.  Rather than dwell in ignorance I pulled Mrs. Parrot aside and asked how breasts and spandex can co-exist in such a precarious balance between good and evil.  She just cuffed me upside the head and told me not to even think of writing that in my review.   I guess that means by the time you read this, I’m already in the doghouse.

I must say, without music this is so freaking boring.

So either have 2 phones, a stereo or ask your spouse sit in a lawn chair and hum their best AC/DC.  I opted for none of the above because it’s 6am, I haven’t had my coffee yet and I don’t have time for this nonsense.

Some of the moves are a little ambitious.  The jumping mule kicks did nothing but demonstrate my clumsy acrobatics.  This is more of a balance cardio workout with a little plyo thrown in so don’t expect a Max 30 level kicking.

I do love my foam roller.  So much so that like my bolt-action 30-06, you can pry it from my cold dead fingers.

While all the workouts are repeated week after week, these two are only done once in the beginning weeks.  So they are there if you need them, but I can see why there would be no need to create separate productions for something that doesn’t really change all that much.

Having almost 80 individual videos made this a particularly challenging review due to the long haul.  It also made it a difficult series to get through based on some small technical issues I mentioned before.  However, if you have a means of tackling the music problem then you’re set.

Gotta give credit, Autumn delivers a hell of a package here.  It takes a lot of drive to make this many videos for one program and thankfully the outcome is one that has broad appeal.  Women will love it and men can easily grab a dumbbell where required to modify in some heavier sets.  I appreciate this change of genre for Autumn because oy’ vey, Country Heat was a tough slog to get through.

Ultimately I give this a higher recommend for women due to the heavier focus on lower body.  The lack of upper body strength training might require a few hybrid workouts to fill the gap for us guys but don’t let that dissuade you.  Mrs. Parrot tends to agree here, women will find this a very challenging series that thankfully doesn’t get “girl-ish”, and I was able to not feel like I was at a cheerleader camp.  But if you want fast, strong, durable legs and a bitchin’ core, then 80 DO is the undisputed winner.  It’s because of this superior area that I make up some of the scoring losses for upper body.

I’m giving 80 Day Obsession a good 4.2 Feathers out of 5.  Music notwithstanding, it pretty much always kicked my backside.  It breaks the pattern of sub-30 minute workout programs out there, but to that I say “good”.  In doing so this avoids becoming niche and instead takes its place as a serious training program.

An ambitious project to create new daily content for 80 days straight. Autumn manages to create a series that has somewhat universal appeal, although women may gravitate to it more.

BOD app seems to get regular updates to resolve issues.

Production values take a hit due to lack of soundtrack.

Spotify integration has a few bugs to work out.