In part one we looked at gardening during a global agricultural grand-mal seizure.  Well having the best corn on the block is just freaking fantastic until the Ayatollah of Rock n’ Rolla, the Humongous comes with his motorcycle gang to raid your garden, and quite possibly your virtue. 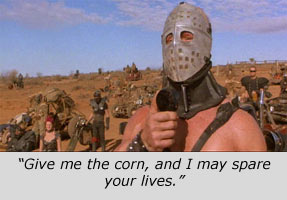 Now depending on your local bylaws, you’ve probably been disarmed since birth.  Unless of course you’re a Texan, where every newborn leaves the hospital with several ammunition samples.  I’m in Canada, which means that not only do I not have a gun, but by law I am forbidden to even think about a gun.  For example, all movies imported into Canada are dubbed with people pointing their fingers at one another and shouting “BANG!”. 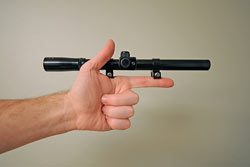 Add insult to injury, I once tried to sell a pair of training foam nunchaku on eBay Canada.  FOAM. My listing was pulled and I got a finger in my face saying “don’t do it again”.  Once again, here we are even forbidden to attack an assailant with Nerf.

So lets assume that the world has gone to heck-in-a-handbasket, yet local authorities still are concerning themselves with now irrelevant criminal codes.   You need a weapon, and you need it right blasted now.  You need something that not only will keep potential garden raiders at bay, you need to scare their still as yet unborn children.

Well, I would have to say this is a weapon of last resort.  Like myself, most systems analysts I know can’t cut an apple without being careful not to nick themselves.  Equip them with a carbon fiber hunting/fighting knife and let’s just say they’ll be dispatched from this mortal realm quickly.  Knives have a good intimidation factor, so depending on how good your poker face is, it may help somewhat.  But if someone calls your bluff, you better hope someone with heavier artillery has your back.

Cons: The last laugh will be you. 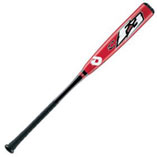 Baseball bats have been used in combat since the crusades.   They’re portable and and come in many styles from lightweight aluminum to classic hickory wood.  The downside of a bat is that is restricted to a small number of assailants.  But then again, if by chance you’re some kind of latent Bruce Lee or better yet, a baseball Mom…you’d be unstoppable.  Just don’t get a cork filled bat, or your batting average will be disallowed.

PROS: Ultimate close combat weapon even for the most clumsy.

This is the everyman weapon.  It’s portable, legal, and infinitely more effective than your foam nunchucks that keep hitting you in the face.  If David was able to drop Goliath with a rather archaic version, today’s modern slings are extremely kickass.  If your skills are high enough, they are good for hunting and of course can land a well placed shot and thus make any gas scavenging road warrior deader than a chicken fried alligator.

Cons: They don’t come in semi-auto or auto.

If by some chance you are in close quarters situation, or just want to have some fun testing the integrity of your Uncle’s pacemaker, you should have a personal taser.  What?  Illegal you say?  Well with a little creativity, you can actually turn a disposable camera into a significant source of electrical pain and anguish.  One of the glories of information available on the internet!  Whether it will be the choice weapon in your urban defense arsenal is hard to say, but it will have a coolness factor beyond measure.

PROS: If it works and you live to tell about it, future generations will sing songs about you.

CONS: Takes time for a subsequent zaps.  So be polite and ask multiple attackers to wait. 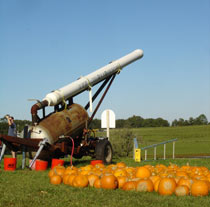 Pumpkin cannons are for the truly well endowed among us men.   Nothing renders even the most hardened wasteland biker into quivering jello like seeing his buddy decapitated by a 15 pound flying squash.  This is the weapon that as boys, we would have shot at everything in sight.  Given enough willpower and tequila shots, a pumpkin cannon can be constructed with enough force to take out a low flying helicopter.  Compared to any other weapon, there’s a psychological factor that only a pumpkin flying at breakneck speeds can inflict on your enemies.  More so than any, this is the weapon you hang steel truck testicles on.

Pros: Unparalleled psychological factor.  Pick off the rape gangs at a safe distance.

Cons: Limited mobility.  Not effective at close combat…unless someone looks inside the barrel, in which case it totally rocks.