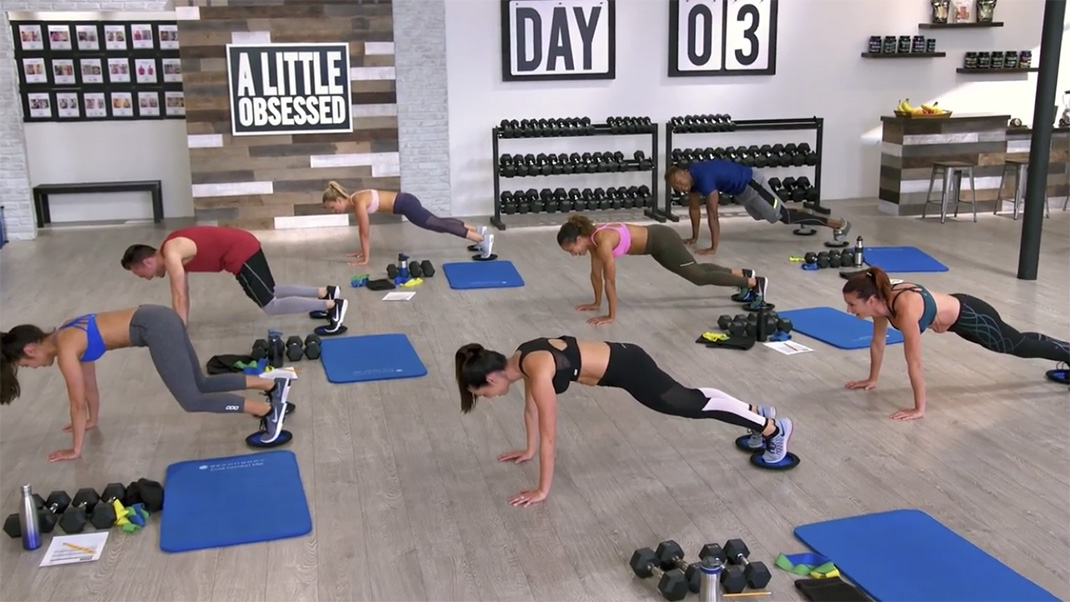 In the advent of the upcoming release of 80 Day Obsession, Autumn Calabrese and Beachbody have released a smaller version aptly named A Little Obsessed.  The program is a simple 5 workout system designed for beginner to intermediate levels with each workout 30 minutes long.  Yes kids, Autumn is indeed back after our fun-packed adventure with Country Heat which inspired average citizens to follow the American dream and dance with reckless abandon at local Pint n’ Pukes.

Try and avoid the cheap yoga mats and get one that has a bit more pad to it since a lot time is spent on the ground using the next required tools.  Resistance loops are used to give simple moves more impact.   Another new item is strength slides that will set you back 30 George Washington’s.  Do your wallet a favor; find a couple ice cream pail lids or Frisbees and get creative is all I can say.

The program is only available via Beachbody on Demand.  Given the increased momentum of the BOD steam-train, I think the writing is on the wall for Beachbody Coaches making a decent side-hustle selling product.  Any day now I expect to see people wearing P90X shirts picking cans in a ditch.

One thing that will be immediately noticed is no music soundtrack and no timer bar.  But don’t be discouraged.  That only opens the opportunity to forego the usual canned tunes and go freaking hardcore with some Engelbert Humperdinck.

If you just can’t cope with the responsibility of making your own playlist, there is a Spotify playlist in the program materials.  I looked the songs over.  Make your own list is all I can say.

Second obvious thing; I suspect Nike is dropping some cash as everyone is sporting shoes with the big ol’ check-mark on them.  I notice this because I am at heart, a shoe freak in need of therapy.  Not that Nike’s are bad by any means as I have several pairs.   Product placement nitpicking aside, it’s not like a Pepsi on the bridge of the Millennium Falcon levels of obvious.

This workout feels a bit disjointed as several moves have little to nothing to do with core.  For example, tricep kickbacks felt very out of place in the middle of crunches.  A bottom bar would also be a nice touch to give the viewer an idea of the next move and time remaining.  Maybe this was a technical feat back in the early days, but this shouldn’t be a difficult issue anymore.

On a completely inappropriate note, sometimes I wonder if maybe Autumn could cover up Ginger and Mary-Ann a little better just to keep it professional.  Not that I want to go all orthodox on anyone, but I’m sure nobody wants me to man-spread in a kilt either.  Then again, I’m not exactly the king of fitness fashion so you know what, forget I even mentioned it.  Let em’ breathe Autumn!

Ah, a nice sports bra.  See, not so bad right?  I henceforth promise I shall mention it no more, so you SJW bridge-trolls can back away from your failure stained keyboards.

I’ve got two things to say about this workout.  First, it is hands down one of the most effectively targeted thirty minutes spent attacking the backside.  Weights are appropriate and moves are awesome.  So if you want to deflect 9mm slugs off the rump like a Kryptonian bikini model then this is the deal.  Lots of leg lifts and squats get the business done.

Getting the wretched things re-positioned fast enough to perform the next move without getting them jammed in shoes like rouge packing tape is a serious pain.   If you have no issues with loop bands then this will rock your world.  Personally I loathe them if you haven’t’ already guessed.

Abs, Arms and ass-umptions?  This one is a bit strange as I don’t generally associate these three in the same workout outside a total body routine.  Also, we just did Booty the day before, so this would have been much better if it went AA instead of AAA.

Presses and rows will dominate the arm section with pretty much no bicep/tricep action.  The sliding plates are also used to add extra work to lying down leg moves.

Running, jumping jacks, skipping and a little low impact plyo.  There’s also some leg lifts using loop bands thrown in and plank work.  It’s a solid cardio half hour.  It doesn’t aspire to the levels of Max 30 by any means, but should satisfy most people.

I hope the rear has recovered somewhat over the last couple days because it’s about to get another beat-down.  Unlike the other videos in this series, this one feels like it means a lot more business.  So much so that this could almost be a Body Beast level leg workout.

Take away the strength plates, up the weight a little and few would walk away from this workout saying it was easy.

There’s a contrasting philosophy with workouts released via BOD and those available by the company on DVD.  While technically good, A Little Obsessed has a made-for-TV-movie feel to its overall production.  Music and timer bars are left out, and I get the impression that this was a quick post-80 Day Obsession project that was thrown together to utilize the same set.  It’s along the same lines as Shaun Week and A Week of Hard Labor, but with even less post-production.

Autumn is a proficient trainer to be sure and clearly knows her stuff.  She does talk a lot, and by that I mean she does not stop for even one-half second.  That’s not hyperbole, I checked.  Again, some will appreciate the micro-explanations.  I was hoping someone would feed her a spoonful of peanut butter so she’d give my ears a rest.

Demographically women in general will find this more in line with their tastes than men.  Workouts are core-centric and weights never go beyond medium intensity with the exception of Legs.  Arms are effectively given only minimal attention in comparison and I’ve noticed this same deficiency with Autumn’s other programs.  I completed a few days of Sagi’s BOD Exclusives prior, and it was a stark change going from a room of iron-crushing muscle monsters to dudes that have more in common with neutered tomcats.  The workouts reflect this too as while general fitness will be maintained, I don’t see how any true gains can be achieved without introducing a hybrid schedule into the mix.  Thus this is more of a fat loss program than a muscle gain one.

The tools used can be frustrating, especially for backwards old bastards like myself.  The strength slides are certain to wind up in a thrift shop and the resistance loops may well try your patience.  After years of workouts and scores of equipment trials, I just haven’t seen anything beat good old weights and a pull-up bar.

In total I give A Little Obsessed 3.5 Feathers out of 5.  While a decent week-long core workout, it doesn’t really deliver beyond a intermediate level and cuts too many corners while doing so.  I would say go for the week it takes to complete, but I’d be surprised if many would repeat the series given the multitude of online options available to them.  It will be interesting to see if 80 Day Obsession gives more attention to the upper body, thus giving this experiment a more rounded focus.

Autumn delivers some solid gems like ‘Legs’. Most of the focus is in the lower body and core with arms getting minimal attention. While great for fat loss, anyone wishing to develop some muscle will absolutely need to hybrid this series.

The Legs workout is a killer

No music or progress bar

Specialized equipment is a bit gimmicky