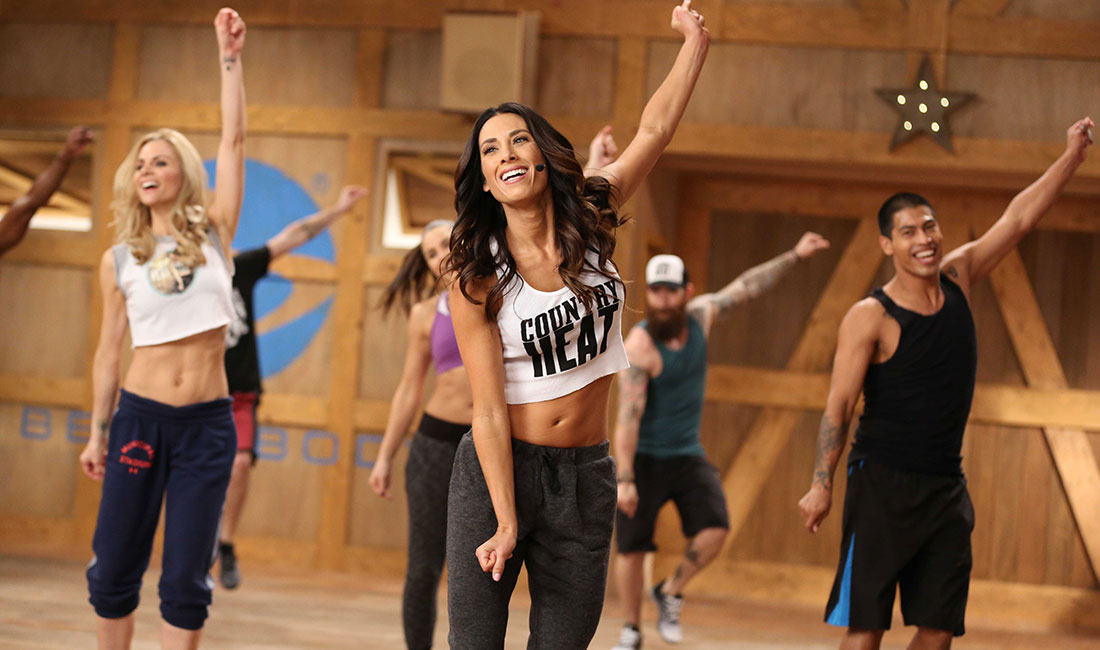 There are some days you just don’t want to do this job.  With that chipper introduction, I would like you to share my review of Autumn Calabrese and Beachbody’s new workout series, Country Heat.  It would appear Beachbody saw the success of CIZE and sought to break into the untapped potential of the blossoming redneck market.

My first exposure was of course, a YouTube trailer which had a level of cringe-worthiness on par with the Star Wars Holiday Special.  I would be lying if I didn’t confess that I died a little inside knowing I would have to submit my physical temple to the “abomination of desolation” that is country dancing.  Yet that day has finally come.

DISCLAIMER: In all fairness to Autumn and Beachbody, I have to state outright that I am not the target audience for this product.  Indeed, I put country dancing right up there with colon rectal surgery.  Therefore, the following review needs to be interpreted in that light.

Sadly, I got a box in the mail with Country Heat plastered all over the exterior.  This is as embarrassing as Uncle Pete’s Discount Sex Toy Emporium using their full return address on their packaging.  Or so I’m told.

The price is roughly $75 and a majority of your remaining dignity.  If you don’t have a Stetson and boots, just get some makeup and paint your face.  Either way you’ll look like a clown.

Much like poison ivy, herpes or the Kardashian’s, country dancing evidently doesn’t seem to bother some people.  Still, I have to come clean and confess that I hate mock country culture and even more so the music.  Every Garth, Dwight, and Dieter has the exact same manufactured southern drawl…it is excruciating to my ears.  It’s like if every rock song had vocals mimicking Axle Rose.

Despite common decency, I gave it my best shot to bribe Mrs. Parrot to join me.  After all, she was a country girl herself.  So I played it real cool.  Foot-rubs.  Breakfast in bed.  I even decided not to yell at the kids for a whole solid hour.

When she asked why I was being so nice, I decided my lovely victim was primed for the kill.   As I slowly massaged her bunions in our shag carpet boudoir, I presented Country Heat and asked if she would join me.

What followed should surprise no one.  She just looked at it like I had asked her to make a sex video with Bill Cosby.  Slowly she pushed it away and made her way to the door, closing it behind her.  To her I was no longer the man she married, but rather an inhuman wretch who would dare to ask her to line dance.

But despite the cloud that looms, all is not lost!  The good news is that I shall bring to you my personal experience with Autumn Calabrese’s new fitness series now that my wife has taken the kids and gone to live with her parents for a few weeks.  I just may have to interrupt the review for periodic  dialogue to Mrs. Parrot.

If it’s one thing I’ll credit country poseurs with is their love of booze and by golly I’m feeling the need to raid Uncle Jesse’s liquor cabinet to get through this living nightmare.

The first workout, Country Swing is medium low impact cardio.  Like most line dances and donkey mating rituals, the routine begins with a lot of stepping motions before pelvic work begins.  Unlike CIZE, Autumn takes it to a slower start with less complexity.  Also unlike CIZE, I feel far less likely to increase my “coolness quotient”.

Look honey, I’m a changed man! I can…oh, hello again!  Just getting off the phone with my loving wife who is only too excited for me to continue my review of this hit program.

Giddy Up alternates throughout week one and helped to keep me distracted from the fact my family isn’t returning my calls.  This one seems to have a stronger focus on core work, with pelvic motions reminiscent of Hip Hop Abs.

As expected, Braveheart couldn’t cut through the endless redneck cliches.  Right down to the mechanical bull in the background and moves with names like Honky Tonk Turns and Tumbleweeds…these will serve as constant reminders that this is not Masterpiece Theatre.

Not to be ignored, a Shakeology bar stands in the back like a dead possum on the road.  Beachbody is engaged in relentless marketing, hitting viewers with a subliminal barrage that would have Winston Smith begging for a drink.

Up until now I had no idea such a thing as country hipsters even existed.  I feel poorer for now knowing, and even more so for participating alongside them.  Still, this is a review so the Parrot must go on…

I just want to talk to the kids. Please let me, hello? Hello? Son of a…oh hey, you’re back!  And so is Autumn in Down and Dirty.

The crazy names just keep coming with…ugh…“Hee Haw Step”.  That combined with a country version of “Footloose”, I’m starting to feel this is Autumn’s personal vendetta against me.

I haven’t been drinking…pppphht!  You know what I miss babe?   Your smoking hot boo…hello again Internet!  I  was just hanging up anyway and wanted to discuss Bring the Heat.

This feels to have more quad/glute work.  Moves should start becoming more familiar in some areas so I’m sad to report my progress was improving.  What wasn’t improving was my overall tolerance for redneck cliches.  Over the course of these workouts Autumn shouts out “hey-yup” and other phrases while too often falling into a fake southern drawl.  I suppose I can’t really fault her as that sort of thing comes with the package.

You know what?  I don’t need you!  I’m my own man and can do whatever…no!  Don’t’hang up!  Don’t…good heavens, you people again?  Is my misery entertaining for you?

This feels to be a faster paced workout so co-ordination is going to be challenged once more.  Aside from those elements, it is simply another sequence of dance moves.  I should note that a side effect that may occur at week three is hearing country music in your sleep.

Initially I was under the impression this would be a rest and recovery workout with minimal western insanity.  Sadly it is indeed stretching, just with a dorky hillbilly vibe.  Yes, you will stretch out the joints so all is not lost.  But a better use of your time might be spent working out the kinks while watching Iron Man, which I have to admit doing when this was done.

Honey, I need you!  I take it all back, everything!  I’m in Hell!  Oww…OWWW!!!  I’m in HELL!  And speaking of never-ending torment, we return for our final foray into Dante’s Inferno with Nightcrawler.

This is a short introductory to line dancing, which you’re going to need to know if you want to wear that buckle with pride.  It comes with a breakdown video to slowly get you introduced to the moves which means there is no instruction or talking during the main dance.  The entire crew has raided the casting wardrobe for Brokeback Mountain and Autumn is wearing jeans so tight you’d swear they were painted on.

I don’t really class this one as a workout, more just Autumn and the crew having some fun on the side.  The song is an original made for this workout by some artist who might as well be Reba McEntire’s evil twin considering I am not familiar with the name.

Look folks, I don’t want you to think I’m some kind of uppity Gen X-er who has no respect for good clean dancing fun.  It’s just that for me, western dancing has a certain class about it.  And by that I mean it has none.

Half my sweat was probably from abject fear my family would return home and see me doing this.  CIZE could easily be passed off as a mid-life crisis.  But this could leave honest to goodness mental scars.  Therefore I ask any fathers out there considering this to please…think of the children.

Who is this appealing to:

Women will find this far more appealing than men.  I cannot imagine the average dude crawling out of bed and getting all excited to line dance with the girls.  I mean that quite literally too as sometimes a couple of the female participants look barely out of high school.  Kind of makes one feel a little creepy.

For me Country Heat is what I imagine an alien rectal probe would be like.  An interesting experience, but painful and leaving one hoping for a mind wipe before being released back to civilization.  Yet for the lot of you that love mock-country culture you will no doubt have found your home.  Which puts me in a tough spot…what to give for a fair feather rating?

One one side, it’s well made and the workout is clearly complex and rigorous cardio.  Autumn is a skilled and accomplished dancer/trainer who explains the changing expectations well.  The cast is skilled, albeit their dopey smiles can be off putting at times.  And even though I dislike the genre, the music is well chosen and those who like this style will be more than pleased.  All the building blocks are in place for a solid product.

On the other end of the spectrum, I guess it all comes back to taste and it is here I simply have to get off the horse.  The workouts themselves are powerful cardio but not really inspired beyond that, meaning Country Heat is not in any way a complete fitness solution.  So while I would give this a lower rating based on my personal tastes, I will walk a mile in the other hillbilly’s boot and grudgingly give it a 3.5 Feathers based on high quality and trainer ability.

Now for some marriage counselling…

Strong production values manage to save a highly niche product. Higher appeal to women and most men will generally want to avoid looking like a drunk peacock during their daily workout regimen.

Women who frequent taverns of ill-repute have found their workout program.