Now that Part One is behind us it is safe to say I’m at least half the way ready to ask for a championship match with whoever the reigning goon is at UFC ( honestly, I have no idea.  Is it still Hulk Hogan? ).  So without further delay we return to Mike Dolce and the UFC training centre in Las Vegas, Nevada.

It’s the half-way point, so Mike tells us we’re going to crank it up a bit.  6 rounds, 4 exercise per round x2.  It’s a chest, shoulders triceps, glutes and calves day so I have high expectations whenever strength is the focus of a workout.  Mike says we’re going to start heavy…and then proceeds to pick up 10lb weights for shoulder presses.  Um, ok.

Fear not though as those smaller sizes will do a good enough job this time around especially since many moves are punching with weights or moving them in such a way you probably wouldn’t want to risk it with 25lbs or anything like that.  If you feel the weight is too light, modify to a more stationary posture and pump away.  In my opinion the chest, shoulder and glute focus is good, but the triceps and claves were sort of asking for more.

However, Striker Strength has a good tempo and the lighter weights will more often than not work out very well here.

It’s traps, back, delts, biceps, glutes and as always a little ab-core in 6 rounds/5 moves per round x2.  The lighter weight that Mike generally uses work better here with a few exceptions like bicep curls, some rows and squats.  In those cases drop those ridiculous 10lb-ers and man up.  Thirty seconds per rep moves pretty good and there is lots of room to modify.

I do have a few safety recommendations though.  If you have lower back issues take it easy on the Front Loading Deadlifts and keep the weight light for it.  Also go easy with Hard Pummel as the move involves swinging dumb-bells around and it can be easy to make a sudden connection with your own unsuspecting skull.  But then again, if you truly want the UFC experience then I say throw caution to the wind and see if you have a glass jaw. 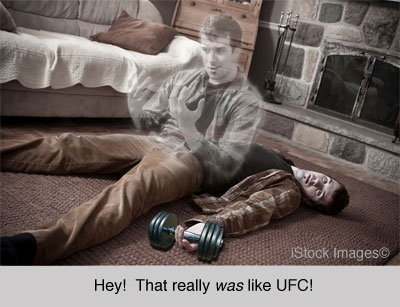 5 rounds/4 moves per round x2 plus a sixty second bonus round of sprawl and brawl.  The first 2 moves are resistance, 1 cardio, and one fight move which feels more like a cool-down.  If you ask me, every move should be like the 60 sec. bonus move.  The resistance moves are great with lots of sweet push-up action.

Like pretty much all of UFC Fit, be sure to adjust your choice of weights accordingly and don’t be too quick to follow the lead of Mike and the cast who often use weights too light for any serious muscle growth.

Nonetheless, Challenger reveals a lot of what makes UFC Fit work with diverse workouts, great music, and a fighter flavor.

5 rounds, 4 moves per round done twice.  Like Challenger the first two are resistance exercises, one cardio, and one fight move.  The fight move is of course there to preserve the justification for having the UFC label on the box.  As I look at the workout schedule, I also see that Challenger and Champion are at times interchangeable.

I have to congratulate both Challenger and Champion for their total body focus and wish many of the other workouts followed the same formula.  Although many times the weights used are waaaaaay too light you fortunately have the option to ramp it up if you modify the moves a bit.  So you guys out there better put those puny 8lb-ers down because no way the guys on this set got those arms lifting aerobic-level weights. 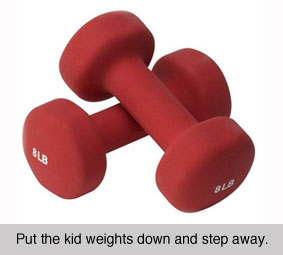 I would say that Ultimate Fit Champion follows in the success of Challenger and is a great total body workout.

I can’t tell you how much I appreciate this workout because my legs and gluteus are toast.  There are no rounds, just a straight to the point stretch that goes after your sore spots in a glorious way.  Most of the attention is spent on the lower body which makes perfect sense considering UFC Fit really goes after the legs.

One thing that I’m a real perfectionist with when it comes to stretch or yoga workouts is proper music tempo.  I’m glad to say that Ultimate Stretch Flex nails it. 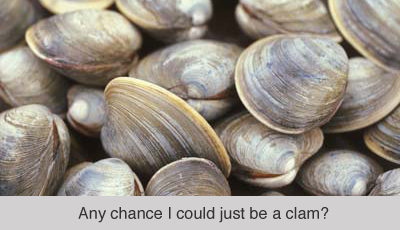 Shark Attack is three rounds with 5 moves per round done twice.  Round one has break-falls, punches and kicks.  Round two is simple kicks and medium intensity cardio.  And Round three is a more worthy finish of sprawls, kicks and other martial arts inspired moves.  Regretfully Shark Attack falls into its own trap of trying to stick to MMA moves instead of other more intense ways to use the time given.  That means a lot of punching and kick combos that feel more like a cooldown than a breakdown.  All of this makes Mike‘s reminder to us that now we know what it’s like to be in a UFC fight, seem less than genuine.

Unfortunately, Shark Attack does not live up to its name as it is an intermediate workout at best where 30 seconds per move just does not cut it.  For a better use of your thirty minutes I’d opt for P90X3 MMX or practically any FOCUS T25 workout. 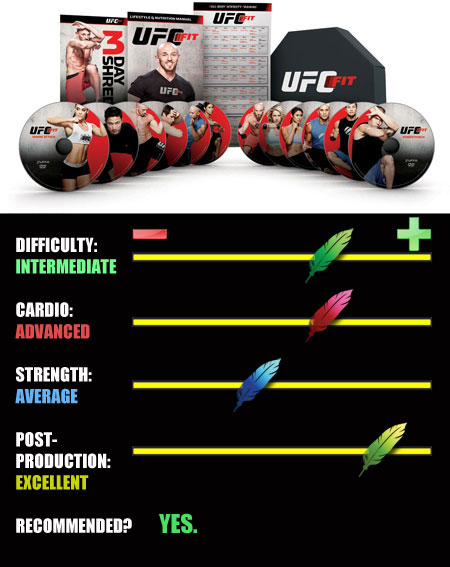 Before we go any further, I’m going to crush all of your dreams right now.  UFC Fit will not make you a fighter and is in no way is similar to actual martial arts training.  To be perfectly honest, I’m more than a little disappointed at many review sites that have the audacity to say it does.  As a fifteen year martial arts veteran myself, I’m going to tell you all right now that a home fitness course will in no way get you ready for the octagon unless your job is the water boy.

If you simply want a high energy cardio program to take you to your limits and MMA means little to you then you might be better served with P90X or Asylum.  And don’t take this the wrong way…but UFC Fit might have more appeal to women than men.  The weighted moves are far more designed for higher reps and will provide no real muscle growth in men, while providing leaner physiques more desired by women.

OK, enough of my complaints…now the good news!  Out of all the MMA style workouts I have reviewed, I would say UFC Fit probably comes out on top.  It’s classier and better put together than Tapout XT, more variety than Rushfit and not as goofy as Les Mills Combat.  Mike Dolce is a trainer you would have a hard time finding fault with as he is never goofy, always serious, and has just the right amount of energy without going over the top.  To top it off, this program has very effective plyometric moves and really works on the fast-twitch muscle fibers.  If you’re one of those people that like the flavour of MMA workouts then my friend, you will indeed have found a home with UFC Fit.