The review of P90X3 Block One was for the most part extremely positive of the new program.  But wow, are there ever a lot of workouts in this program to cover, so let’s get down to business by covering the next round.

Block Two ups the intensity somewhat as weights are incorporated more into the day to day regime and there is a stronger emphasis on “negatives” to get the most out of your 30 minutes.  The transition week remains the same in each cycle. 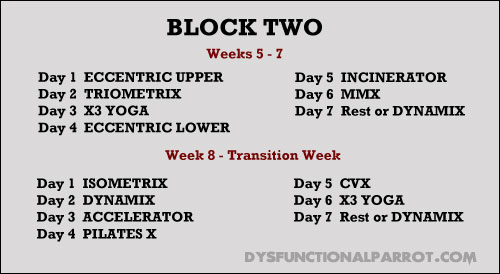 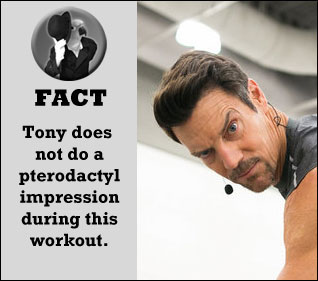 Time under tension is the name of the game today and the point of this is to kill your muscles on the negatives.  That means down slow on the pushups and shooting up.  Shooting up on the pull-ups and going down slow.  So get your mind right because this baby is a killer.

You’ll do 3 moves at a time which include a pull-up, push-up, and a variety of shoulder/triceps/bicep moves.  There is a 30 second break between sets and you are going to need every precious iota of it to scream obscenities at your cat to vent the agony.

I also advise some form of pull-up assist because unless you really rock, doing 10x V-Pull Ups with no assist just seems a little hard for those of us who are not Captain America.

It’s plyometrics revisited.  The idea is 3 levels of intensity per move and no moves repeat.

While many moves in Triometrics are plyometric in nature, I would say this is much less high-impact that Plyo X or X2 Plyocide.  There is more focus on balance which is obvious in such leg busters as Warrior 3 Squats.  Top that off with Hell’s Chair and this becomes a unique way to get your plyometics done in thirty minutes.

There is also a post 30 minute cool-down for about 4 minutes.  I recommend not skipping it.

Down for a slow 4-count then up fast and each move goes for 10 reps.  It’s a “negative” blast on the legs so get ready to grab some weights and rock.

You have to go into this with a few reasonable expectations.  This won’t give you big legs, but rather strong legs…and yes, there is a difference.  Body Beast Bulk Legs for example is designed to get you larger.  Eccentric Lower makes the legs tougher in their core with better balance and reaction time but won’t get you massive like using heavier weights with muscle isolation can.  As you get older many will realize that functional fitness begins to take more precedence over just being big.

I also really have to congratulate the minds behind the music here as it is just plain perfect.  Perfect tempo and perfect mood.  Good music has long been the defining thing in many Beachbody videos that puts them ahead of many lower budget imitators and here is no exception.

The P90X3 Nutrition Guide is probably a bit more complex than most as it is less a precise eating formula and more a philosophy.  Tony does not do calorie counting but instead sticks to portion control by means of a system called ‘Way of the Hand” that measures portions by hand size.  To determine portions, there is a quiz to match your body type and goals to determine the amount of carbs, proteins and fats you should incorporate into your diet.  There is a separate list given for each that give recommended portion sizes for common food items.

The Nutrition Guide has lots of food ideas but not many recipes as Tony assumes you’re smart enough to pull off scrambling eggs.  There are some recipes for spice mixtures to help make dressings and seasonings.  If you are truly lost here though there is also a couple pages on cooking techniques that should at least educate you on which is the hot part of a frying pan.

Probably more so than most guides, take the time to sit down and read this over a period of an hour or so as a quick skim will not yield results.  Or for you guys out there, just hand it to your wife and ask her.  Seems to work for Mr. Parrot.

Resistance followed by  a body weight exercise until failure.  Sounds fun!  The Incinerator is the perfect bookend to The Challenge, although it does go after more than just the chest and back.  This is a total upper body crusher that uses pull-ups, push-ups, rows and curls…each muscle getting double teamed like a WWE steel chair match.

It ends with a Burnout sequence that has the most appropriate music ever.  It sounds like a horror movie and is just very fitting somehow.  And as always, the cast is very capable and certainly buff, in particular Jessica.  Jessica looks like she just came off the set for Mad Max and sports enough tattoos and testosterone to get most men pregnant.  Let me tell you boys, with titanium legs like that, you’re done when she says you’re done.

I’ll let you all in on a little bias I have:  I generally hate MMA style workouts.  Much of that has to do with my long tenure with karate which had the side effect of making me a perfectionist for technique.  That means I was constantly yelling at Wesley’s horrific form throughout P90X Kenpo X, a workout to this day I have shelved in favor of Insanity, Asylum, or even a dedicated MMA workout like Rushfit. 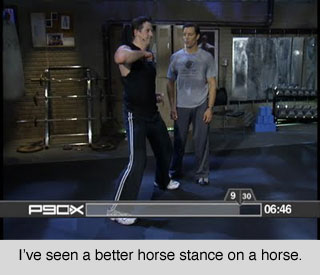 So did MMX tame my savage soul?  Well, the problem with martial arts workouts is that they are not really martial arts, but instead just throwing punches and kicks to look like martial arts.  In other words, it’s just like TaeKwonDo.  So I was prepared to hate this.  I wanted to hate this.  But something weird happened.

I actually liked it.

First off, unlike Tapout XT2, the cast here has done this before and are not a confused motley crew.  In fact, they are amazingly skilled as all three are skilled martial artists, especially Alice who does a crescent kick that could take the head off RoboCop .  Alice sports a “Sarah Connor T2” look and could personally snap the necks off the entire Tapout XT2 cast.  She’s also a black belt in Taekwondo and a stuntwoman so that means she’s probably going to kill me for that last TKD comment I just made.

I used to think Pilates was for little old ladies and burned out school teachers.  Yes, as you may guess my previous knowledge of this form of fitness is somewhat limited.

Rumor has it Tony wanted to put a Pilates disk in the original P90X, but it lost out in favor of yoga.  Now he gets his wish.  While having many similar benefits of yoga, the two are not very alike at all.  Pilates is heavy core, back and spine work that moves around more whereas yoga is more isometric.

On an less than serious note, there is a weird scene where Tony gets the girls ( Stephanie and Shauna ) to wink at each other.  The dirty old man in me really wants to take advantage of that comedic opportunity but my wife is standing behind me with a wooden spoon.  Maybe the girls know something I don’t. 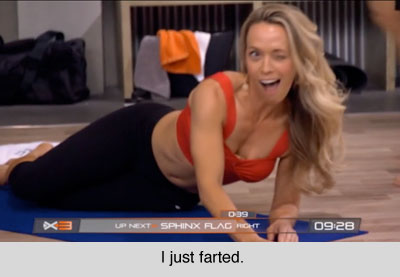 Lots of postures are going to somewhat unnatural at first because many movements will simply put you off balance.  Especially aptly named ones like “Pretzel” and “Scissor Side Plank”.  After this I would rate my performance as somewhere between a brick and a complaining toddler, which is all the more reason I need to return to this again.  Pilates is a solid workout and even doubles as your Ab-Ripper for the day.

Just when you think a man couldn’t have any more ideas for fitness, he does it again.  Tony manages to bring yet even more to the table with P90X3.  The Eccentric workouts pull off a whole new way get fried and MMX / Accelerator are two cardio routines that not only don’t suck…they surprisingly are very good.  And even tough Tony says Pilates is NOT EVER to replace yoga, I’m going to trade it off occasionally because deep down inside I’m a true rebel who plays by his own rules. 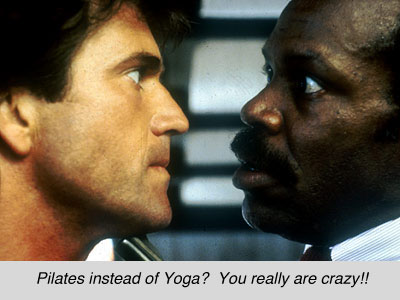 But hold on to your loins kids, the final instalment of the P90X3 review reveals the last workouts ( including BONUS DISKS! ) and presents the question asked since the universe was born…what rating will The Dysfunctional Parrot give this program?

Return to P90X3 REVIEW: PART ONE