I’d like to think that as an international writing sensation I would be the perfect tour guide for all things cyber-space.   So by all means look to me as your own personal Indiana Jones, Obi Wan Kenobi, or maybe even an apathetic SeaWorld guide when it comes to Internet awareness.

Like many of you I know someone who when it comes to being online has less common sense than flatbread.  The consequences of such poor decisions regularly swing back to smash that person right in the face like a vengeful boomerang.  So how can you avoid having your life merely serve as a bad example to others?  You listen to me, that’s how.

Truth is kids, there is more to Internet safety than just having a password more complicated than 12345 ( you lazy dopes deserve every ounce of your consequences ).   More specifically, online you are often your own worst enemy.  So before you post more of your dirty laundry for all the world to see, just remember…

5. The Internet hates you.  Specifically, you.

I don’t mean this sarcastically.  The Internet is a sentient being that hates you in a very personal way and is looking in your window right now.  Did you think someone was there when you opened your eyes in the shower?  That was the Internet.  Much like a scorned lover or a disillusioned Miley Cyrus fan, the Internet desires your destruction for one sole purpose…to get more clicks.  Is there a picture of you passed out in Disneyworld, covered in your own vomit from the roller-coaster?  That’s solid gold worthy of its own Wikipedia page.

Because of this abject hatred that burns with the fire of a thousand suns, you should also know…

4. The Internet is permanent.

Nine years ago I asked a question on a tech forum on what would be the best way to reconfigure the drive structure for a Linux firewall while still maintaining integrity of the swap-partition.  I know…pretty darn obvious right? But to this day that question is out there as a reminder just how green I was and I must accept that my children will also bear my shame for years to come.

The point is, there is no big undo button for the Internet.  Doctor Who is not going to show up in a time machine and erase all your bad decisions with the joy of British wit and then take you on a grand adventure.  Yet sadly the Internet has fostered an attitude of extremely short term thinking resulting in images sure to thwart many long term job prospects.  Most young people will learn this hard lesson in the upcoming years of their lives.  Enjoy taking and sending pictures of your own genitalia?  Might as well print out an extra copy and stamp it on your resume cover letter to save your employer the surprise when they look your name up online.

Let’s take the top search engine out there who like Lord Voldemort, shall not be named.  Let me tell you a secret about Mr. G…he wants to know everything about you. EV. ERY. THING.  And no, he will not erase this information because why would he want to?  Chances are he also knows the exact time you go to work, when you stop by Starbucks, go to gym and finally go to bed.   If by chance you also own those stupid G-glasses then please list your address so I can come to your house and punch you square in your smug hipster face with a brass knuckle forged together with iPhone parts.  With a psychological profile most governments would kill for, I wouldn’t be shocked if Big G knew what you were wearing right now.

3. Never use your real name. Never.

The only reason you should have your real name out there is if you’re famous for saving a runaway bus full of nuns and kittens from falling off a bridge.  Otherwise, fame on the web is a potential death blow to your future employment opportunities. 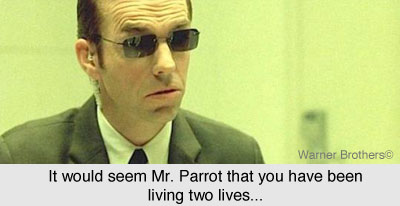 As some of you might know, I go by a few different names out there.  One of them for here where I have fun reviewing stuff and insulting martial artists, and another for a novel.  None of them even remotely close to my real name.  Now I’m not saying you need to get all crazy and choose pseudonyms like Intercontinental Buttocks or Dick Hymen ( get it? Dick and…ah forget it. ), but at least be a nice little dimwit and remove your last name from the mix.  Many have learned this the hard way or worse…haven’t learned a blasted thing at all.  Need an example?  I present  Exhibit A: Jay Maynard aka. Tron Guy. 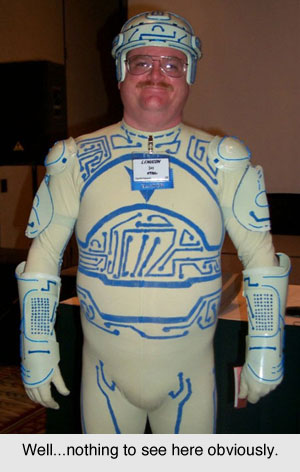 Tron Guy is what happens when a disconnection with reality gets on a soapbox and nobody is there to stop it.  Tron Guy can only draw out of us a collective face-palm because you can only laugh at a 40+ year old overweight single man dressed in painted white lycra and a hockey helmet so long before you start to feel guilty.  Tron Guy takes all 5 points in this article and amplifies them to such a degree I’m surprised the net itself can even still function.  And finally, Tron Guy is what happens when you don’t understand that people are not laughing WITH you, but rather AT you.  Die hard Trekkies look at Tron Guy and can only repent of their geekish ways by torching their Shatner toupees like a 60’s bra burning.

So go ahead.  Type in one of my pseudonyms and you’ll get some other guy who kind of looks like me but obviously can’t be…right?  Type in my real name and you’ll be treated to a feast of pure nothingness.  Except that damn Linux question.  Oh, I can hardly bear it anymore.

2. The Internet loves failure.  Especially yours.

Are you a big success in life?  Better keep that positive mojo to yourself because in the infamous words of the Green Goblin, “the only thing people love more than a hero is to watch one fall.”.   Internet surfers are like drivers.  You put them behind the wheel of a computer and they go from nice-guy to an insufferable AC/DC listening troll with brass testicles hanging from their PC’s.  These “people” love it when others fall from glory because it validates in their own small lives the reasons they themselves never went anywhere.  Misery loves company and if you don’t believe me then hang out in a Reddit forum for five minutes. 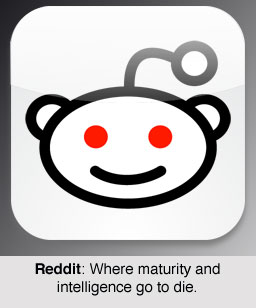 I hear you.  We all want the net to be a happy place like the bar in Cheers.  We log in and Norm is there to shoot the breeze over a pint while the whimsical advice from Fraser Crane helps Sam cope with his love affair for his own hair.  Sign me up!  Wait…it’s not like that?  Oh.

Give the net an inch and it will take a mile to drag you through the town, tied to the back of a motorcycle driven by a leather clad squirrel.  Your idiocy is the lifeblood that fuels it’s engine.  There’s a reason legitimate celebrities ( ex. The Queen ) have PR managers who post on Twitter and Facebook on their behalf:  They themselves barely have enough energy to loathe you let alone care about what you think.  Can you imagine if Gweneth Paltrow accidentally tweeted a middle income black person?  Her world would come apart.  HOWEVER…

Pseudo-celebrities like the Kardashian’s ( for the longest time I thought that was a Star Trek alien.  I was only half wrong ) thrive on even the worst form of attention which is a good example of two kinds of success.  One that cares not about the thoughts of the people ( think Ghandi, Steve Jobs , mom ) and as such does not try to impress them with their own worthless accomplishments, and the latter which is so desperate for 15 minutes of fame ( Lady Gaga, “Reality” TV, your mom )  that their chances of a well-adjusted future are more cooked than a chicken fried alligator.

Remember the 80’s when girls hair looked like a firecracker went off in their skull and boys had mullets so horrid that the immortal soul of Richard Dean Anderson will scream for all eternity?  Good thing we had 35mm film and not digital cameras back then, am I right?  Now imagine all those pictures online for everyone to see and forever laugh at your poor choice in Adidas fashion.  A good rule of thumb is that today’s fashion hit is tomorrows catchy Halloween costume.

But fashion aside, what is mentally wrong with you ladies out there?  You know who I’m talking about…the one who poses for their own damn camera sporting mega-cleavage and then posts it online???  Seriously, what kind of daddy issues do you have that you are so desperate for this lowest form of attention?  The rampant amount of “selfie” pictures flooding the net is enough to make a psychiatrist puke in his Lexus.

Yes, there is a large section of men that do this do.  We call them by their scientific name: Douchebagus Maximus.  But in all fairness the men to women ratio is so one sided I really have to question what has happened in society to make you ladies so desperate for attention from skinny white guys with fake tans who take selfies of themselves doing “gangsta” poses.  I’m honestly surprised more of you don’t just become nuns.

If you simply MUST put a picture of yourself out there then be sure you’re wearing something you would wear at a job interview so at least try and stuff your hooters back in their blouse ( use duct tape if necessary ).   The more boring attire you can cover yourself in the better because make no mistake this will come back to haunt you otherwise.  Better yet, use Photoshop and replace your head with a fish, a chicken, or as is often my case, a Sun Conure parrot.  My rock hard chiseled abs could belong to anyone but people at work will never know.  Unless of course if I take my shirt off at work.  But then I think I have bigger issues to deal with at that point.

Finally, if none of this article makes sense just go back to Tron Guy.  Then get on your knees and thank the Almighty Creator that no matter what mistakes you have made online, you are at least not him.