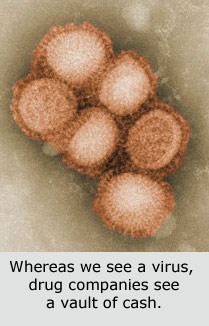 Whether the shortage of H1N1 vaccine is real or artificial, the ultimate outcome is still good for the drug companies.  People begin to “panic buy”, and demand increases. Cha-ching.

The simple psychology of it all is fascinating.  The easiest way to make everyone want something its to create a shortage ( or at least take advantage of it ) and then have the audacity to tell them they must wait.  It likens me to a time when parents were climbing over each other to get a Cabbage Patch Kid at 5x retail price, only to have them readily available a short time later at a substantial discount.  For you younger viewers, think Playstation 3.

Thus we have people acting like Arnold Shwarzenegger in “Jingle All the Way” fighting for the last H1N1 flu shot as if their very lives depended on it.  Problem is, the media is telling them that very thing.

My wife had a good laugh as she saw lineups wrapped around buildings of elderly folks camping out in lawn chairs in sub-zero temperatures desperate to get their H1N1 shot.  Half of them will likely die of pneumonia!

A few weeks back me, my family and many co-workers were dropped with a nasty flu.  It is quite likely that we had H1N1 seeing as it making it’s way around these parts.  I took a couple days off work, relaxed, read a book and was able to get back in the saddle after some rest.  Another touchdown for the immune-system!

Look, if you’re 85 years old and fear a stiff wind then maybe a flu shot isn’t such a bad idea considering your shaky constitution.  But when average people who are in at the very least “acceptable” physical condition are complaining to health care authorities that they should be able to “handle this panic better”, then I must shake my head in a little disgust.

Once this flu has passed, be prepared for the next big scare.  Global warming, terrorism, nuclear Iran, a new Brittany Spears album…there are plenty of things to be afraid of.  Just don’t take on more than you can handle!