Hey, I’ll readily admit that I’m probably the most complex eater in my neighborhood ( kosher lacto-oval-vegetarian.  Top THAT. ).  But even I know when to keep my dietary obscurities to myself.  PETA however, digs controversy on a level few of us mortals can understand.

According to PETA, Eliza Dushku has the soul of a flesh-eating, cannibalistic serial killer.  Either way, that sounds like an idea for my kind of movie.

In its latest bulletin, the animal-rights group PETA fume that the star of Fox’s “Dollhouse” ( never seen it ) was “bragging on ‘Jimmy Kimmel Live’ ( never seen him either ) about hunting deer, elk and other defenseless ungulates. While the audience reacted in horror, Dushku attempted to defend herself by saying that it’s OK for her to hunt because she eats those she kills. Says PETA, “Eliza, please meet Jeffrey Dahmer. He ate those he killed, too.”

PETA aside, I’m a little stunned at the ignorant hypocrisy of the audience.  While I hate hunting with every ounce of my being, I’m not so naive enough to think that it is unethical.  Animals are not people, and are not equal to people.  Until Rover can pick up his own turd in a plastic baggy, I think it’s safe to say who’s in charge here.

For example…take the common cow.  Ol’ Bessy could only dream of getting a nice clean shot to the skull with a 306.  Nope, instead she has to settle for the booby prize of a stun gun to the head at the slaughter house.  All so everyone in the audience can have a Happy Meal after the show.

Now, that having been said, I’m not anti-meat…just anti-factory farm.  Buy local, buy organic, and you’ll do a lot to help solve much injustice in today’s food supply.

Although I may have similar eating habits to members of PETA, I think it’s safe to say our overall philosophy couldn’t be more different 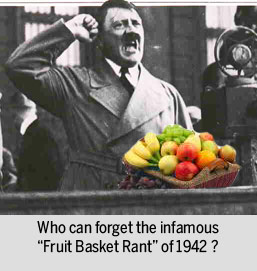 .  Comparing people to cannibals because they have a chicken-kabob transcends stupidity. I don’t think one can claim moral superiority because they substitute a burger for apples.

But you know who else ate apples?  HITLER! Hell. Yeah.  So you keep on chewing on that fruit there PETA kids.  Because we all know it’s a just a bad day away from eating a fruit salad to sending Jews to a gas chamber.