Not a day goes by where I don’t wonder if Larry, Curly and Moe are not steering the wheel of the once mighty USS America.  Naturally, during these times of real and tangible problems, I seek solutions that cannot exist outside the realm of utter fantasy.  But completely impractical solutions are my promise, and my gift, to the world.

Which got me thinking about all the super-villians who want to rule the world.  Depressingly enough, you have to admit that we’re being governed by characters so shady that everyone on this list would recoil in disgust. 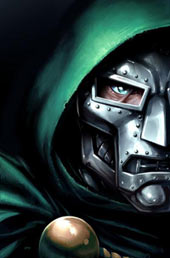 Say what you will, but the infamous Doctor Doom definitely has the upper hand on how to run a country.  Before Doom, Latveria was just a hot dog stand and a retarded donkey.  Now it has become a world class technological hub with zero unemployment and a non-stop Oktoberfest.  In the words of Doom, “they are happy, because I have commanded them to be”.  Holy —-.

Not to mention, Doom has an intellect that goes into the stratosphere, and that bodes well compared to our current politicians who are too mentally challenged to operate a flush toilet.  True, Doom is a totalitarian ruler and at times a bit of a complete dick, but he is always fair and loves his people.  Just try and remember who’s the boss unless you feel like having your innards slowly fried.

In all fairness to the Dark Lord of the Sith, what did Vader really do that was all that bad?  Kill a few incompetent Imperial lackeys?  Maybe we’d have more responsible government if our leaders took less kickbacks and snuffed a few more political grease-balls.  And don’t give me the song and dance about Obi Wan.  Dang old idiot walked right into a restricted area and threatened the supervisor with a weapon.

Despite Vader’s unwarranted bad reputation, we should consider this: the man is all about efficiency and order.  Terrorists trying to steal plans for a Battlestation whose only goal is to keep the peace?  Then you raid that ship and find those Droids of Mass Destruction damnit!! Personally I can’t blame the guy for taking matters into his own hands when a legion of Storm Troopers can be defeated by freaking teddy bears.  I mean really…Stevie Wonder has better aim with a rifle. 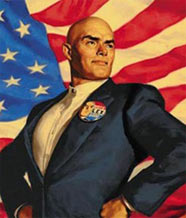 Any guy who can go toe-to-toe with the Last Son of Krypton is obviously not a complete dumbass.  In fact, Luthor has already been President of the United States in the DC Universe and did a bang up job of it.  And that kind of experience is good on any resume.

Perhaps better known as KHAAAAANNNNN.  Khan Noonien Singh was a genetically engineered human who fled into space during the Eugenics Wars in 1996.  Never heard of the Eugenics Wars?  That’s because our education system sucks my friend. 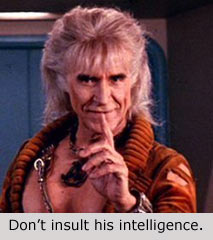 Like any enhanced human, one day you just realize that it’s time to take over the reigns of power from the currently ruling genetic earthworms.  And although Khan has a tendency to be crazier than a pet raccoon with severe obsessive compulsive disorder, he’s a man of vision and does not deviate from his course of action.  Ever. That kind of selfless perseverance is in short supply with our current crop of political milk-duds.  His only downside is apparently 2-dimensional thinking, but that still puts him 2 dimensions above the current administration. 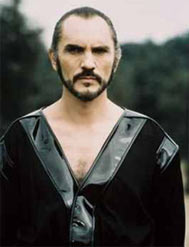 I can respect a guy who has little time for kissing up to big corporations for campaign money and selling out his virtues for a paycheck, but instead simply walks flies into the White House and makes the current president wet himself like a toddler on a tequila drip.  Zod suffers fools for somewhere between none and zero seconds and much prefers to dish out his own brand of justice by his own hand.  And let me tell you, when a super-powered indestructible Kryptonian dishes out punishment, your grandkids will feel it.

I guess the only downside is that some killjoy who may or may not go by the name of Kal-El ( damn you Nicolas Cage ), would try and defeat Zod and bring back the same tired America of injustice for all.  But assuming that doesn’t happen in our new reality, then take joy!  You too will one day kneel before Zod.  You, and your heirs!!!!