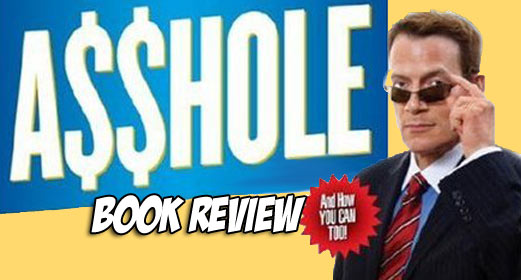 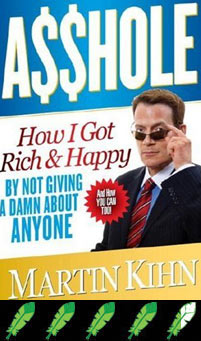 Perhaps a more appropriate title would be “How to Gain the World Yet Forfeit Your Soul”!  Let’s face it kids, how many Christian sites do you know that would review a book called A$$hole?  I’m guessing not many.

But such was the winds of fate when a co-worker dropped this one on my desk. He may have been trying to say I could use some work on assertiveness, or maybe was thinking I would be a kindred spirit with the author.  So I’m not sure if I should say “thank you” or “bite me”.

The story is the journey of the author, Martin Kihn.  “Marty” starts out as the worst kind of person…a nice guy.  Always being passed over for promotion, ignored by his own dog, a pushover in life…your low end Beta-Male if ever there was one.

When an opportunity at work that involves promotion on packing your desk up and leaving comes up at work, Marty needs a plan.  No, Marty needs a personality transplant.  And thus the adventure begins.

What I love about A$$hole is the way it destroys modern pop-psychology that in my opinion, and the authors, is nothing more than a self-indulging and whiny victim creating machine.  Marty starts off with help groups, but the book takes a monumentously hysterical tone when he has the ultimate idea…an acting instructor named Al who reminds me of Gary Busey after a bad nights sleep.  Or for that matter, Gary Busey under any circumstances.

So Martin makes the transformation from nice guy to rule-breaking, order giving, power-mongering, chip on the shoulder wielding, well…a$$hole.  His “homework” is a true sign of just how serious the author is!  Man, if we could replace today’s shrinks with clones of his insane acting instructor, we’d be one serious society of go-getters!

So what’s the moral of the story? At the end the author discovers that being assertive is good, but being a butt-headed contrarianist is not without it’s downside.  I’m sure Captain Bligh was a complete a-hole too, which was the cause of his mutiny.  Thus Martin discovers his inner total a-hole, yet remains true to his original virtues of respect and in doing so finds the balance that gives him true success.

I’m sure many of us could use a little boost when it comes to being assertive.  While I don’t consider myself a alpha-male, it is obvious that I’m not a complete beta either.  In fact, halfway through the book I went for a run to the grocery store and encountered a somewhat rude individual who felt I had somehow gotten in their way and was getting all, like, up my face about it, yo.  So I responded, “save that alpha-male crap for someone who’d be impressed”.  Then I went through his grocery cart and helped myself to some items.  Problem instantly gone!  I have no idea where that came from, but I kind of enjoyed it.  Could it be that being a a$$hole is like heroin?

A$$hole is a rare look into what makes an alpha-male.  The top dog.  The head honcho.  The big cheese.  Aside from the possibly offensive title, it is a brilliant look into how we as a society respond to our hierarchies.  I would recommend this book to anyone studying Sociology, Psychology, or just plain wants to have a good laugh!