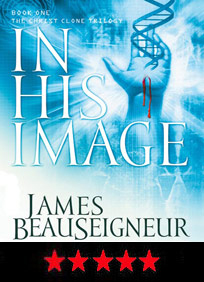 Take some DNA from the Shroud of Turin and what do you get?  It would seem a really awesome end-time series thanks to James Beauseigneur!  Finally!

The book tells the tale of Decker Hawthorne, a journalist and the main character of the series.  He is not a Christian believer, and thus we avoid the completely unrealistic stereotype in other books that portray followers of Christ as having a fascinating dearth of any real flaws.  Through a chain of events, Decker becomes a caregiver to Christopher Goodman, the “Christ Clone”.

The Christ Clone Trilogy is as one would guess, three books: “In His Image”, “Birth of an Age”, and “Acts of God”.  The series reads more like a Tom Clancy novel without all the eye-rolling dialogue that plagues the Left Behind series.  There’s even the odd…gasp…swear word!  I may be a church every Sunday, sabbath observing, kosher-hippie…but if a comet is heading for me, I’d be letting a few colorful metaphors cut loose.  Of that I have little doubt.

Oh, and one more thing…it’s not classic pre-tribulationist.

It’s not even mid-trib, post, pre-wrath, or even amillennial.  Stick THAT in your creative pipe and smoke it boys!  In fact, it wasn’t until later on in the series that I realized that I missed the “rapture” entirely due to the authors creative interpretation.  Sort of a slap in the forehead “shoulda had a V8” moment.

I hate to keep referring to Tim LaHaye, so I apologize in advance.  It’s just that for too long the Left Behind series has been considered the MOST LIKELY way it could all go down.   People, I don’t profess to know it all about eschatology, but I can promise you all this…it will NOT go down like LayHaye describes.  I can guarantee it.  So please, open yourselves to other possibilities!

James Beauseigneur gives end-times fiction a fresh, creative, and often unsettling scenario.  Instead of the things happening “just because” like other series, the author gets wildly creative in interpreting Biblical prophecy.

Well, about freaking time is all I can say to that.

This anti-Christ is, shall we say, one bad mutha.  But what makes him more frightening and less a comical dork like LaHaye’s or Van Kampen’s “Nicolae” is his motives.   Nicolae ( in both ) was a half-wit who couldn’t find his demonic backside with both hands.  As Robert Downey Jr. would say, Nicolae was “full retard”. 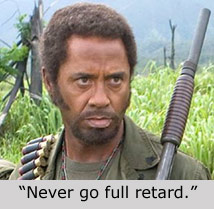 But this guy has a plan.  This scenario shows anti-Christ as calculated, smart, and completely in charge.  I also got a kick out of when the comet came by earth.  It incinerated my neighborhood and province, so it was nice to be noticed.  I think. Yet I suppose considering the state of my retirement savings, being reduced to ash beats having my swan song in a discount seniors home.

The series was originally published in 1998, and is still a good read.  People, if you’re sick to death of stories about piles of empty laundry and sneakers being “left behind”, then you may want to be good to yourself and give the Christ Clone Trilogy a read.

REVISED RATING: I went back and read this again recently.  I liked it more the second time around, so I simply must give this a 5 out of 5 star rating, up from my previous 4.5.  There you go James…you got your half star back after all!