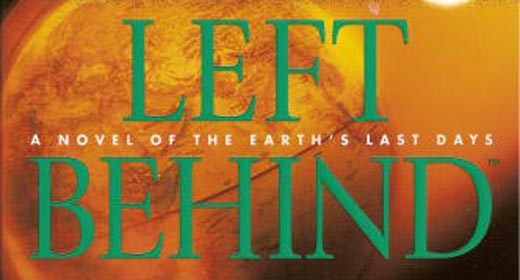 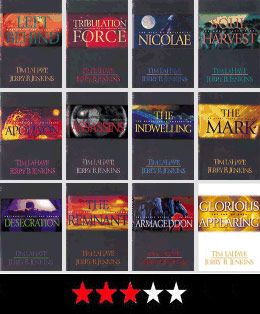 After the deflating letdown of “The Fourth Reich”, I once again ventured into the waters of end-times fiction.  This time it was the Left Behind series with best selling authors Tim LaHaye and Jerry Jenkins.

The Left Behind series has unfortunately degraded into a curious franchise of movies, spinoffs, video games, comics, t-shirts and probably bed covers with matching pillow cases eerily reminiscent of Star Wars ( or perhaps rather Space Balls? ).  Yet for the sake of this review I’ll stick with the original 13 book series.

The story is about the events immediately following the aftermath of the pre-tribulationist concept of “the rapture”.  It takes us through the interweaving stories of a pilot, a reporter, a pastor.  Many other characters are introduced as the series moves along and subsequently exterminated in ever creative fashions.

The first book is all well and good, while the second is more buildup.  The third book, “Nicolae” is by far the best of the bunch due to its political intrigue.  I’m not sure what it is with Anti-Christ figures and the name “Nicolae”, but I suggest all you good parents be suspicious of little Nicki and to inspect him for any 666 birthmarks.  I’m just saying. 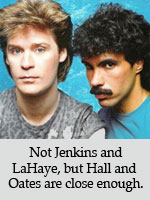 From books 4 on, it quickly spirals into drudgery.  It’s like Hall and Oates music: you’ll listen to it on the radio, maybe even tap your fingers…but it’s otherwise not memorable and simply an empty experience.  Not bad, just not good. OK, let’s put it this way…I can summarize each book after “Nicolae” by the following dialogue:

Buck: Hey, our friend Joe just got shot through the head.  Y’know, this reminds me of John 3:16.

Tsion: Yes Buck, and we must inform the world on the Internet because people always look to the internet for religious guidance.

Buck gave a grim look, because he knew many more of them would die in the days ahead.  But he was cool with that.

Look folks, I’m as evangelical as they come, so I have to wonder…do any of us REALLY talk like this??  Maybe I need to broaden my social network.  Or maybe I’m better off leaving well enough alone.

What begins as entertaining fiction begins to take itself way, way too seriously.  The characters turn into cardboard-cutouts going through very predictable hoops.  And the Anti-Christ…oh man…

OK, here’s the deal.  I expect the Anti-Christ be somewhat more intelligent than, say, your average NASCAR viewer.  Nicolae begins as a rising star but becomes strikingly similar to Wile E. Coyote chasing the Christian Road Runner.  This guy in reality couldn’t get elected to the city council of Moose Jaw, Saskatchewan let alone have all the leaders of the world give him their power, so it seriously lacks believability. 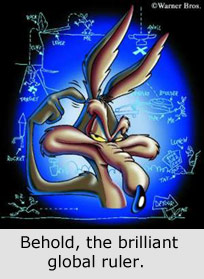 Come near the end of the series, Nicolae becomes such a cartoonish political figure I half expected him to roll out an ACME guillotine while writhing his hands.   As a reader you don’t want him to meet his demise because he’s evil.  You want it because he’s a freaking idiot.

And Jesus, well…he’s very…( looking for the right words )…Baptist.

I don’t envy an author who must try and do justice to adding Jesus in a novel.   Unfortunately, Jesus comes off like an actor stealing his own lines.  Here is where LaHaye and Jenkins drop the ball.  The authors forget that they are writing FICTION, and instead feel they must “stick to the script” and not deviate from the acceptable evangelical norm.

Truly good books take artistic license. Unfortunately, the Left Behind series sacrifices creativity and originality and instead seeks more to convince the reader of the pre-tribulationist rapture instead…which I find a shaky theological view at best.  It is often overly preachy, and to any student of Biblical eschatology, is exceedingly predictable.

The books accomplish in 13 what should have been done in 3 or 4.  It rambles on, and you are only along for the ride so you can see the end.  I suggest reading books 1, 3, and 13. There you go, and you’re welcome.

The authors are now making a PREQUEL series…which seems redundant if you ask me considering you KNOW the outcome.  But I guess writers have kids to feed too.

Squeaks by with 3 Stars out of 5. Give it a 4 if you’re a member of the Southern Baptist Convention.

NEXT UP:  The Christ Clone Trilogy by James Beauseigneur…