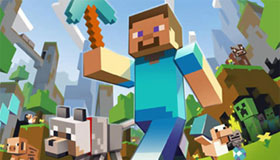 The main problem with being a parent and writing about parental advice is that you generally think your own kids are just so many levels of awesome.  As such my observations may be a bit biased.  But as a married and homeschooling father of four I believe I have learned at the very least, a thing or two about these young Offspring of Mass Destruction. 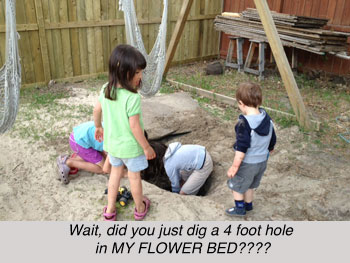 Just to give a little background, I’m a systems analyst and work around the virtual world all day.  I also have a healthy loathing of technology in education and feel it has the opposite of the intended effect on young minds nine tines out of ten which is why we put a man on the moon in the sixties with a slide-rule yet cannot do anything near as innovative now despite having more processing power in our smartphones than all of NASA did back then.  Which brings me to todays topic: Virtual Childhoods.

Take Minecraft for example.  I can’t go five seconds around kids without hearing about it.  The next person who tells me that Minecraft is like Lego I will take every ounce of my karate experience and roundhouse kick them in their pie-hole.  Minecraft is not Lego.  Unless you’re fishing out a Minecraft block from your 1-year old’s diaper then it is nothing like Lego.   Unless you’re trying to make a car with 3 wheels because your insipid little brother insists on making a !$@ unicycle then Minecraft is not Lego.  Lego expands the imagination.  Minecraft is someone sitting on their ass poking a screen while a childhood slowly ticks away.  So any comparisons to a real physical object rightly deserve being spit in the face and hit with a shoe. 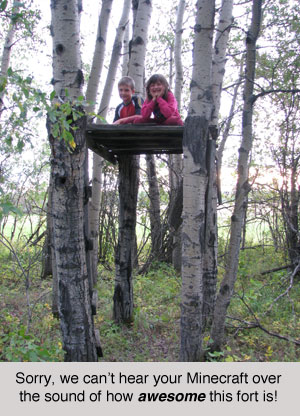 Here’s the problem, at an increasing rate society wants kids to be free and creative…BUT…it wants them to do it quiet, clean, and out of our way.  Sorry.  You can’t have that.  Not without a cost.  Healthy and well adjusted children will an all likelihood, drive you up the wall as they run to and fro from one crazy scheme to the next that…wait, what is my 5 year old doing with a live mouse trap and a jar of my organic peanut butter?? 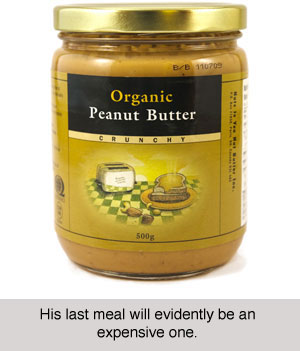 Kids need to be connected with the real, physical world and virtual play is not nor ever will be a viable substitute.  I’m not even just talking about video games.  Social media sites have people of all ages desperately seeking the approval and LIKES of people who seriously don’t matter at all.  You know exactly who I’m talking about…the Facebook person who gets all pissy when not enough of their “friends” like their picture or not enough comment on their one dimensional observations on life.  Such people need their accounts eradicated and their internet connections set on fire for the sake of their own mental health.

How much more so are we passing this obsessive need for approval from strangers down to the next generation?   Even the approval we seek isn’t real.

The tangible, tactile connection with reality should never be switched for the fake replacement of a touchpad and Facebook ‘Like’ is not a substitute for a phone call.  For example, my oldest son has a mission.  To catch a fish.  His main handicap though seems to be his inept father who despite hundreds of dollars in fishing gear, cannot catch jack. 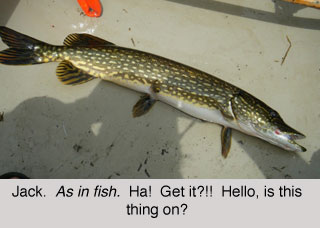 My son mentioned this to another kid who promptly whipped out an iPhone ( Holy %$#@, why are 10-year olds carrying iPhones??? )  and offered a “superior” experience of catching virtual fish in a game instead.  Real fishing after all, involved the effort of going to an actual freaking lake and had the horrific possibility of getting wet or maybe even, Lord forbid, catching a real flapping fish.  Why do that when you could tap a screen in the comfort of your own living room?  Much to my pride, my son looked at the kid like he was made of Grade A Stupid. 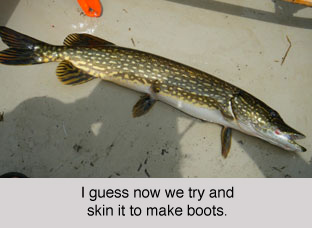 I’m not asking us to disconnect our kids entirely.  Or maybe I am.  Do you have a ten year old with their own computer, iPad, several game consoles, a Facebook account and can personally say they built a replica of Kennedy Space Center on Minecraft?  I recommend looking at this problem like a smoker looks at quitting a 3-pack a day habit.  Cover your child in nicotine patches and have a nice long talk.

And quickly start to wean them off the steady diet of fake.  The real world comes quicker than you think.

Any and all parental advice from the Dysfunctional Parrot should be taken at your own risk as he’s still trying to figure this whole thing out.