I love Mormons.  In fact, if I had to pick an attribute about them that I like the most, it would be that they’re not Jehovah’s Witnesses.

Yesterday while I was doing some front yard work, who should ride up on a couple of bikes but two Mormon “elders” ( maybe 19 years old, tops ).  Naturally, it all starts with the small-talk, and then we both got down to business.

First you need to know some of my background.  Around eight years ago I began studying comparative religions to an almost obsessive level.  Mormonism was one of them.  In fact, I have a copy of the Book of Mormon that I read over and highlighted. I even went down to the Institute of Religion at the University of Alberta ( a Mormon Institute to the core ) and read as much of their literature as I could muster.  Doctrine and Covenants, Pearl of Great Price, you name it.  Dang near broke their photocopier.

So to any Mormon reading this, I’ve done more due diligence than probably anyone you’ve ever met.  Please don’t insult me by insinuating I’m just a big bad “anti-mormon”.  It demeans us both.

My position: The Book of Mormon is not the Word of God, but rather the fabrication of a false prophet: Joseph Smith.  The doctrines of the church such as man becoming a God ( like God apparently did ) are contrary to basic Bible principles ( ex. Isaiah 43:10, Isaiah 44:6 ), and not even in the BofM in the first place.

Their position: Just pray about it.  Seriously…that was their sole defense.  If you want to know truth, just pray for an emotional confirmation.  Don’t concern yourself with thinking.  That will just lead you from the truth and give you a headache. 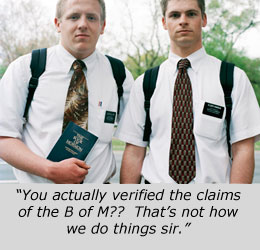 Unsatisfied with the fact I have actually read the book, they could not let this go.  Obviously I didn’t pray hard enough!  I tried explaining the complete dearth of archeological support, manuscript evidence, and even Joseph’s false prophecies regarding polygamy as well as a ton of others.  Yet the Bible, which is thousands of years older, has evidence coming out the wazoo in terms of internal consistency, prophecy, and really…you can’t throw a rock in Israel without hitting a Biblical relic.

The Book or Mormon, with events supposedly occurring much later ( up to AD 400, which might as well be last week in archeological thought ) and in America no less…nothing.   Archeological societies such as the Smithsonian deny any find having any connection with the book whatsoever.  And trust me, the kingdoms described in the B of M are massive kingdoms of gold, silver and…elephants. Yup.  They tried countering with the Mayan/Aztec route, but I wondered if the Aztec tradition of ripping the still beating hearts from people was consistent with Mormon doctrine.  Guess not. Plus, the only “archeologists” making this connection are, you guessed it, Mormons.

Add on top of that, the obvious and indefensible fraud that is the Book of Abraham.  A fraud the LDS Church is VERY much aware of, as they encourage members not to read “anti-Mormon” literature regarding it.  Even Mormon apologists have all but thrown in the towel on that one as it is obviously an Egyptian funeral text, and nothing to do with Abraham.  In other words, Joseph Smith lied about the whole thing. 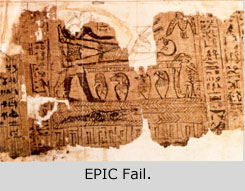 Their second position: Obviously the two sticks mentioned in Ezekiel 37:16-17 are the Bible and the Book of Mormon:
“Son of man, take a stick of wood and write on it, ‘Belonging to Judah and the Israelites associated with him.’ Then take another stick of wood, and write on it, ‘Ephraim’s stick, belonging to Joseph and all the house of Israel associated with him.’ 17 Join them together into one stick so that they will become one in your hand.”

My counter position: Obviously not.  The verse interprets itself if you keep reading in verse 21-22…

“This is what the Sovereign LORD says: I will take the Israelites out of the nations where they have gone. I will gather them from all around and bring them back into their own land.  I will make them one nation in the land, on the mountains of Israel. There will be one king over all of them and they will never again be two nations or be divided into two kingdoms.”

The BofM my foot.  They refer to the divided kingdoms of Israel.  Plain as can be.  When I asked them to check it out, they refused.  So much for the pursuit of truth.

At that point I had to accept that these guys were cult owned robots. Brainwashed. Incapable of free thought. I considered asking them to turn around so I could see if there were an access panel on the back of their skulls that I could open to reveal circuitry. Maybe I could pull the batteries out or hit the reset button.  No such luck.

As always with Mormonism, it’s never a battle of logic, but subjective emotion. It’s not what the Bible says, but what the “prophet” says and how that makes one feel.  Absolutely nowhere in the Bible is that means of confirming truth even hinted at.  Quite the contrary, as the Bereans accepted nothing Paul said without testing him by the Torah first ( Acts 17:10-14 ).  We certainly covered a lot in our nearly 2 hour talk on my front lawn, but we finally parted ways, naturally both convinced of the others delusion!  I was upset that they refused to look in the very Bible they claim to believe, and they at me because I couldn’t work myself into a psychological warm fuzzy that they felt should trump what the Bible clearly says.

But at least we parted with a courteous handshake.  Jehovah’s Witnesses usually try and throw stuff at me!

In the end I thanked God that I was used in such a manner and that maybe…maybe…someday these young men will wake up and see they’ve been fed a huge whopper of a lie from the false prophet Joseph Smith and the Church of Jesus Christ of Latter Day Saints.

NEW: Can you handle the latest article?…BOOK OF MORMON: Something Doesn’t FEEL Right