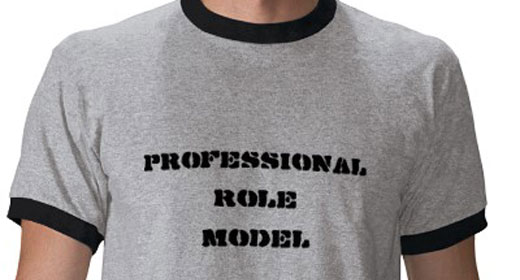 You can’t escape from them.  In the grocery store they stare at you from the gossip rags.  On TV they punch you in the retinas.  And at work there’s always someone at the water cooler who thinks any one of these synthetic human beings is somehow the apex of all things to be strived for.   Which brings me to this weeks subject, 5 Failed Role Models.

I know what you’re thinking.  “Kim’s not a role model!  She’s just a B-Grade attention-whore”.  And God bless you for thinking that you magnificent bastards.  But unfortunately, far, far too many women see this…whatever it is… as a viable role model.  Truth is, if it were not for the assault of magazine covers showing this skanks face, I’d still think Kardasian’s were a race of Star Trek aliens. 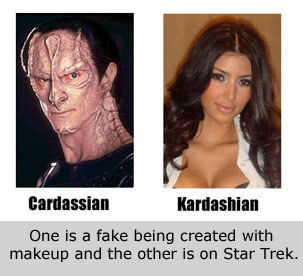 Kim has shown us, much to humanity’s collective shame, that being famous for only being famous is somehow admirable.  Thus, the goal in life is to get attention by any means necessary.  Popularity slowing down?  Get a disposable marriage to gather attention.  The point is, do anything to stay on the cover of the magazines.  There is not a single event in Kim’s life that has not been orchestrated for the sole purpose of drawing attention to herself.

But thankfully, all is not lost.  This broads popularity is dropping faster than Rush Limbaugh being thrown out of Air Force 1.  So if anything, we can use her story to show our daughters how a life of being an over-hyped Queen of Whoredom yields the expected results.   Even now the very name “Kardashian” is invoking face-palms and sending shivers down the spines of the Hollywood elite.  A candle that burns twice as bright burns half as long, so expect Kim to get more and more desperate as her wick finally expires.

I think we all saw this one coming a light year away.

The second this kid turned 18 was the moment Hanna Montana was possessed by the souls of dead Hollywood sluts.  Smoking a bong, wearing hot-pants sans underwear to nightclubs and generally being a little boozehound has sweet young Miley on the fast-track to becoming another piece of trailer park trash like Lindsay Lohan.  All while under the watchful eye of young girls who grew up liking her act for reasons I am simply incapable of fathoming.   Thus I have a message to any young pre-teen girls reading this article ( which I pray is NONE ), don’t look to entertainers as role models.  Entertainers are clinically speaking, fake people.

Much to Billy Ray’s dismay, he really only has himself to blame for encouraging her to get into the scum-sucking world of show-business.  Honestly, haven’t the Jackson 5 taught us anything???  Nonetheless, we feel your acky breaky heartfelt pain here Billy and sympathize with your situation.  So to all you parents who feel the need to live vicariously through your child by having them go to screening after screening, please give your child the best gift you can give them:  lobotomize yourself.

Never has so much advice been given by someone who knows so little.   While I respect Oprah for rising to the top and becoming successful on her own steam, I also despise her for her current role as a cult leader that feeds off the souls of her followers.

Somewhere along the road to glory Oprah felt that having a popular TV show meant she had the answers to everything from parenting ( has no kids ), to marriage ( not married ) to money ( takes it to make it ), and even sex ( see first 2 points ).   But perhaps the worst advice is the push for everyone to find their inner happiness.

Allow me to set the record straight on the truth about personal fulfillment:  Get OVER yourselves.  Do you think the starving mother in Sudan who has to feed her children by becoming a prostitute is going to find this kind of advice useful?  Or what about the Western postmodern drive for spiritual enlightenment?   Got news for you, God is not there for your personal daily buzz like a cup of expresso.   Historically, the most spiritual people led hard lives and were more often than not dirt poor.

Plus, how can anyone respect a woman that continues to force Rosie O’Donnell down our collective throats?  Come on Oprah, at least pretend like you care.

Duane “Dog” Chapman is a classic example of a racially confused individual.   Much as his appearance hides the fact, he’s actually the reincarnated soul of Vanilla Ice.   Why else would a grown man use words such as w—, m—  f—-,. and n—a in the “urban” context.   Oh jeez, my spellcheck won’t even let me print this stuff.   Technically that means my blog is more self aware than Dog.

Racially confused white people are, if I may say, a sorry sight.  It’s an attempt to take the bad grammar of another ethnic group and use it to make yourself sound cool.  In the end, all you have is a whittier than white person calling someone his n—-.  Dang spell check.  I’m trying to say nig….  Sorry.  That’s as far as it will let me go.   Now I’m not saying all caucasians need to say “okey dokey”, give the cashier a penny to make exact change or join a bowling league, but for heavens sake can’t we all just exercise some moderation?

As with all “reality television”, it’s safe to assume everything you see is fake.  I’m even willing to bet the live action takedowns are completely staged.  Top that off with the curious need for him to talk like a hardened black gangsta with so much F-Word cussing it would make Andrew Dice Clay cover his ears, the truth is Dog isn’t even a good role model for bounty hunters. 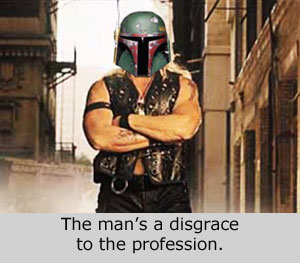 While listening to the oldies radio station on the way to work ( forgot my iPod at home, lest I confuse you all into thinking radio is still relevant ) the announcer popped in a joke to begin the next 20 minutes of uninterrupted music by saying how Gene Simmons was a proud testament of all things male because he’s had more sex than ten generations of meercats.

If you listen to the press then you’d be led to believe Gene has mated with practically every woman on the planet including our wives and teenage daughters.  And because of this a certain demographic of men ( lets call them douchebags for clarity ) think this is an admirable accomplishment.

News flash for all you guys out there: having sex with tons of women is fairly easy.  Seriously.  All you need is money.  Yes, there’s also a certain demographic of female whose beauty is only skin deep and will literally bone anything if it has a 6-figure plus income.  And if you’re rich AND famous?  Good luck ever getting your pants up.

Were it not for KISS, Gene would be either selling you a car or coming over to your house to remove the solidified poop stuck in your sewer line.  And it would be a foregone conclusion that his list of “conquests” would also drop exponentially to match his drop in income and fame.  So what’s the lesson here?  Simple.  Any average working class guy that can convince a good woman to MARRY him, STAY married to him, actually have CHILDREN with him, continue to rock his world and then finally grow old together has more machismo than a clone lab full of Gene Simmons’.  Why?  Because you’ve proven that a good woman will stick to you despite not having the perks of fame and glory.  With Gene, skanks glide off him like teflon.

Look at it this way.  A zillion girls came his way, and all of them kept going.  That’s not a success story guys.  That’s a cataclysmic failure.