I don’t know how many of you have been in a situation where you’re having an innocent Tupperware Party, and all of a sudden someone spikes the punchbowl. Things get rowdy, fights happen on the front lawn and the cops are called in when your mother runs naked down the street at 2am screaming that she’s Joan of Arc.

Such is the failed prophecy of May 21 for a great many people. The hangover has begun.

The vast, huge, and the complete majority of Christians never believed for one second that a rapture would actually take place on May 21.  It should be noted that not every Christian even believes in a rapture at all.  We just knew the juice was spiked and left the party early. But it doesn’t matter now. The damage is done and the Christian church has to once again get out the mops and clean up the puke left by immature and gullible fringe cults.

I spent a great deal of time looking over Harold Camping’s rationale before this charade and concluded very early that his conclusions were complete garbage. There were so many assumptions that it seemed the ultimate act of idiocy to ever pick a solid date based on such a foundation of imaginary numbers.    But being an idiot never stopped Harold in the past, and it sure didn’t stop him from once again being the instrument of destruction in the lives of so many.

Today the May 21 billboards stand for many as a monument to the supposed stupidity of the Christian faith.   Can’t say I blame them.  Really, who of us would think any different in their position?   Try as we might to explain that these doofuses were not actually invited to the party…our pleading just falls on deaf ears.

Nobody wants to hear that these people acted alone with no sanction from the Christian church when it’s easier to just laugh at Bill Mahr’s neo-socialist jokes. Those who mock, will mock anyway.  Unfortunately for a little while those of us who follow the orthodox Christian faith are going to have to just suck it up and be the brunt of the joke. 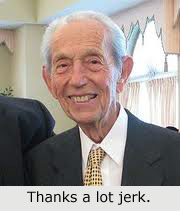 But what about the Harold Camping Believers? They just woke up to a complete stranger in bed and can’t understand why their underwear is stuffed in their mouths and they’re sporting a flashy set of nipple clamps. Their world is in complete shambles right now and they are confused, depressed, penniless and some might even be suicidal. If there’s any blood involved, it’s clearly on Harold Camping’s hands for being an irresponsible buffoon and a false prophet.

If any good can come of this, it will be that perhaps this was a great opportunity to discuss the Christian faith with people who were curious as to what the heck was going on. I had a few opportunities myself, so I guess things turned out OK.  Personally, I don’t believe in an imminent rapture at all. Me and my co-workers laughed about the situation and I made sure that they understood that these twits acted on their own and that the Bible most certainly does not “guarantee it”.

Finally, if I can offer a word or encouragement to those who believed in Camping’s prediction: You’re a freaking idiot, and this is what happens to lazy people who don’t read their Bibles. You’re also stupid for not at the very least doing a Google search on Harold Camping and getting a heads up that this “expert” was a complete fraud from the start.  You’re stupid, gullible, lazy, and you probably smell bad.  Now find a decent church and shut up until you learn some basic life skills.

Yep, I know. I should have gone into counseling. 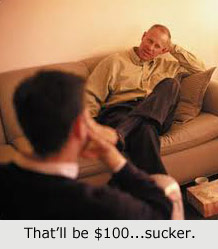