It wasn’t that long ago that the Mormons and Jehovah’s Witnesses were knocking on my door wanting to give me the “Good News”. Well, their version of it anyway. So I made it a goal to study up on these groups big time, even going so far as paying a visit to the LDS Institute of Religion in Edmonton to go through their books firsthand and just about emptied their photocopier of tonor in the process.

The main weapon of any cult is to distill information before it reaches the masses. Jehovah’s Witnesses are particularly effective at this by means of using fear. Mormons accomplish this by means of owning a State…which you have to admit can’t hurt.   Both also use excommunication as an effective deterrent.

However, a little something came along that more or less feels like it’s making the cult evangelist obsolete…the internet. 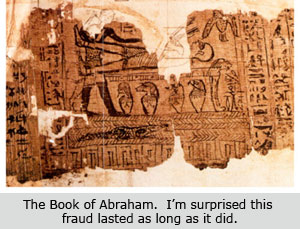 I remember bringing up “The Book of Abraham” with a Mormon only to have them reply back that I was merely parroting “anti-mormon” literature…that being anything that doesn’t agree with them.  By that definition, the Book of Mormon itself is anti-Mormon as none of the odd doctrines they cling to are in there at all.

Now…hey, go to Google and look it up yourself pal…multiple sources saying the same thing. Even Mormons apologists can’t answer the obvious fraud they have built their religion on. The mind starts to think and eventually realizes it has been had. The industrial revolution keeps on turning.

Even the Salt Lake Tribune admits declining numbers in the state’s Mormon population. In July 2006 the paper published an article that discussed the shrinking LDS population of the state of Utah.

Adherents to the Watchtower can also grab a sneak peek online and quickly discover that all the Christian “apostates” were bang on the money regarding the Watchtower Organization’s history the whole time. Numbers appear to be flat or in decline in countries with internet access. The Watchtower goes out of its way to publish encouraging statistics, but neglect to take into account people who leave.
In Japan alone over 600 congregations disbanded, but those numbers are still reflected as members. Witnesses are shrinking in number in many Western countries as of the last few years, as the Internet facilitates the spread of information (much of it critical of the Witnesses). 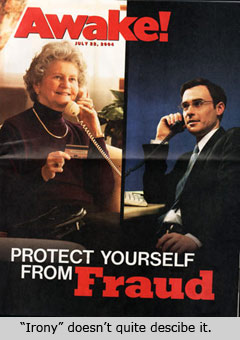 This also explains why the Watchtower is almost totally neutered when it comes to evangelizing the 16-35 age range. This demographic is comfortable with technology and finds no problem learning everything they need to know about the Watchtower Bible and Tract Society by merely going to a Search Engine. When was the last time you saw a JW under the age of 50? I’m guessing it has been awhile. If you don’t believe me, then take a peek into a Kingdom Hall.

Well, the numbers for most cults may be in decline, but that’s still no excuse to get lazy because these organizations are not going to just roll over any time soon.

So carry on with the good work in His name my fellow travelers, and remember: blowing the tires off a false religion is fine and dandy, but we must also try and communicate the true identity of the historic Jesus/Yeshua in love and patience.

This is where the real work begins.