Previously, I theorized that declining numbers in the Mormons and Jehovah’s Witnesses were primarily due to increased access to information in the form of the internet.

There is however, a secondary reason that we should not ignore; that being a changing social attitude on how we approach our theistic beliefs…by asking questions and not hiding from our doubts.

In the old days making a convert was much like making Sea Monkeys.  A little water, a little light, throw in a Bible verse and PRESTO…instant cultist, happily swimming through whatever hoops the head organization puts in the water. All the while blissfully unaware of life outside the tank.

Well, those days are over. Done.  And they’re not coming back.  The old Sea Monkeys are dying off. 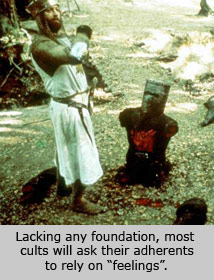 What happened?  Society it seems is no longer accepting the status-quo, and what happens outside the fish tank eventually affects what happens inside.  Information is like a narcotic, and once you get a little you want more.  Because of this, any faith that requires you to cease thinking is a faith grounded in a quagmire.  If you can’t state a reason why you believe in something that doesn’t go deeper than “because Person X told me so”, don’t go around expecting your argument to be worth a tinkers damn.  Today people are asking questions more than ever, and are sick and tired of simple pat answers.  This goes for politics, religion…even atheism.  Nobody is innocent of grasping onto a belief system out of convenience.

We’ve all heard the same tired line from somebody who says, “I know it is true because I feel it” Well, that might as well be the white flag of surrender.  It reminds me of the Black Knight in Monty Python’s “Holy Grail” who is unwilling to admit defeat even though all of his limbs are cut off.  All this kind of response has shown is that the person believes “thinking” is secondary to “feeling”.  That is not now nor has ever been something the Bible has condoned…quite the contrary.  Mormonism excels at this as the church has repeatedly told people to “pray” about the Book of Mormon.

And for the LDS Church, that is a smart move, because telling people to study history or archeology is a fast way to shoot themselves in the foot.  For a book that its founder claims is more true than the Bible ( which has endless archeological backup and is much older, compared to absolute zero for the BofM ), it would seem we only have Joseph Smith’s word to go on.

After the Part One posting, I actually got a few “testimonies” about how the person “knew” the LDS church to be true. All of them fell back on “feelings” and never dealt with legitimate and blatantly obvious hoaxes such as the Book of Abraham, Kinderhook plates, or the reality their founder was a complete fraud.  Sorry people, not good enough.

To those people I say…you’re a thinking individual, not a Sea Monkey.  Climb out of your tank and take a look around.  Truth does not hide from scrutiny.

Beyond feelings, FEAR also can only hold onto a person so long in much the same way we all grow out of our childhood fear of the Boogeyman.  The Watchtower Organization has been promising that Armageddon has come or is coming…soon…any day now…get ready… Before you knew it, half the 144,000 “annointed” class required to be alive are already dead and the organization is quickly rewriting its own history so fast it makes you wonder if you’re reading George Orwell’s 1984.

Whenever I bring this up with a Jehovah’s Witness, they get mad.  Fuming mad.  At that point I simply must “sigh” 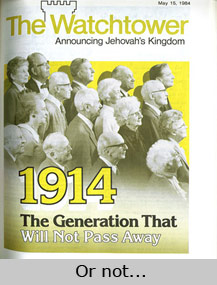 because the personal insults come fast and furious.  Let’s see…I’ve been called apostate, damned…oh oh!!!…”whore of Babylon” is my favorite!  They must save that one for my door in particular. Man, it’s nice to know you’re appreciated!

Don’t be afraid to use it. Life outside the tank awaits you.