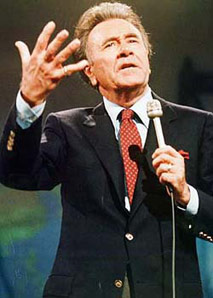 Oral Roberts is often is credited with taking the Christian message to television, helping make Pentecostal Christianity mainstream, and thus bringing greater acceptance of divine healing and laying the foundation for “prosperity gospel”.

Whether that’s good or bad news depends on what part of the Christian worldview spectrum you come from.

As a young boy, I was well aware of the ministry of Oral Roberts.  His name was synonymous with what I believed at the time to be the evangelical Christian movement.  Only later in life as I studied religions exhaustively did I realize Oral had his own particular brand of “name it and claim it” preaching that had little in common with preachers such as Billy Graham.

If Billy Graham is the simple meat and potatoes of the gospel, then Oral Roberts was certainly the Chateau Briand with Romanée-Conti Burgundy of the prosperity gospel.  Although the core of Robert’s message contained some foundational principles of Christianity, it was where he differed that caused him his most success, and his deepest failures.

My Dad, a cautious believer, was never a fan of television preachers and had many a good laugh over Oral’s supposed visions.  The “give me money” or “God will kill me” line or the 900 foot Jesus visions did little to persuade him and were the punch-line of many a joke.  From this point in his ministry, Oral opened himself to public scrutiny and began to be defined by serious doubts about his credibility.  In the meantime there gave birth a modern breed of millionaire parasite televangelists who were far less credible than even their questionable successor.  Jim and Tammy Bakker.  Robert Tilden.  Benny Hinn.  Kenneth Copeland.  Peter Popoff. The message switched gears from one of faith in Jesus, to one of faith for the sole purpose of monetary gain.  Always their own.

Not to label him on the same level as these bottom feeding, salvation for sale con-men…it should at least be noted that Oral Robert’s did accomplish some good in his ministry.  I’m sure many came to a saving faith due to his intervention.  Possibly he even did miracles…who knows?  But we should not overlook the unfortunate error in his message.  It is a message that pervades even today in the dusk of the televangelist freak show.  It is the notion that as a believer we are entitled to “lots and lots of stuff”.

For many, wealth is indeed given.  For many more it is not.  For countless masses, faith in the midst of abject poverty and persecution is what must be endured.  God’s favor is not and never has been measured in the property you own and the size of your bank account.

Christ’s request of the rich man should be proof enough of that.