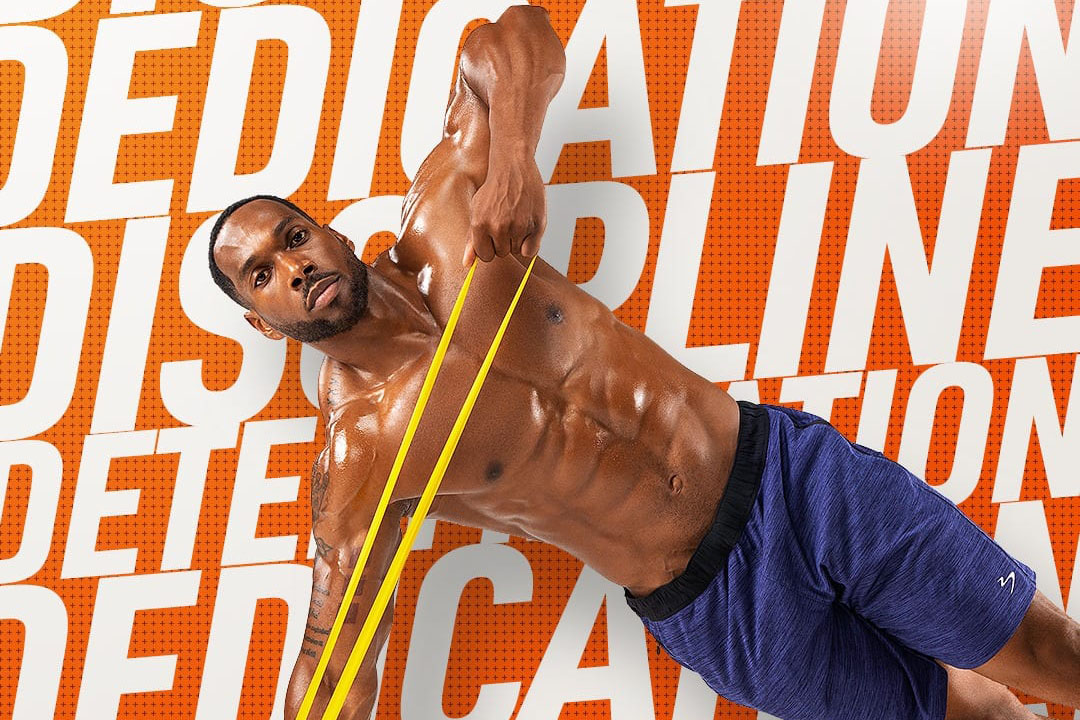 6 Weeks of The Work

The experienced fitness enthusiast will find '6 Weeks of the Work' challenging. Beginners should look at '4 Weeks of the Prep' before pursuing.

After a few weeks of house arrest and using the opportunity to start up the Dysfunctional Parrot YouTube Channel, it was high time to get back to another review.  If tyrannical quarantine, ineffectual laws, and pointless arrows on the grocery store floor have taught me one thing these last few weeks, it’s a new appreciation for the fine art of cussing.  Therefore, reviewing 6 Weeks of the Work by Beachbody is rather time appropriate.  The main reason is that for the first time, Beachbody has seen fit to give their workouts an “Explicit” label.

A set of light, medium and heavy weights.  Think P90X-level heavy, not necessarily Body Beast.  A resistance loop is also used, but can be modified for use without.  They also make use of the sliders from 80 Day Obsession, but unless you’ve got deep pockets I’d modify or find a couple Frisbee’s at the recycle store.

We meet our trainer, Amoila Cesar.  A straight talking, charismatic chap who better stay clear my mother if he wants to avoid eating soap.  He has the casual banter of Tony Horton in a subdued way, and the street talk of Shaun T minus the constant references to himself in the third person.  It’s an ironic mix since the series is very much cardio/resistance in nature.

Each workout has a series of rounds whereby work is done for generally 60 seconds, and going down in time as each round progresses.  For example, in WEEK 1 – PUSH,  4 rounds of 60 seconds of work kick it off, then down to 50, 40, and finally 30.   What will become apparent very quickly is that this series is NOT for the uninitiated beginner.  Moves like Slider clap-push ups are not of this world.  So if you’re patting yourself on the back for finishing YouV2, sit your ass down and shut up until you have something intelligent to say.

Oh, and you’re probably wondering just how prevalent the swearing is.  I’m not going to count every workout as that will get tedious, but here is the cuss tally for your introductory class of Week 1 – Push:

Each day will have a different focus.  Push looks at presses and push ups.  Legs with plyometrics and squats.  Pull is chin/pull ups and rows.  Other workouts like Endurance and Agility are speed/cardio routines.  As each week progresses, things generally add a slightly higher level of difficulty.  Occasional death-rituals like The Crucible will push you to the limits.  With that one, the f-bombs begin dropping only seconds in, which I suppose is a sure sign we’re in trouble.  It’s death by reps.  I lost count due to passing out in a pile of tears.

A piece of equipment that gets increasing usage as weeks roll by is the resistance loop.  While I initially felt this was another optional gimmick, there are enough places it is used that owning one might not be a bad idea.

By the time you hit Week 3, the names of the workouts might sound the same but the moves become increasingly compound or are different entirely.  They build on each other by adding bands or additional motions.  Expect your co-ordination to have some level of improvement by this time.  Or at least it better if you hope to survive the next three weeks.  That also brings up an important point: don’t feel you need to do the whole 6 weeks uninterrupted.  I found that on several occasions my body ( legs in particular ) was telling me to go straight to Hell because things were just being fatigued too much.  On those days I did a simple weight training or recovery routine.  Much of this was my own fault, as in order to get the review done I often doubled up ( being forced to work from home has its advantages ), or skipped the occasional recovery workout.  If you can back off when necessary, you stand a much greater chance of going the distance.

I think by the time I hit Week 6: Crucible ( 100 reps.  Deal with it. ) my body was absolutely faster than it had been in months.  Well, most of it.  When week six rolls around, you should have experienced one of two things:

Much of this will depend on what condition you were in at the beginning.  While Six Weeks of the Work is hard as any workout I have ever engaged in, it also does so by jamming a lot in in a short amount of time.  Doing more in less time has benefits…but it also has consequences.

As such, if you have made it to week six injury free, you’re probably not a fitness blogger approaching 50 who is prone to glitches if he rolls out of bed wrong.  I suspect many will likewise hit a few roadblocks.  I pulled a bicep in Week 4 and have been nursing it since.  In many cases there just isn’t enough time given to priming the engine.

Well, if you like working out with the kids, might I suggest using the edited version?   If not, re-evaluate your parenting skills.  This of course means I need to first address the first question: the profanity.

Everyone will have a different comfort level when it comes to colorful vocabulary, so my tastes won’t necessarily reflect yours.  I don’t mind it, to a point.  I understand being told to ‘move your ass’ like a Drill Sergeant breathing down my neck, so that comes with the territory.  There is also a pattern to the profanity…the first half usually remains benign.  Then it slips in some tamer “damn” or “ass”.  The second half is where the heavy-hitters come in, so that allows you enough time to wheel grandma out of the room and sit her in front of Wheel of Fortune.  Personally, I found the f-bombs entirely unnecessary and made it seem trashy.  The program gained nothing by it.  But good news, a beeped-out version is available to watch.

Production values do take a score hit.  There is no music track, but that can also free you to work out to Engelbert Humperdinck’s greatest hits.  They do provide a Spotify list, but for me it was more a pain than it was worth, especially if you’re using Airplay and expecting the workout to randomly quit due to a buggy app.

There is also no status bar and that is something I really missed.  I honestly don’t know why Beachbody is cutting this corner lately as it removes a truly handy feature.  The set looks like it was recycled from “Week of Hard Labor” but still has a pleasant, cross-fit feel.  It’s all fine enough, just not extra-mile.

The trainer?  I think BB might have struck gold with Cesar.  At least once my mom washes his mouth out with Irish Spring.

For those who have long tried to create a hybrid P90X/Insanity ( weight/cardio ) workout, this might be as close as you get in one package.  Be advised, your potential for injury is high with this program.  So suffice to say, 6 Weeks of the Work is not a good choice for a beginner.  For example, while you do indeed save time by doing barbel curls and side squats, it also means there are multiple points of failure that can happen if you’re not up to speed on good form.  There is an intro program called 4 Weeks of the Prep, so give it a look if you’re new to this stuff.