The review continues as the Dysfunctional Parrot keeps climbing the mountain of Body Beast.  Thus begins the analysis of Phases 2 and 3. 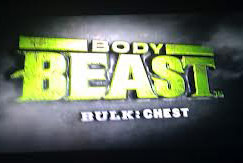 Dynamic sets of death.  You start off with incline presses meant to do some serious damage to your upper pecs and then you move into regular presses and decline push ups.  Sounds easy?  WELL IT ISN’T!  Each set is progressive starting with high reps/low weight until and moving up to lower reps/higher weight with a freaking drop-set at the end that makes your chest want to slide off your skeleton.  In short, if you want the kind of huge pectoral muscles that Ren prayed for ( Ren and Stimpy inside joke ) then this should do it.

My goal?  I want to be able to do that pec-twitch like that bad guy Chong-Li in Bloodsport.  Chicks dig that. 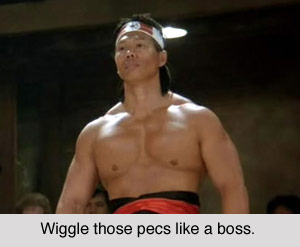 Sometimes life isn’t fair.  Some days, you just have to do a leg workout that means business.  And the non-stop dynamic sets in Bulk:Legs will deliver.

If you’re not screaming like a tortured banshee during the Progressive EZ Bar Split Squats, then you’re not doing it right.  15 reps, 12 reps, 8 reps then do it again in reverse.  Sweet mutha…

After a roll call of squats and presses, you’ll end off with 2 sets of 50 calf raises.  Yes, fifty.  Don’t worry, it’s only as painful as it sounds.  Final analysis?  This will thrash your legs like nothing else will, so don’t skip your protein shake unless you want to walk like your octogenarian grandmother the next day.  Pure gold.

Best Line:  “Did you say your prayers?  Did you eat your vitamins?” 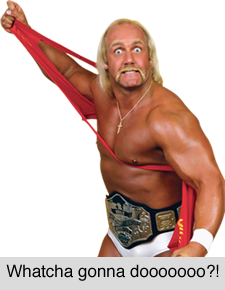 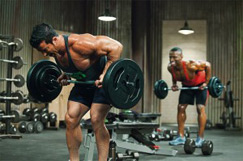 In many ways this is the same as Back and Biceps…minus the Biceps.  This is a traditional back workout with pull-overs, pull-ups, dead-lifts and a particularly agonizing force set ( do 5 reps, hold at bottom, repeat 5 times with same weight…sounds like it feels ) of one arm rows.

Bulk: Back lasts for only 29 minutes, but it is enough to get the job done because you won’t spend a second of your time screwing around.  And considering that tomorrow is Arms day, I won’t complain.  In fact, take the extra time you have and get some good stretching in. 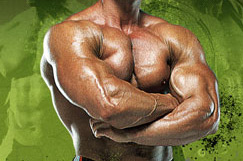 This is alternating between biceps and triceps doing progressive, single and force sets.

I can’t even begin to describe what it is like to arrive at 35 pounds in a progressive set and end it being unable to do a 10 pound bicep curl without screaming for a shot of morphine.  This workout is just plain sick.  So choose your weight wisely unless you want your spouse to come running down the stairs in panic over your cries of agony ( I think my wife is really starting to worry about me ).

On the surface it might appear that BUILD: Shoulders and BULK: Shoulders are two similar workouts but the differences will become apparent once you grab the weights.  What makes the BULK version different is the addition of Progressive Sets ( rows and reverse flyes ).  So I would say the end goal is different.

Resist being tempted to use the same weight as the BUILD version.  Doing 35 lifts non-stop in a Progressive Set with the same weight as a standard Single Set would be lunacy.  As someone who deals with recovering from a shoulder injury, don’t crash and burn due to ego. 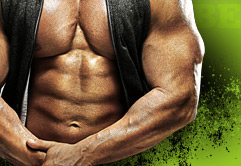 Many moves are also stuff you’ve probably seen before in P90X or Insanity, but there are a few surprises to keep you interested.  Yet what I appreciate about this is how Beast Abs respects your time.

In terms of intensity, I’ll be honest…P90X and X2 Ab Ripper are slightly more intense.  However I’m going to give Beast Abs kudos for lower-back core work and the option to use some weight.  Plus there is nothing easy about it as many new moves had me stopping to regain composure ( Bucket Drops are a killer ).  Beast Abs is usually done after Cardio and is done once a week and only occasionally twice.

But is once a week enough?  In my opinion, yes as the whole Body Beast program works your core, and most workouts have a 1-minute abdominal move at the end anyway.  Just remember, true abs are made in the kitchen.

Once you have completed the BUILD and BULK Phases, the program has one more block called the BEAST Phase, which is a combination of workouts from the first 2 Phases.

First the Weaknesses.  Body Beast has practically no stretching to speak of and as such I believe this will make you more prone to injury over time.  That’s why I personally would recommend incorporating flexibility or yoga into your regimen.  Again, this depends on your goals.  If you want to be only big then by all means do BB and ignore all else.  But my fitness philosophy is to be versatile, fast, durable and muscular ( or Batman, if you will ).  Body Beast can absolutely be a part of that as long as you take care not to ignore the missing components.

The workout sheets are also good for only one workout, so referencing past accomplishments will require you developing a system to look back.  I’d suggest making your own sheets in Excel.

And finally ( and this really isn’t a “con”! ), you may also find yourself talking like Sagi.  On more than one occasion I have approached my wife asking “you like big boy, no?” while flexing a pose.  All I can say is she’s a good sport about it. 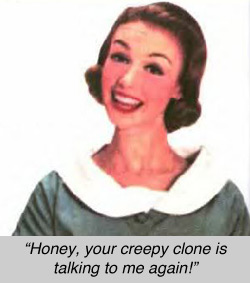 Now for the STRENGTHS.  Obviously Sergi’s role in the Israeli Defence Forces was to deflect Hamas missiles with his chest.  The guy is a machine.  I can say without reservation that I like his style and I definitely like what I see with Body Beast.

The quality of this production is top notch, as the time bar even has expected rep counts under each move.  Very handy.  The music is also great.  Perfect tempo, tone and not intrusive at all.  Plus you can shut it off if you feel otherwise.

And the million dollar question…is this harder than P90X or X2?  Yup.  ‘Fraid so.  Body Beast will drop kick your ass as if the Hulk picked up Tony Horton and started beating you with him.  Body Beast is super concentrated punishment in one area while P90X is spread around over multiple facets of fitness.  That means yes, Body Beast is harder, but not necessarily better.  Like I said, it depends what you want.  Remember when comparing that neither P90X, X2, or Insanity were ever designed to give serious muscle mass.  This is.

Give credit where it is due.  Body Beast is a program that claims to create that muscle.  It doesn’t promise flexibility, speed, firm thighs or anything besides just getting you big.  And it seems like it will accomplish its mission in spades.  And because it is true to itself and delivers I have to give this a solid 5 Feathers out of 5.  There’s nothing else out there that can measure up to this for home body building in terms of professional production. If Body Beast can be a regular part of a workout cycle ( 1 month P90X/X2, 2 months Body Beast, 1 month Insanity/Asylum for example ) then wow…your physical fitness future looks bright indeed.

Finally, Beachbody delivers something for those of us who just want a round of lifting heavy things, and they found the perfect guy to host it.

Sagi can sometimes be a bit of a dick